Would you want 46 megapixels in a camera sensor? 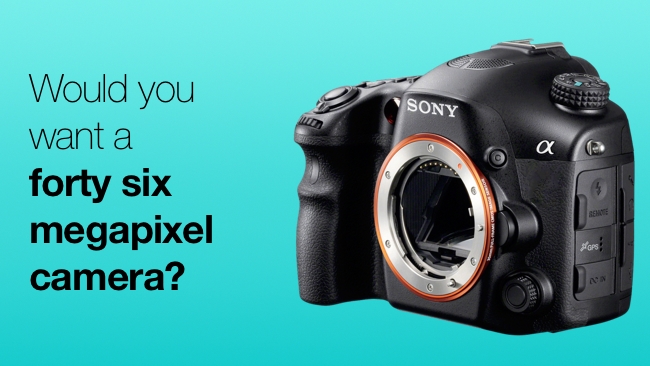 Would you want a 46 megapixel camera?

Do we really need more pixels?

We've just seen some rumours of a new Sony Alpha camera with a 46 megapixel sensor. That sounds like a big number, doesn't it?

Well, it is. But we're just not sure how relevant it is to video. Or even to still photography, for that matter.

Not much difference in linear resolution

Meanwhile, the Sony A7S has only 12 megapixels and takes fantastic-looking, cinema-quality video. It's definitely the case that the A7S's video looks good is at least partly because it has so few pixels, which are bigger and therefore more sensitive to light. All of this adds up to less noise and a better picture.

That's all fairly uncontroversial.  A big question, though, is how you actually use all the detail from a camera with a 46 megapixel sensor. After all, it's hard enough focusing in 4K, never mind in somewhat greater than 8K!

Well, perhaps the answer is actually quite simple: don't even think of using these cameras for video unless you can meet the same sort of conditions under which it would make sense for a still photographer to use them.

You'll need extremely sharp lenses. It's unlikely that the sensors in these rumoured cameras will be particularly sensitive, so you'll need good, controlled lighting. And then you'll need to focus very precisely, because if you don't, all those extra pixels will be wasted.

Makes sense in a studio

All of this might make sense in a studio, and we suspect that's where these cameras might be used.

We don't even know the sensor size yet. 46 megapixels would be more appropriate for a medium format camera, perhaps.

All of us at RedShark love still photography as well as video, so we're excited by the Sony rumours as well as similar Canon ones.

But we don't think we'll be rushing to make video with these cameras if and when they appear - unless they have onboard processing powerful enough to downsample the 46 megapixel images to 4K or HD.