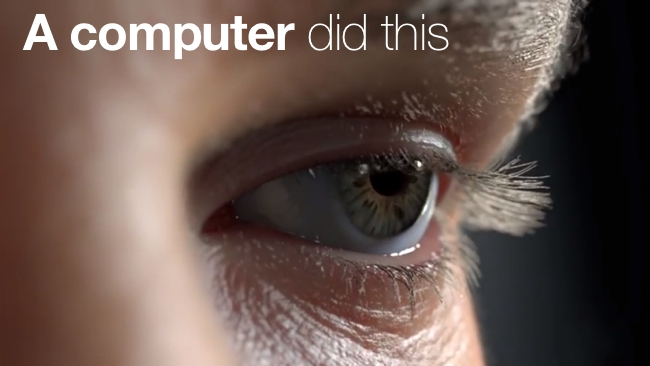 The human face is surely one of the most challenging objects to animate realistically. To make it look completely real takes a very special kind of talent

When you look at this video, the first thing you think isn't "that's a very good 3d animation of a face". Far from it. What you actually think is "that's a face". And that's a huge compliment to the designer (who, contrary to our caption in the photo) was actually a human, Chris Jones, and not a computer.

The minute you get close to imitating a human - whether it's the face or the body - you come up against the now well-known phenomenon of the Uncanny Valley. This is the chasm that you have to cross to attain believability in your animations. What's really odd about it is that the dynamic should be: "the better the animation, the more real it looks". Simple enough, you'd think. But, bizarrely, when you get close to photographic authenticity, there's something in our brains that says "hang on, there's something not right about this". In fact, we start to be uncomfortable or even afraid.

Some psychologists think that this is because our "Old Brain" - the part that has been around since our ancestors were amphibians - is telling us that if something we recognise is behaving oddly, then it is dangerous.

It's these messages from our Hippocampus and Amygdala that make we have to defeat by making our animations so perfect that we don't even remotely suspect that they're not real.

Chris Jones has got closer to this almost unattainable reality than anyone else we've seen. You can watch an earlier version of his work here, and here's his latest masterpiece: