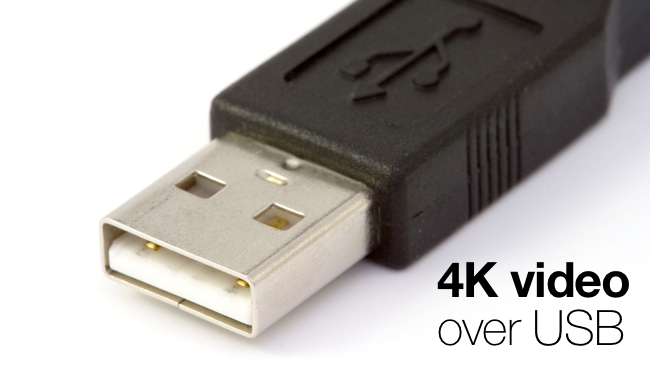 USB gets even more versatile

Anyone who curses when they try to plug in a USB cable would do well to remember what it was like before this ubiquitous connector. Setting up SCSI, Parallel and Serial cables was decidedly tricky compared to the plug-and-play abilities of the USB connection.

But it's still really, really annoying when you're fumbling in the dark, or around the back of a computer, trying to get it in the right way. Sometimes you start to think that it doesn't fit in any way round.

So it will be something of a relief when USB type "C" arrives. This new format is designed to be reversible. This will be a very good thing, although all those existing non-reversible sockets and cables won't just go away.

But for new equipment, the future for fellow cable-fumblers is bright. And it gets better, because VESA has just announced that they've managed to shoehorn a 4K video signal at 60fps into a USB connection as well.

Using "DisplayPort Alternate Mode" on a USB Type-C Standard connection, a full 4K at 60fps can be delivered to a monitor. The DisplayPort signal is carried unchanged through the USB connection, which helps to make it compatible with existing devices.

All of which means that we're moving closer towards a time when we really will only need a single cable for almost all purposes, with only the slight caveat that Thunderbolt already promised this, and is actually available for anyone using a modern Apple Mac.

The trouble is that very few people have ever seen a Thunderbolt port on a PC, never mind a mobile phone.

Mobile manufacturers like the new type "C" connector because it is extremely small and, because it is reversible, easy to use. The ability to carry 4K video is more likely to push adoption of the new standard, and since people tend to change their phones faster than their computers, we might see this being widely adopted on a fairly short timescale.

VESA utilized the Alternate Mode functional extension of the USB Type-C specification in the development of this new Standard. The DisplayPort Alt Mode repurposes some or all of the four existing SuperSpeed USB lanes to deliver full DisplayPort performance, and uses other signaling available in the USB Type-C connector for DisplayPort’s AUX channel and HPD (Hot Plug Detection) function. This enables computers, tablets, smartphones, displays, and docking stations to implement the new USB Type-C connector at both ends while using the DisplayPort Standard over USB Type-C to transmit high-resolution A/V along with USB data and power.

“The USB Type-C specification was developed to provide consumers with a robust connector for everything from mobile devices to PCs, and when combined with SuperSpeed USB 10 Gbps and USB Power Delivery, it truly enables a single cable solution for the market,” said Jeff Ravencraft, USB-IF President and COO. “The USB-IF is also in the process of developing joint port identification guidelines. We’re working with VESA to ensure consumers can recognize when DisplayPort Alt Mode is supported on USB Type-C devices.”

Like USB, DisplayPort uses a packetized data structure and differential AC-Coupled signal “lanes” that carry high speed data with an embedded clock. This allows the same electrical circuits and cables to carry either SuperSpeed USB data, at up to 10 Gbps per lane, or DisplayPort, at up to 8.1 Gbps per lane, as defined in the new DisplayPort 1.3 Standard. Early implementations of DisplayPort Alt Mode USB Type-C devices will likely use existing DisplayPort 1.2a capabilities that support up to 5.4 Gbps per lane. Using 5.4 Gbps across all four high-speed lanes will support up to 4K (4096 x 2160) display resolutions at a 60Hz frame rate with up to 30-bit color.

By leveraging USB Type-C’s flexibility, the DisplayPort Alt Mode can choose to transmit on just one or two of the four available lanes, so that the other two lanes can be used for SuperSpeed USB data at the same time. In a docking station connection, for example, the use of two lanes for DisplayPort at 8.1 Gbps per lane would allow simultaneous transfer of SuperSpeed USB data (up to 10 Gbps in each direction) while also supporting a 4K UHD (3840 x 2160) DisplayPort monitor. The dock can also be configured with DisplayPort protocol converters to support HDMI, VGA and/or DVI monitors. When using all four lanes for DisplayPort Alt Mode, which could drive a monitor with up to 5K (5120 x 2880) resolution, USB 2.0 data can still be carried across the USB Type-C connection using separate pins dedicated for that function.

“DisplayPort has played a vital role in advancing display performance and connectivity for platforms that are increasingly integrated and compact,” said Craig Wiley, Senior Director of Marketing at Parade Technologies, VESA Board member, and VESA Marketing Task Group Chair. “In addition to the dedicated DisplayPort connector, the DisplayPort Standard has become an important ingredient in other wired interfaces, such as ThunderBolt™, DockPort™, MyDP™, and Embedded DisplayPort™. The opportunity to utilize the USB Type-C specification to develop the DisplayPort Alternate Mode helps further VESA’s vision of common-place high performance video interfaces.”