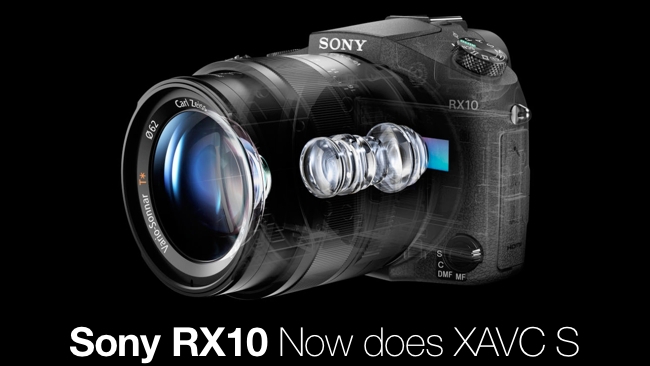 Higher bitrates are also supported and although XAVC S supports 100 Mbit/s recording at 4K, it's not clear how this will apply to the RX10, which is not (yet) capable of 4K recording.

XAVC-S is essentially the same compression format as Sony's XAVC, used in its high end professional cameras. The main difference is that XAVC S is wrapped in an MPEG 4 container whereas XAVC uses an MXF OP-1a wrapper.

This is important news for current and potential owners of the RX10. It's already a very capable video camera, which uses Sony's 1 type 1" sensor and Sony's Bionz X processor, that is able to downsample from the whole sensor, giving a very clear video picture without any of the "line skipping" and moire issues found with other cameras.

Being able to record in Sony's higher quality codec means that this camera is now a very strong candidate for professional use. It's a fixed lens camera with very high quality Zeiss glass and a constant F2.8 aperture. We have found that the lens is so good that much of the time it makes up for the camera not having interchangeable lenses.

Another small thought: this is the kind of upgrade that before this generation of cameras would have required hardware, not just firmware. We think it's likely that Sony is rationalising its entire range of dedicated chips to include all the common options. This makes it easier to differentiate between products without having to make them physically different.

We're almost daring to wonder whether the RX10 might ultimately be capable of recording in 4K. We have no inside information on this but as far as we can tell the chipset and sensor are the same or similar to the 4K AX100 and its professional sibling, the PXW X70, which has a 5K upgrade coming next year.

Read or full review of the RX10 (obviously before the XAVC upgrade was announced) here.

Here are the full details of the upgrade, on Sony's support site