Incredibly detailed CGI faces, but are they convincing? 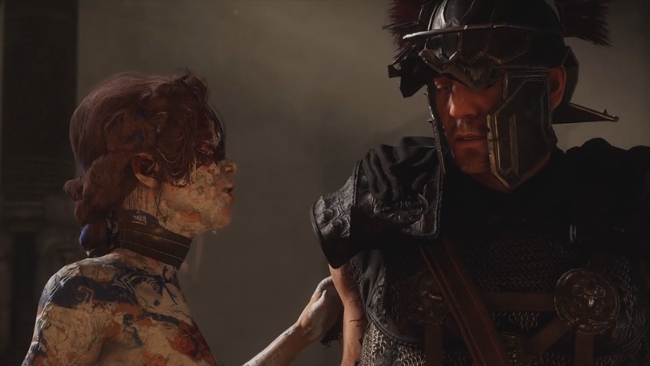 3D animation company 3Lateral shows off an impressive facial rigging demo from its work on the Xbox One release title Son of Rome. Plus, a bonus video of the 3DLateral scan process!

Since last year's debut of 'next generation' video game consoles, particularly Sony Playstation 4 and Microsoft Xbox One, video game producers are racing to get up to speed on these powerful platforms, as the pumped-up processing and graphics specs mean raised expectations over the previous generation.

It will take years for producers to squeeze every ounce of capability from these machines, but after viewing the animation work on Ryse: Son of Rome, an Xbox One launch title produced by Crytek (that will be released for Windows later this year), it's obvious that we can look forward to a future of even more realistic animations, in games and beyond.

Here are some insights from a 3DLateral rep (the effects house responsible for the game's animation system), taken from its Vimeo page:

...about 70 scans were taken at Infinite Realities Ltd. which we tracked and used to produce context sensitive digital doubles in Maya. Cubic Motion Ltd. then took the video from full performance capture and built a rule based solver for connecting muscle contractions from video to our digital double in Maya.

This is a FACS [facial action coding system] rig based on tracked 3D scans. It's not cached animation, it's an actual parameterized facial animation system. Pipeline used full performance capture which mimicked actor's performance - just so happens that in these particular scenes actors didn't move brows much.

[A commenter asked: "but animator can still improve the face animation with some layer...or once the face is scanned...you have to keep it the way it is?"]

Yes, they can and quite easily because animation system has contextual shapes which take care of the deformation. So if an animator needs to have a character looking some other way or add a smile throughout the performance - it's just an animation layer with few keys. Usually the process is to get animation solved 1:1 with actor's performance and then edit for additional artistic effect. This is one of the big advantages of this system!

In other words, scans get transformed into digital models; performance capture is used to reverse-engineer the rig, down to a solver that incorporates muscle contractions. While the process starts with scans, the result is a flexible rig that can be adjusted to fine-tune performance.

With this latest batch gaming consoles, the bar for graphics and animation is definitely being raised. If Ryse is indeed a snapshot of where we're at, just imagine how amazing the games will be at the end of this console generation. Is it too early to plop down dough for a Playstation 5 pre-order?

Check out the facial rigging demo for 'Ryse: Son of Rome' below. And don't miss the 3DLateral Scan Process video on Page Two.