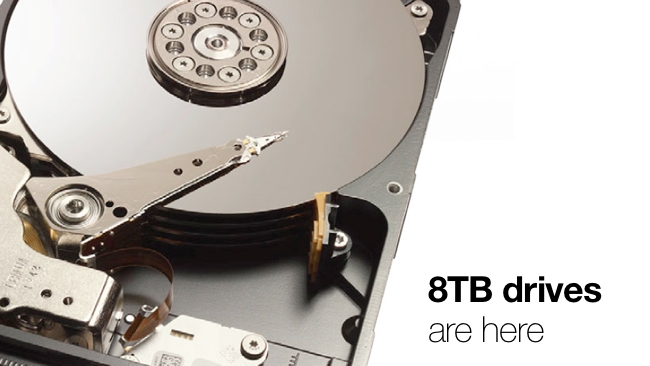 8 TB Drives are here (Picture is of a 4TB drive)

"Big" seems almost an inadequate world to describe the new generation of drives.

You can tell how old someone is by how small a drive they remember buying. Actually, we're old enough to remember wax cylinders, but let's not talk about that.

Even those of us who are young enough to barely remember the last century probably recall buying drives in the low tens of gigabytes. It's easy to forget that a gigabyte is actually quite a lot. If you're a professional writer, and have been all your life, you can probably store everything you've ever written, in plain text, in a gigabyte. You can even store over three hours of mono CD quality audio. DVDs are only around 9GB. That's enough for a three hour (highly compressed) film. Compared to these examples, a terabyte is positively cavernous.

But now (but currently only if you're an OEM customer of Seagate's) you can buy a drive with eight of these things. Eight terabytes! That is a lot. The trouble is that you need at least two of them in a mirroring arrangement because, honestly, would you want to store that amount of data on a drive that isn't backed up?

According to The Register, the new drives are 3.5" with a 6Gbit/s SATA interface.

No word yet on spin speed or the number of platters used to achieve this monstrous capacity.

Recent history has shown that however much storage we have available to us, we'll invent a higher-resolution video format that will soak it all up. So don't expect these 8TB monsters to be anything more than milestones on the road to infinite storage.