Why I'm excited about the Blackmagic URSA 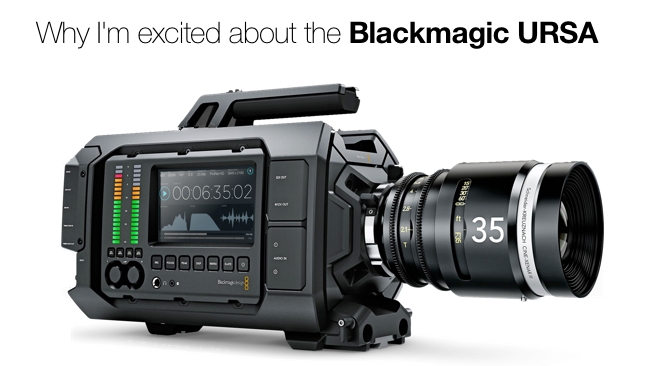 Why I'm excited about the Blackmagic URSA

Blackmagic's URSA is a radical departure. It's exciting. Here's why.

I am genuinely excited about the Blackmagic URSA. It’s not available yet, but I have seen it (at April’s NAB show in Las Vegas, on the day it was announced). It seemed pretty remarkable then, at the Blackmagic press conference. It was a complete turn-about for Blackmagic, who, up to then, had built fully-functional cameras with the minimum of physical facilities or ergonomic considerations (relative to conventional film cameras). But with so much going on all around us at the show, I think perhaps some of the new stuff about this camera didn’t really sink in.

We are in line to get one of the first URSAs when they’re available for review, but before then, I thought I’d just reflect on how and why this new type of camera is a bold and brave innovation, and how it might be received by the camera-buying public.

First of all, it’s big. You can’t miss that. It’s big enough to have three display screens that are themselves bigger than anything you’d find on any other camera.

And it’s modular. This is the thing that really gets me. You don’t have to throw everything away if a new sensor type comes along. The modularity even extends to there being different front ends depending on whether the camera’s to be used in broadcast or film (so to speak) and there’s even a version with no sensor at all!

I just want to make it clear that this article isn’t really about what sort of video quality I’m expecting from the camera (We’ve just seen our first example) . And you have to ask why anyone would want to pay perhaps three times the price of a good DSLR-type camera for the URSA, when devices like the Sony A7S can shoot the sharpest 4K that I’ve ever seen in a cinema.

But I think they probably will, if they can afford it and if they “get” the advantages of a big, modular camera.

Let’s look away from Blackmagic for a minute and consider why you might want a modular camera in the first place.

“Conventional”, analogue cameras - the type that used film (ask your parents about them…) - were intrinsically modular, with interchangeable lenses, and interchangeable sensors. Except that they didn’t have sensors at all, because the film itself was the sensor. So if you wanted a new “sensor” you just had to change the film - and you’d have a camera with a completely new set of imaging characteristics. In fact, apart from internal reflections and other small factors affecting the optical pathway, analogue cameras had very little effect on the optical quality of the images they produced (older camera experts will tell you that this isn’t true, and that factors like the shape of the iris blades, and many, many other elements within the camera could influence image quality - but my point is that was is primarily the lens and the film that determined an analogue camera’s “base” look).

But with a digital camera, the sensor is the film. And you can’t change it. What you can do is apply all sorts of modifiers to the images that come “raw” from the sensor, and this - if the quality and depth of the images off the sensor are good enough - outweighs the advantage of being able to use different types of film, but, with most cameras, if there’s a new type of sensor available, you have to get a new camera to use it.

Ideally, someone would design a camera that could take any kind of sensor. But that’s not going to happen yet. I wouldn’t rule it out, but it would take all kinds of standardisation that we don’t have yet. For now, we’ll have to make do with cameras that allow you to use new sensors that are selected by the camera manufacturers. This isn’t the first time it’s been possible to upgrade a camera sensor (I’m thinking RED) but since the sensor is built into a removable head block in the URSA, it should be much easier.

Changing a camera sensor is only worth it if the rest of the camera is worth substantially more than a new camera with a new sensor would cost. This almost becomes a self-selecting argument (a bit like the soft-anthropic principle, with apologies for bringing a cosmological argument into an article about a camera). What I mean by that is that if you make the rest of a camera cheap relative to the cost of a new sensor, then you don’t really need modularity: you just buy a new camera. But if the rest of the camera’s expensive (and it is hopefully so for good reasons) then it certainly does make sense to have an easily changeable sensor.

We’ll have to wait and see how the camera performs in the hands of users and we won’t speculate here, but it’s what is in the rest of the camera that really makes this new model a thing to behold, because it’s more like a complete post production workflow on a tripod.

Remember that Blackmagic has recently embarked on a mission to place some of its products within other products, and this camera is the most intense embodiment so far of that philosophy. Blackmagic’s ATEM camera control system now contains the primary colour corrector from Resolve, allowing real-time grading.

And the three screens (one of which is the largest “viewfinder” you’ll find on any camera) lend themselves to displaying information about what’s coming into the camera, as well as what the camera’s doing to the video. So you can probably expect a lot of production workflow capabilities to be built right into the heart of the camera.

And then there are the recorders. Two of them. One records direct to ProRes, for material you can use straight out of the camera, and the other records losslessly compressed Cinema DNG raw. You can use them simultaneously to get the best of both worlds: instantly usable footage for preview and immediate broadcast use, and the flexibility of 12 stops of dynamic range for intensive post processing and grading.

The screens are perfect for displaying real-time waveforms and scopes (undoubtedly re-using code from Blackmagic’s stand-alone products) and the viewfinder is huge - an enormous boon for accurate focus and for when you need to put the camera up high to get a good shot above the crowds: just angle the screen downwards and you can see as if you were standing right next to it.

Finally, there’s a major part of this camera that’s intriguing me. It’s the processing power. To process video in real time, you need software that runs at “hardware speed”. What does “hardware speed” mean? It means that your software processing is as fast as hardware would be if it was doing the same job. The chips that allow us to do this are called FPGAs (Field Programmable Gate Arrays) and they are essentially hardware processors that behave like a box of lego blocks. Lego would be nothing without someone following a plan and building a tank, or an aircraft or a skyscraper. But with the right instructions (or “program) you can make almost anything. It’s the same with FPGAs. They’re made of amazingly fast logic units that arrange themselves according to instructions that they load up at boot time. These instructions might tell the FPGA to behave like a colour grader, a waveform analyser, or a ProRes encoder.

What’s exciting is that Grant Petty, CEO of Blackmagic, told me when the URSA was first announced that there was significant unused FPGA capacity in the URSA, which means that it will probably gain additional powers in future upgrades.

Keeping the price down

So, that’s why I’m excited about the concept of this camera. We won’t know how it works out in practice until we get one, which we hope won’t be very long. As ever, it’s fascinating to see how Blackmagic can push technological boundaries at the same time as keeping the price down. The Melbourne, Australia-based company is famous for taking established product types and reworking them to be cheaper but still fully functional. The company is in an area now where the competition is very strong, and it’s encroaching on that very high-end, rarified market where you could almost say that the price doesn’t matter. (If you’re shooting the next James Bond, the cost of your cameras is not going to be in the frontline of the discussion about budgets). In which case, everything depends on performance and usability. We’ll have to wait to see how well URSA does on both these counts.

But there’s another area, which is where I suspect the camera is really aimed. It’s a no-compromise device that’s very functional, that is happy to sit at the centre of a complex workflow. No compromise? Well, perhaps not. For some it may be too big, perhaps too heavy. And there will be a dozen other things that people can and undoubtedly will criticise. What I mean by “no compromise” is that this time, Blackmagic hasn’t left off features to keep the cost down. In fact, they’ve added them.

And what they've made is a full-sized camera that has every chance of shooting superb pictures, and which - importantly - looks the business. Even - or especially - to some smaller production companies, the fact that this looks like a "proper" professional camera might encourage them to buy it. Whatever anyone else says - for some clients, it's important that your camera kit looks impressive. This is harder to achieve if your camcorder can fit in your pocket.

For production companies that do have budgetary constraints, the big question is: should you buy an URSA, or should you forgo some of the ergonomics and workflow functionality and buy, say, a Blackmagic Production camera?

If it were for long-term professional use, assuming the pictures check out, then I would definitely consider an URSA.

Click here to see the first footage from the Blackmagic URSA