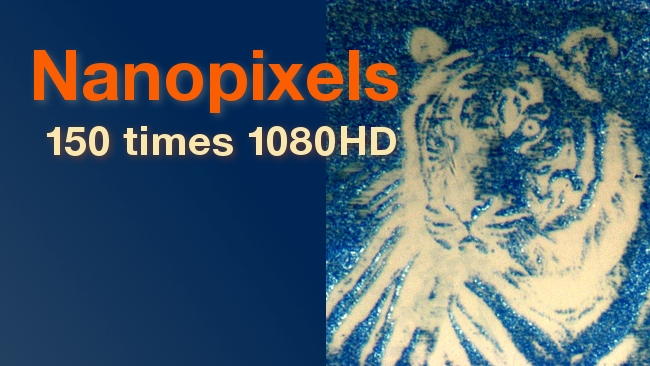 While many of us are just beginning to deal with 4K acquisition and delivery, a U.K. research team has revealed a glimpse of our high resolution future.

Step aside, pixels, and make way for nanopixels!

Okay, the change-over from pixels to nanopixels may take ten or twenty years (if it ever happens), but that shouldn't stop us from getting excited about the possibilities of this emerging technology.

A U.K. research team, comprised of scientists and researchers at the University of Exeter, as well as Harish Bhaskaran of Oxford University's Department of Materials, has developed a process that could potentially yield resolution 150 times that of the typical 1920 X 1080 pixel displays of today.

How small is nano?

The technology, which is years away from commercial applications, has the capacity to display lines just 300 nanometers in width. For comparison, a single strand of human hair is between 80,000 to 100,000 nanometers wide. Of course, to display such fine lines, the materials must be even smaller. According to TV Technology, the current process involves coating the phase-change material Germanium-Antimony-Tellurium (GST) 7 nanometers thick "between two element of a transparent electrode [so] they could use an electrical current to draw images on the semiconductor material," then creating images using an atomic force microscopy tip. For further comparison, a single strand of human DNA is 2.5 nanometers wide, or just over a third the width of the GST coating.

It's easy to scoff at scientific breakthroughs such as the nanopixel display, since such advancements often take decades to impact our lives in noticeable ways. But, when taken as a possible key component in next generation devices, such as virtual reality systems, smart glasses, and even holographic displays, the invention of the nanopixel display may ignite a development firestorm, which could result in the technology advancing rapidly. Who knows -  the fourth or fifth iteration of the Oculus Rift VR headset could be dependent on nanopixels, as the benefits of mega-high resolution increases the closer the viewer is to the display. The nanopixel system only refreshes pixels that change, so the respective display would also enjoy very low energy consumption, making it ideal for portable close-view devices.

Again, this nanopixel tech is a long ways off, so take a breath. There's no need to toss your current HD or 4K display just yet.