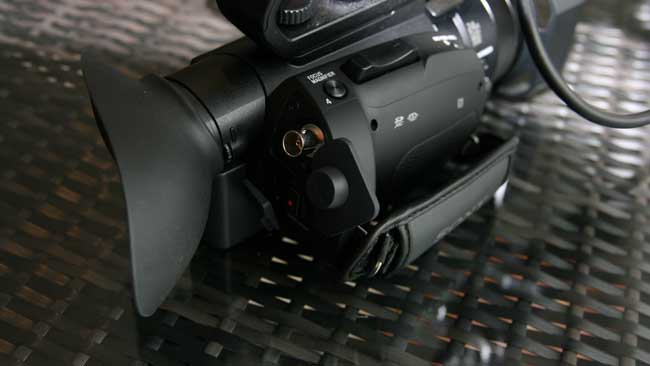 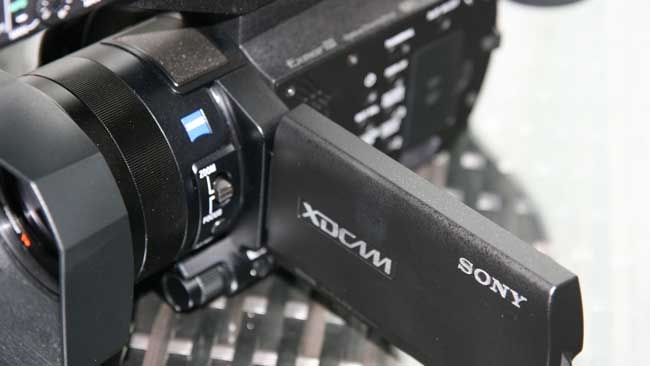 The world contains a lot of small, handheld camcorders. They're often especially small and hand-holdable now we're beyond the point of including a tape mechanism and the only moving part is often in the lens. Sony's new PMW-X70, therefore, enters a crowded field, and needs some genuinely interesting specifications to distinguish itself.

Perhaps the most arresting development in the X70 is the sensor – the same one-inch chip as has already been deployed in the FDR-AX100 and in at least one of Sony's compact stills cameras. This technological convergence is no great surprise, although this is the first time we've seen  the sensor married to a 4:2:2 10-bit recording system, which should be as able as anything to demonstrate the successes – and failures, if any – of the imager. The camera has other interesting design features, but before we go into its ergonomic layout or any further numbers, I should point out early on that this article is an analysis of the specification, not a review. I'm reliant on a few minutes' handling of the camera, as well as the test material Sony showed on Monday 28th July at the John Barry Theatre at Pinewood Studios, the complex west of London that's currently hosting production on, among other things, the next Star Wars. The documentary-style material shown did not appear to have been shot in circumstances which would have allowed any kind of problem-obscuring trickery to have been employed, and had been blown up rather unfairly onto an enormous cinema screen, so it's probably a reasonable, if not actually quite trying, test case. 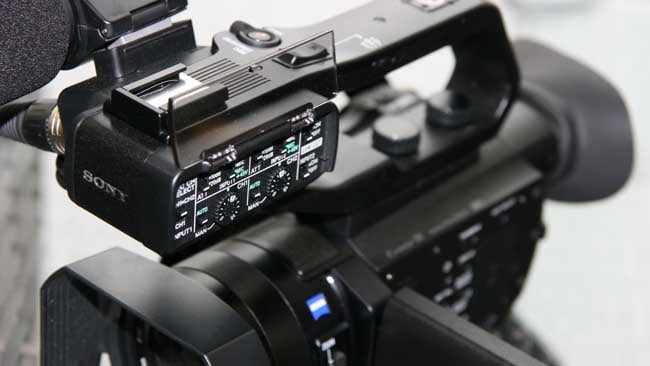 That big sensor gives us, potentially, several things. Photosites on a big chip are bigger, and thus more sensitive and lower in noise, than those on a smaller chip for the same resolution (or, perhaps, the bigger chip can have higher resolution without suffering the problems of small photosites). Depth of field is reduced for a given f-stop, and wide angle is easier to achieve. The X70's sensor does boast a fairly considerable 20-megapixel resolution, which is enough that it can't really claim to have big photosites in the same way that the 12-megapixel A7S stills camera enjoys given its full-frame 35mm sensor. What the X70 does have, however, is lots and lots of excess resolution. This is used in several ways, perhaps most prominently to allow for oversampling of the HD output image. As we discussed recently, oversampling is very nice. It reduces noise and increases sharpness on single-chip cameras, and both characteristics look very good on the X70. The demonstration included a 200% still-frame blowup – I'd have liked to see it move – of the HD output which looked very acceptable, perhaps because of the low noise and high level of natural detail in the frame, without reliance on the edge-enhanced artificial sharpening of other technical approaches.

Other cameras in this class typically have third- or quarter-inch sensors, which can't really compete in terms of sheer resolving power, at least not without terrible compromises to noise and sensitivity. The camera's stabilisation feature, for instance, takes advantage of the large sensor to provide room to shift the image around without compromising output resolution (though this sort of digital stabilisation will have issues with motion blur, especially if subject to really extreme vibration). Sony have also used the extra information to provide what they're referring to as clear-image zoom – effectively, digital enlargement of the image, but using the excess resolution of the sensor to ensure that apparent output resolution doesn't fall off as it typically does with digital zoom. This is reasonably effective, taking the total zoom range on the camera to 24x, although at the very longest end of clear-image zoom the dispersion in the lens becomes slightly more apparent than it is when the feature is not in use, revealing the trick to a cautious eye. 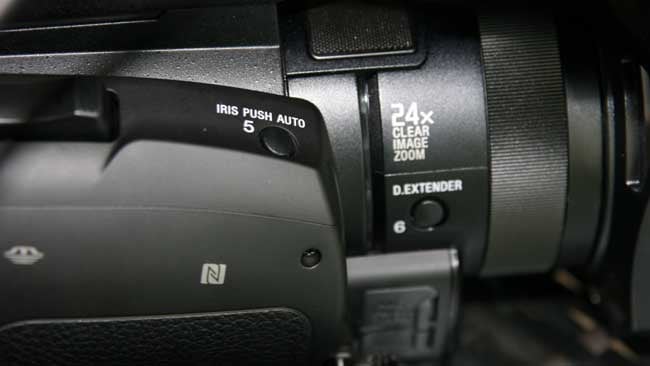 The other sensor-facilitated feature of this camera – which I fear will be widely overlooked – is that the wide end is genuinely wide, like a good wide zoom on a 2/3” 3-chip camera. Full-time ENG cameramen spend a lot of money to get lenses in the low single digits of focal length and the X70 does quite a good job of providing a similar field of view. Clear-image zoom (and a conventional digital zoom, for desperate moments) can in any case be selectively enabled and disabled. These are both nice features, but there's wider learning from this as well: it is now easier to make a high resolution sensor than it is to make a high resolution zoom lens, even if that lens is the typical servoactuated variable prime with automated focus tracking. The downside of the lens, as with any such camera, is that it is servo-coupled, and no better than any other servo-coupled lens. The single control ring is switchable between zoom and focus control, and is infinitely-rotating. These characteristics are not great in HD, and will doubtless be even more of a bind in 4K (of which more below). Sadly, not much else can be done at this price point, and it's more or less the same as any other camera of its class.

An ability that one might have expected from a camera with low intrinsic noise is somewhat nicer highlight handling than was shown, or at least that ability as an option. The test footage was shot in the standard setup. This is a slight shame as it seems – based on the footage shown – to suffer the same rather harsh luma handling as a lot of other cameras (such as Canon's DSLRs in “standard” profile) which tend to clip whites hard and leaves one wondering what the highlight response of the camera really is. Sony seem eager to promote the camera for wedding videography, but anyone looking to produce a pleasant rendering of a bride's white gown in sunlight will need to carefully investigate options other than the default. Other options certainly exist and do, based on a thirty-second scroll through, appear to behave roughly as required in this regard, but it wasn't demonstrated. According to the company the X70 cameras used in the demonstration arrived less than 48 hours before the press event, so the situation is more than forgivable and I would like to shoot some simple tests with the other modes. Given the noise-attenuation intrinsic to oversampling, one would technically expect it to have very decent highlight handling, but we'll see. 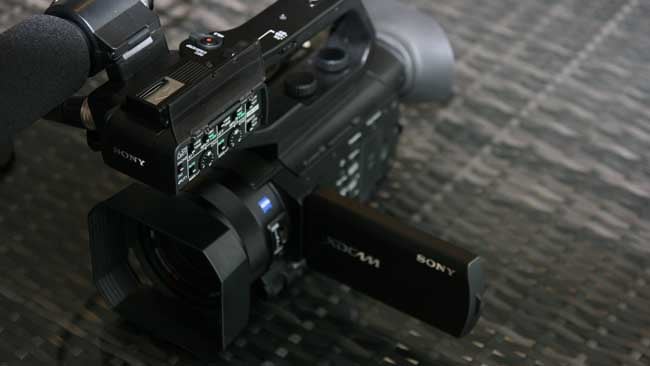 The final benefit of the X70's sensor provision is that Sony are already talking about a 4K firmware upgrade. This concept suffers the same potential caveats as things like the 4K upgrade to the FS700, in that an HD camera made really good by oversampling might well become a fairly average 4K camera when that oversampling isn't available. Also, the X70's built-in lens visibly starts to run out of MTF at the long end of what's currently clear-image zoom, but what in 4K might be normal imaging. The pixel density of the sensor – one inch and 20 megapixels – compares reasonably to that of the four-thirds-inch and 16-megapixel GH4, however, and the GH4 is a respectable 4K camera. Hopes are therefore raised that the X70 might turn out to be a decent enough 4K performer, although naturally without the low noise, clear-image zoom and other oversampling-dependent features available. It's also important to mention that rolling shutter is really exceptionally well-controlled, practically invisible on even quite violent whip pans across vertically striped wallpaper. One assumes it will still flash-band, but images are otherwise amazingly wobble-free.

Other things separate the X70 from the AX100, and not just the fact that the X70 doesn't emit a cheery tri-tone bleep when turned on. At 1.4KG, the X70 is nearly twice the weight, and although Sony seem keen to promote it as a lightweight, I'd prefer to call it a reassuring lump of technology that's chunky in a good way. The very lightest cameras are often lightly built and suffer terrible instability when handheld. Adding to the impression of solidity is the fact that there is an SDI output on a proper, full-size BNC connector, and what's more, that connector appears, by the presence of two screw heads framing it on the back of the camera, to be attached to the alloy chassis, as opposed to dangling precariously from the PCB inside. Now is the moment to adjourn to your music service of choice and cue up the hallelujah chorus, for this is genuinely lovely to see on a lower-cost camera. As to ergonomics, no experienced shoulder-mount camera operator has ever really enjoyed the handycam layout, but it's not a bad example of the breed. Switchery is kept to a minimum, with shutter speed, gain, and white balance in the places they should be, not obscured by the flip-out TFT, albeit as pushbuttons rather than the preferable toggle switches. The viewfinder, although a nice little OLED, really is quite little and most people will operate off the TFT except in the most backlight-overwhelming sunshine. 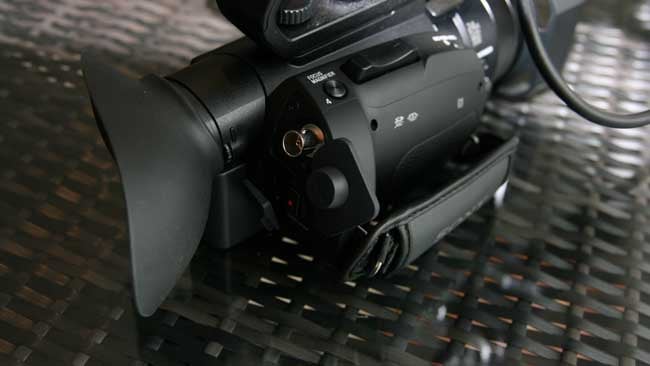 A brief word about audio – the X70 uses the same hot-shoe format, which Sony call Mi Shoe, as the A7S, and thus accessories are cross-compatible inasmuch as they'll physically fit. The default top handle for the X70 (which wouldn't usefully fit a stills camera) includes an XLR audio provision very similar to that we saw with accessory included with the review 7S. This means the audio provision is good, and simply by removing it the X70 can go undercover in the garb of a tourist's handycam. Other accessories, such as a radio mic receiver, can also receive power and supply signal via the hot shoe without external cabling. We can cover the recording options equally quickly – full XAVC is supported on sufficiently fast SD cards, of which two are supported, with various recording options to lay down footage of interest on one card while isolating the camera's entire output to another, producing duplicate cards, or other modes. More bitrate is good, less subsampling is good, and more bit depth is good. Enough said. 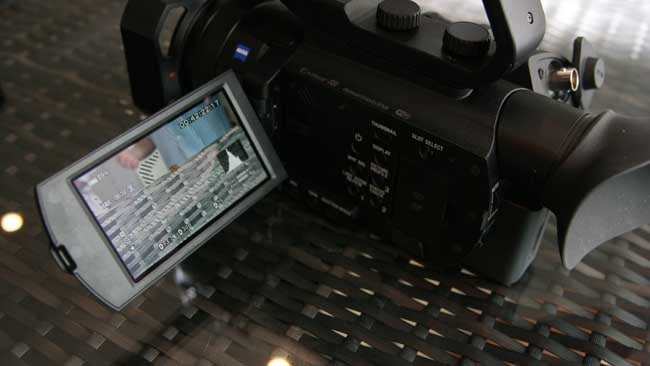 The X70, then, appears at first glance to be a good small ENG, documentary or wedding videographer's camera, which puts it in a very crowded market. It is distinguished within that market not only by the large sensor but by the sensible feature decisions which make good use of the excess resolution. The lens is – as ever in this field – a restricting factor although the wide end is nice. SDI out is a welcome practicality, and in extremis provokes thoughts of shooting movies and recording the results to ProRes. Could one really shoot a competent theatrically-released feature film on this thing? Of course one could; the lens would drive the focus puller absolutely blind, but the pictures are sharp enough (and possibly can look better highlight-wise than the demonstrations we’ve seen so far). The final analysis is, therefore, whether the PMW-X70 is a useful addition to existing product lines from both Sony and their competitors. On current information – which as we've said is incomplete – it's hard to argue that it's anything other than very useful indeed.