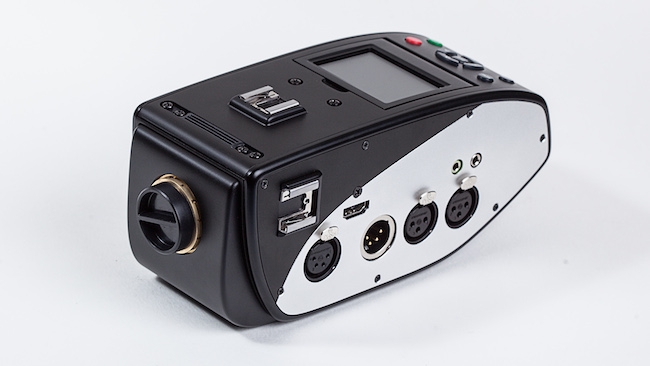 A colour shot of a monochrome camera

According to the Digital Bolex User Facebook group the first monochrome model of the D16 raw digital cinema camera, dubbed the D16M, was recently delivered.

The D16M (yes, the "M" is for "Monochrome") made its first appearance at NAB in 2014 and is the latest in an interesting trend of dedicated black and white digital cinema cameras. Much larger companies such as Arri and Red, as well as boutique companies such as Ikonoskop, all have monochrome versions of their popular cameras.

Aside from monochrome sensor (a "Kodak native monochrome sensor," which we assume falls under the same TrueSense branding as the colour chips) and the lack of an OLPF filter, the camera will retain the same resolutions (2K, HD and 720p), ISO settings and dynamic range as the original D16.

The D16M will retail for $3,999.99, while a full colour D16 with the same 500GB internal drive is available for $3,599.99. This might seem unusual for camera folk who are used to paying less for black and white film and processing than colour., but the increased cost of the monochrome camera is connected to a slightly higher cost of unit production.

"...when we order colour sensors we can do it in bulk (at least bulk for us); when we order the B&W sensors we will be purchasing essentially one at a time,” CEO Joe Rubinstein commented on the Digital Bolex website.

Effectively, this means that each D16M is essentially a customised order. With smaller number of black and white sensors being purchased from TrueSense, the cost of each chip is closer to standard retail price than the bulk order of the colour sensors. This combined with the infrastructure and labor cost explains the four-hundred dollar difference.

Who Will Use It?

When a new camera hits the market, inevitably the question of 'who is going to buy and use this camera?' surfaces.

Black and white has been used for decades in film and still photography to promote an atmospheric quality that can be difficult to achieve in colour," states the DB team on their website. "True black and white is more faithful and dynamic to the subject than desaturated colour photography, rendering more natural and subtle shading and colour luminosity."

The D16M has an obvious connection with cinematic history. Think of all the classics — could you imagine the moodiness of Metropolis, M, or The Maltese Falcon without their black and white tones? Would the comedy of The Apartment, or Some Like It Hot or drama in On The Waterfront or Casablanca benefit from colour? Maybe, but not likely.

Black and white cinema has been making a come back at the theaters, with movies such as Ed Wood, The Good German, Good Night and Good Luck, Sin City, Computer Chess, the intense opening of Casio Royal, and the stop motion Frankenweenie hitting the big screen. A majority of these films had made the aesthetic decision to go black and white early on.

With the slowly fading existence of film, having natively monochromatic cameras will be a much welcomed tool to cinematographers who like to craft the images on set and not in the editing room.

Indeed, according to Digital Bolex, they were asked by a number of educators and filmmakers to create a monochrome version of the camera.

"Many educators prefer to teach in black and white so that students learn to shoot with proper exposure and composition rather than focus on getting a colour balance just right. We’ve spoken to dozens of film professors and school teachers over the past year about their needs in a cinema camera beyond a simple “black and white mode” on teaching cameras. With 16mm film stock it was easy to give students Tri-X, now educators have to use less than stellar black and white capture modes from modern video cameras. We hope our camera will give professors the option of shooting on native black and white cameras."

Retailing for $3,999.99, the D16M can be ordered as a new camera, or a paid "upgrade" to an already existing camera order.
To read Digital Bolex's full press release, click here.