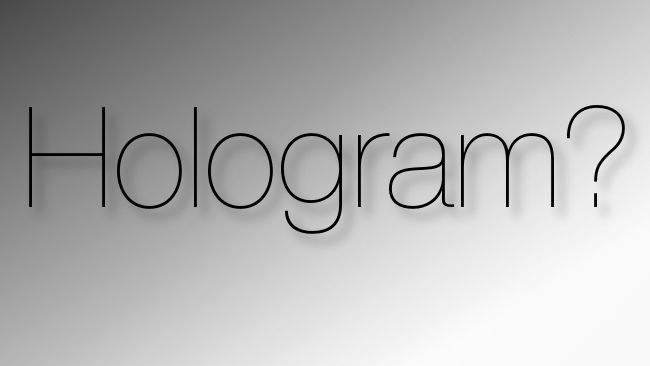 Our resident Technical Editor Phil Rhodes explores the current state of 'holography.' Spoiler: we've got a long way to go before we can project a truly holographic Princess Leia.

As we've explored before, current techniques for stereoscopic cinema are significantly less than perfect. I don't mean to unduly stick the knife in here, but there are a lot of unsolved problems even if we overlook the dorky glasses. That's relatively easy to fix. What's harder to fix are things like the inherent disparity between focus distance and convergence distance, the variation in real-world divergence as screen sizes alter, and the need for the audience to keep their heads level in order to avoid a vertical convergence problem that's almost immediately painful.

What we want, really, is a full on, free-space 3D display in the mould of the hovering image of Princess Leia that R2D2 projects at the beginning of Star Wars. I avoid the term 'hologram' here because there's nothing about this desire that has much to do with holography in the technical sense, at least as it exists at the moment. Traditionally, holograms involve the storage of image information as interference patterns, although a sufficiently broad definition could also encompass things like reflections in the circular smears on a freshly-polished car roof, which can appear to be beyond the surface of the roof because of their anisotropy (their differing appearance when viewed from slightly different angles).

Out of thin air

Actually creating hovering, glowing pseudo-objects is a difficult problem principally because it's hard to make light leave an emitter and then form a visible spot in mid-air without there being something at that mid-air spot for it to be diffused by. Some laser projection techniques which can create 3D designs in nominally empty space require smoke, and many of the things widely referred to as 3D holograms – the techniques used to resurrect dead celebrities for on-stage performances, for instance – are really just artfully-arranged projections or reflections and, despite being effective pieces of visual trickery, are neither 3D nor holographic.

The techniques for doing this sort of thing are old. The original Pepper's Ghost effect, pioneered in the 1860s by John Henry Pepper and his associate Henry Dircks, simply requires an angled piece of glass, reflecting an object out of the audience's view. The trick has been used to create convincing ghosts for live and screen presentations ever since, and it's the same fundamental physics as a teleprompter on a TV camera or the heads-up display in a military aircraft. The downside of this approach is that it requires a large semi-reflective surface (often glass or a stretched flexible film), usually at 45 degrees to the audience, and a display panel placed either above or below. For minimum obtrusiveness, this reflector often occupies the entire height and width of the performance area. The associated video display must also be large enough to encompass the required performance area, which often means that the only practical technology is projection. Because the reflector will only reflect a proportion of the light, the display must be powerful – powerful enough that the reflection matches the apparent brightness of real-world objects.

Pepper's Ghost is cumbersome, and it's perhaps not surprising that alternatives have been derived, based on the relative ease and convenience of current projection equipment. Operating as a straightforward back projection configuration, the cleverness of this approach is in the screen material, which must diffuse the projection beam sufficiently to make the image visible, but not offer so much diffusion that it becomes visible under any other light that's falling on the stage area.

These techniques, which have both been called 3D holograms when they aren't either 3D or holographic, are nonetheless useful and attractive presentation tricks. Trade show attendees will have seen the little desktop presentations which use, in effect, several Pepper-style reflectors in a pyramidal formation, with four-point imagery appropriately positioned on a single TFT or plasma display. The key, as ever, is in the quality of the content, and the effect can be attractive and compelling. Given that the stereoscopic convergence point is at the combined distance from the observer to the reflector and from the reflector to the display, the image appears to float convincingly within the glass pyramid, and the effect in fact works best at relatively small scales where convergence-derived stereoscopy is in maximum effect.

But there are limits. Both these techniques are sensitive to viewer positioning; since it's not really a 3D image, there's no way of looking at things from any angle other than straight on, and the trick only operates from a reasonably small range of angles, with apparent positioning errors and straightforward perspective compression both potential problems depending on the technique in use. Both place limits on the sort of lighting and staging that can be used.

A real animated holographic display should be able to solve at least some of these problems. Electronics company Ostendo, an opto-electronics startup that's involved in solid-state lighting, is developing an innovative display which has recently, if cryptically, been described in the Wall Street Journal. The only public photo of an operating device appears to show a tiny, fairly low-resolution display, although I notice that the content, which looks like a striped cone, is being kept carefully within the bounds of that display. 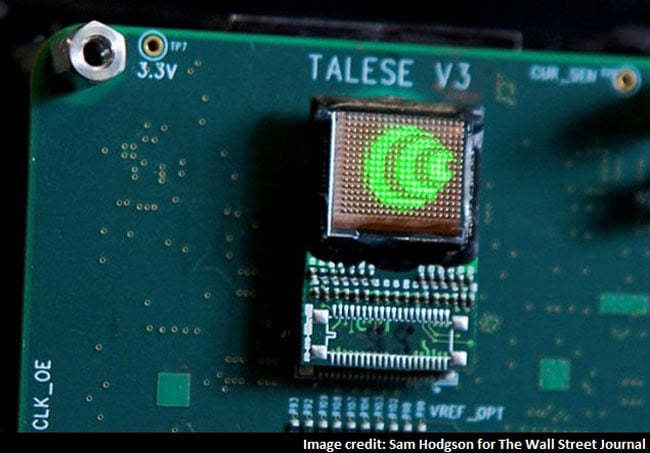 On this basis – and this is a bit of photographic intelligence interpretation which may be wildly inaccurate – I suspect that what's being done here is a vast expansion of the glasses-free stereoscopic displays that are being tried here and there. Those displays have the ability to display two different images depending on the horizontal angle of view, such that each of a human being's two eyes sees something different. Expand that to work in both axes, and increase the image count from two to a number sufficient to provide the illusion of free viewability of a solid object from any angle, and you have an effective pseudo-3D display, albeit one that will clip the object to its own edges depending on the angle of view.

The technical approach applied to achieve this are unlike those being used to produce at least some glasses-free stereo monitors, but it isn't very clear exactly what is being done and no technical information has been released. It looks – and again this is interpretive – as if each pixel is a multi-angle LED cluster, which would require a large number of emitters per pixel and may explain the company's high dots-per-inch claims, if they count each pixel as more than one dot. If this is right, it'll give you what looks a bit like a 3D projective display from above, but what it won't give you is the longed-for hovering free-space hologram as used to inform Obi-Wan Kenobi that he was somebody's last hope. And I still don't think it's strictly a hologram, any more than a Pepper's Ghost.

So, the technology is coming, sort of, so long as you don't want beautiful glowing free space objects made of nothing but light. Until then, we'll have to content ourselves with reflections floating inside a well-polished car, because the solution for real, true 3D cinematography is still far out of reach.