Are your eyes good enough for HD, let alone 4K? 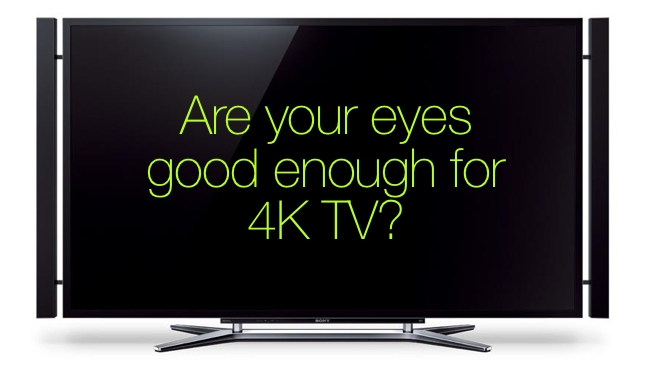 Are your eyes good enough for 4K TV?

If you're unimpressed with 4K, perhaps you should get your eyes tested!

Let me bore you with the TV history of the Payne household. We’ll skip anything 4:3 as this is the TV equivalent of dinosaurs.

Let’s start with that lovely silver 28 inch Sony Trinitron CRT – which had a stunning 16:9 SD image with great contrast. My wife actually cried when this TV arrived, not with joy at the wonderful bright colours it produced, but because it was as deep as it was wide, so it jutted out into the room like a dirty iceberg, and the box it came in was the size of a Fiat!  Even my mother-in-law eventually decided this was too big for her house, and I sadly carted it off to the civic amenity centre only a couple of months ago, where it will probably get recycled as an electricity sub-station.

Next we went flat screen with Panasonic 37 inch plasma, which at that time was the perfect compromise.  Firstly a compromise with my wife who did not want the new TV to be bigger than the bookcase, and secondly a compromise for me, because at the time most broadcasts were in SD, and SD looked horrendous on that generation of mainly LCD screens. The 1024 X 720 resolution was acceptable for both SD and the wonderful brand new BBC HD Channel that we could get on FreeSat (A free-to-air satellite service available in the UK and surrounding areas).

A couple of years ago we finally decided that we needed full HD at home. Negotiations allowed for expansion to 42 inches, on the understanding that the bookcase was also enlarged, and of course by this time many more programes were being broadcast in full HD. I wanted proper 1920 X 1080 resolution and not being happy with the motion or contrast on any LCD or LED I’d laid eyes on by then, I settled on a wonderful Panasonic GT50 Plasma screen which shows the best blacks I have ever seen, and has enough other goodies to keep the increasingly multi-media aware 5 and 10 year critics in the house happy. I sat back on the sofa – 3 metres away, preparing to be as impressed as I was in the shop - but something wasn’t quite right.  I tweaked gamma curve and turned off scaling, I tried both the built in FreeSat and FreeView HD, and eventually (like most men in their 40’s) I started to live with my vague feelings of disappointment; well, specifically about how the native HD didn’t look much better to me than the old 1024 X 720 37 inch screen that had been banished to the spare room.

One evening, after a little too much wine, while watching Alien, I decided to get the true cinema effect by sitting on a bean bag closer to the screen, rustling a crisp packet and not going to the toilet even when I wanted too.  Wow! The screen looked fantastic!  All that extra detail!  It was a revelation. Turns out one of my eyes was low resolution, not the television. The offending eyeball, which for 46 years had been 20:20, had finally given up going to the eye gym and had lost half a dioptre, and that was enough to soften 1080 lines of resolution to 720 at a distance of 3 metres from the TV to the couch.  I could, of course, have opted to wear an eye-patch and ignore the fact I like the occasional thing in 3D, but decided instead to go to the opticians.  A few days later when the glasses arrived all that lovely extra detail was visible even from the couch.

Not a totally happy ending I’m afraid, I now realise that I should have gone for proper ‘glass’ lenses in my spectacles rather than ‘plastic’, because when I have my glasses on it feels like I’m looking through well-polished Tupperware, but next time I feel like my eyesight is going softer I’ll get that sorted, probably at the same time I’ll be looking at a lovely new 55 inch 4K screen, and choosing a new book case, and realising my arms are getting too short to read small print.

Get Your Eyes Tested Folks!