Gaming in 8K is here. But it's very slow! 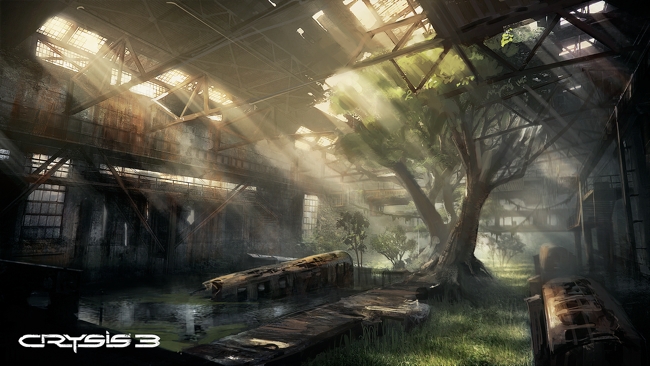 It's just an experiment or hack, but it is real. A computer game running (albeit very slowly) in glorious 8K

If you're into video games, you'll understand what Crysis is. If not, and who can blame you, be aware that in 2007 a developer called Crytek released Crysis as the followup (if not quite sequel) to its well-received hit Far Cry – you'll notice the naming convention. Both games feature tropical environments which were, for the time, and especially with respect to Crysis, rendered with lavish detail and enormous graphical sophistication. Even now, Crysis, with the detail settings set to maximum, is considered a stern test of computer hardware. It probably represents games on PCs, as opposed to consoles like Playstation and Xbox, at their zenith, if only because the huge manual labour involved in defining a 3D-modelled environment at that level of detail makes it difficult for developers to do more.

Given the number-chasing tendencies of the modern world, it's perhaps not that surprising that someone has now made a PC render Crysis at 8K. Doing this required a few internal changes as it isn't something that software, graphics cards or monitors are widely expected to be able to do now, let alone in 2007. The usefulness of it is limited to technical interest as current computer hardware, which might happily render the game at 1080p30, struggles to finish a couple of frames per second when the image contains 16 times the number of pixels.

While that mathematically makes sense – one-sixteenth the frame rate for sixteen times the pixels – and the images are of course bursting with sharpness and detail, there is naturally a question of usefulness. With 4K moving into the mainstream and the utility of going further widely questioned, it's hardly controversial to say that it isn't very useful to render video games with 16 times the currently-accepted pixel count – at least if you consider it in the context of current viewing practises, with the observer sitting in front of a monitor. Even with an 8K display, the ability of most humans to see the difference becomes limited, even at the much closer viewing distances typical of computer displays, and that's before we've even considered the effect of simulated motion blur on perceivable sharpness.

There are, however, situations where the extra pixels might be useful. One particularly good example might be VR headsets, with Oculus Rift being much in the news. The earliest versions used only a 720p display, with that display responsible for filling not just the borders of a monitor on a desk, but for filling the entire human visual field twice, for stereo 3D, within the ability of the human eye to articulate in its socket. This was widely held to be inadequate – in fact, it seems likely that the imminent 1080p version will also be somewhat inadequate in that way, given the huge field of view to cover – and if there's an immediate use for 8K rendering, that might be it. We wait, sadly, for an 8K head-mountable display, and for PCs that can render 8K at more than two frames per second.

More immediate uses for excessive resolution include antialiasing. Notice that 1080p downconversions of the 8K Crysis frames look completely sharp but simultaneousy very smooth and free of aliasing, a result of being four times oversampled in each direction. Clever algorithms can perform fragment antialiasing, by attempting to detect the edges of objects and concentrating expensive oversampling in those problem locations, but it's never been quite as effective as the brute force approach.

In the main, though, I suspect that when we do have the horsepower to render that much information at a usable speed, it won't necessarily be used for 8K resolution, it'll be used for the things we traditionally desire in video games. Mainly, this means drawing more detail, and drawing it to greater distances, at higher frame rates, and with motion blur, high dynamic range, wide colour gamut, and high resolution textures (Crysis's famously huge textures hold up surprisingly well at 8K). As we saw with the labour-intensive jungles of Crysis, designing for these capabilities may require a lot of development of procedural content generation, to adequately fill such a high-resolution world with an interesting environment. We might expect that this will become a big deal in the near future, even if only to allow developers to rough-out an environment to be finalised by hand.

Crysis itself has been a benchmark for years, though, with larger and larger monitors making greater demands on the PCs that drive them; seeing it break new ground is like watching the return of an old familiar friend.