Apple lays out its software future 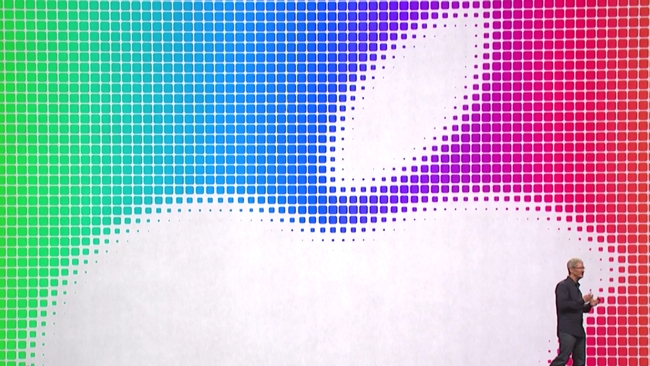 Instead of a MacBook Air (Retina) as a final reveal, the closest Apple CEO Tim Cook got to a ‘just one more thing’ was a new programming language and a man coding a casual game, in real-time, on stage.

Five days before WWDC opened, Eddy Cue proclaimed Apple’s 2014 line-up as the strongest he’d seen in his 25 years at Apple.

That was a tease unfulfilled at WWDC.

When the new hardware is finally (finally!) unveiled, a considerable amount of what makes the Apple price tag acceptable was fully on show at the Moscone Centre.

For Apple’s competitors, call this an exercise in foreshadowing.

No new super-size iPhone… but HomeKit offers the prospect of an iOS interconnected home. Say ‘good night Siri’ and the home security is activated, the lights dim, the garage door locks and the thermostat goes down.

No iPad Pro… but (finally!) an Extensibility API designed to enable third-party apps to share content without relying upon Dropbox.

No iWatch, but HealthKit API to provide a central, secure repository for health related information and the ability to share with your doctor. Support from the Mayo Clinic a host of other American medical institutions.

No new Mac… but a slick new iOS7 influenced look and a Continuity feature that makes the benefits of owning a Mac radically enhanced for iOS owners.

Tim Cook called iOS 8 the most significant release since the App Store itself. And just like the App Store, it’s all about the potential.

WWDC2013 was the iOS7 show with Jony Ive’s thorough overhaul of iOS to expunge every last element of skeumorphism in favour of a (mostly) elegant minimalism.

It was to be expected OS X would be brought into line, but now that iOS 7 has settled in with a 97% approval rating there’s little controversial (or overly exciting) about seeing the same UI look and feel on Mac.

A tasteful set of new icons and plentiful use of translucency effects look pleasing enough, with subtle interplay between your wallpaper and folder colours - there’s even a ‘dark mode’ - but it no longer has the shock of the new.

Surprisingly, what was most exciting about OS X Yosemite wasn’t so much what it enabled the Mac to do itself as a host of features that made the iOS/OS X integration so much more powerful.

Say you’re working on a Numbers spreadsheet on your iPad, then get up off the sofa and walk to your Mac. There’s a prompt on the Mac to immediately continue working on that same spreadsheet - simply click on the icon and go. No need to launch the program, navigate to iCloud and locate the file you’re working on. It just works.

If your Mac isn’t on a network, bringing your iPhone into range offers a zero-hassle hotspot.

If your iPhone is charging in another part of the house and you’re at your Mac, no problem - you can make the call directly through the Mac. When in Safari on Mac, each phone number can now trigger a iPhone call through your Mac. Cue Dr Dre for that demo.

Keeping up with the Chromebooks

iCloud was envisaged by Steve Jobs as a magical feature auto-synching files between iOS and Mac OS in the background. That’s great for the computer phobic, but there’s still plenty of people who like to see their files and folders.

Cue, iCloud Drive - a fairly direct nod to Google Drive which offers access to files and folders in the cloud.

Another feature that should interest Google was a revamp of Mac OS X’s internal system search, Spotlight, to include web search. With each iteration Spotlight has slowly evolved into a more powerful tool, however it’s been rather hidden away in the top right corner.

In Yosemite, triggering Spotlight brings a large search box into the centre of the screen. For now, the underlying default web search engine is still Google,

Overall, Yosemite not only looks good but will score high in usability for iOS users in particular. It will be free and is due to ship in the Autumn, but a preview release will be available to the public soon.

iOS 8: all about the APIs

For end-users, there’s a host of refinements, such as interactive notifications so you can respond to a message within another app - and even directly from the lock screen which seemed an interesting security issue. The familiar double-click to bring up active apps, now also shows your most recent contacts which looks a great idea on iPhone in particular. Mail refines draft mode, simply swipe down to save a draft while you browse your mail.

QuickType offers predictive type suggestions - hardly new, but the demo stressed context - ‘do you want to go out’ leads to ‘dinner, movie’ text suggestions, plus personalisation. The more you use a word like ‘epic’, the more frequently it will suggest this.

Messaging is the most used iPhone app, so there’s plenty of thoughtful refinements particularly in group messaging, including tap to talk, so you can embed audio, video and images as you wish.

iPad Safari gets a bird’s eye view of open tabs, a welcome sign of some thought being given to the iPhone’s less lucrative iOS partner.

So plenty of refinement, but it’s hard to identify a blockbuster must have feature.

HealthKit was leaked fairly thoroughly ahead of time, so few surprises in the reveal which offers a common repository of health info which can be shared across apps, including Apple’s own Health app and one from Nike. The Mayo Clinic will help support analysis of medical data, including an alert to your doctor if your stats cause concern.

Metal is a less worthy, but more fun replacement for OpenGL with the promise of a 10X improvement in performance on Apple’s A7 chip. Aside from Epic Games, its introduction referenced Crytek, Unity and EA Games - with the latter referencing its Frostbyte game engine as being possible on iOS.

A sneak peek of a 3D Plants Vs Zombies was promising and raises interesting questions about what will be possible on A8. So far, it’s fair to say iOS gaming has generated plenty of innovation and lots of money, but very little to seriously rival anything on the home consoles. Metal is intriguing, but Apple may yet have to buy a developer or two (or simply Nintendo) to truly realise the potential of its platform.

There’s also a considerable overhaul of the App Store itself, with much improved navigation and, at last, support for App bundles. However, App previews aren’t as exciting as the name suggests - it’s a short video rather than a demo.

And finally, yes, that new programming language. Objective-C has served Apple for twenty years but has drawn criticism for lacking features seen in more modern languages. The on-stage demo showed code being compiled as it was typed, with a playground showing live changes to a simple 2D game.

Swift code can be mixed with Standard C and Objective-C in the same project, so obtaining speed increases by optimising the most important code in Swift should be possible. Already a free 860-page Swift Programming Language book is available now on the iBook Store.

Before WWDC, critics were pointing to the $3.2 billion purchase of Beats as the ultimate triumph of marketing and design over engineering at Apple. The commoditisation of technology and the overriding importance of fashion. WWDC14 was a blunt refutation of that argument with Tim Cook making a point at closing to pay thanks to the thousands of Apple employees working behind the scenes to deliver an overwhelming array of features.

Cook’s takeaway message was simple: Apple engineers platforms, devices and services to provide a seamless experience for users unparalleled in the industry and in sharp contrast to the “toxic hell stew of vulnerabilities” represented by Android.

We can’t yet say whether iOS 8 succeeds in fully retaining its security while enabling the flexibility of rival platforms. Let’s just hope we don’t have to wait for its release this Autumn before Apple’s much vaunted 2014 hardware line-up makes an appearance.