Panasonic's 4K GH4. All things considered, is this the best camera ever? 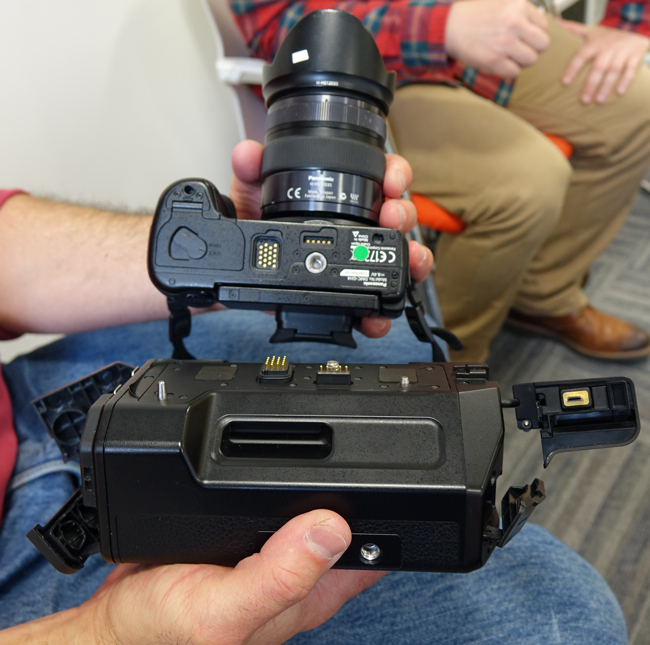 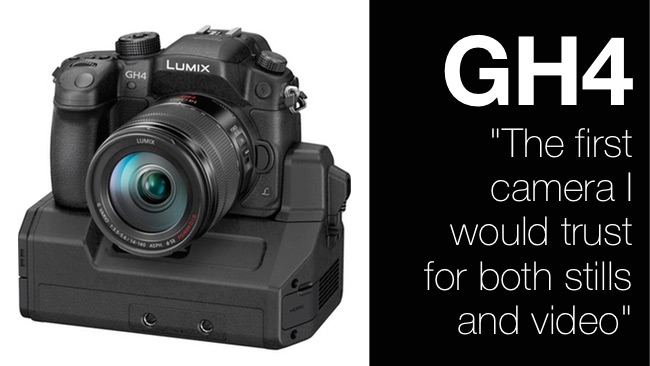 Panasonic's GH4 has exceeded all expectations. It's a 4K professional video camera in the guise of a still camera. It has stuff never before seen on a still imager. Here's our in-depth look at this stunning new camera

Since the arrival of the Canon 5D mark II, those of us trained on ‘proper’ cameras have always been happy to sneer at the DSLR: ‘nice depth of field, shame about the audio’ or ‘great colours, shame it’s out of focus’ and don’t start me on talking about aliasing and moiré. With the GH4, we’re going to have to come up with a new book of excuses. Frankly, if I had been given a new, purely video, camera with the same feature set I would have been more than impressed. The fact that it also takes up to 12 stills (which look better than my expensive DSLR) every second elevates the GH4 to a new place in my affections

So what makes it so ground breaking? It's not just the headline features of 4K recording and a 200 Mbit/s iFrame only HD recording at both 25 and 50p, it's the combination of this and a host of other tools lurking in the menus and the rather surprising optional extra called the YAGHE which can be firmly mounted to the bottom of the camera. I've decided to call it a ‘Yargie’ by the way. The YAGHE gives the camera not only balanced XLR inputs with phantom power, audio level controls and LED level meters, but also Quad 1.5G SDI Output, or 3G, both at 10 bit 4:2:2. They throw in a full size HDMI too which also outputs 10bit 4:2:2 simultaneously and a timecode input on BNC.

Let's look at the headline features in more detail. The GH4’s 4K recording is onto very fast SD cards (I've been using a SanDisk extreme pro 64 GB card which will cope with the 100 M/bs of the 4k modes as well as the 200 M/bs iFrame HD modes as well).

A weather sealed body protects the brand new 16MP sensor from the elements and I’ve yet to run one battery down when using the camera on a normal day.
The GH4 can shoot 4K and then output 8MP jpegs which you select from the video straight onto the SD card. It has a totally silent mode for shooting close ups of sleeping tigers or sneaky shots in a press conference. 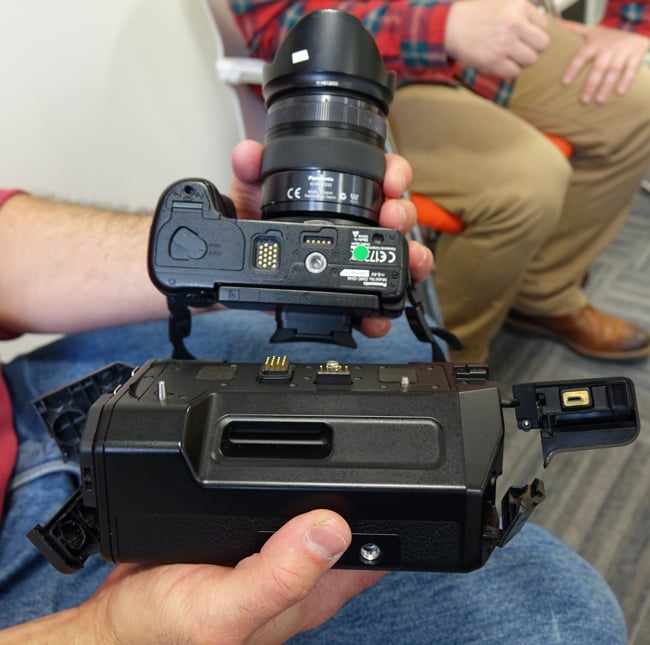 YAGHE base unit being attached to the GH4. There is also a side connecter. Attaching it is a bit fiddly, but once it's in place, it's very secure. 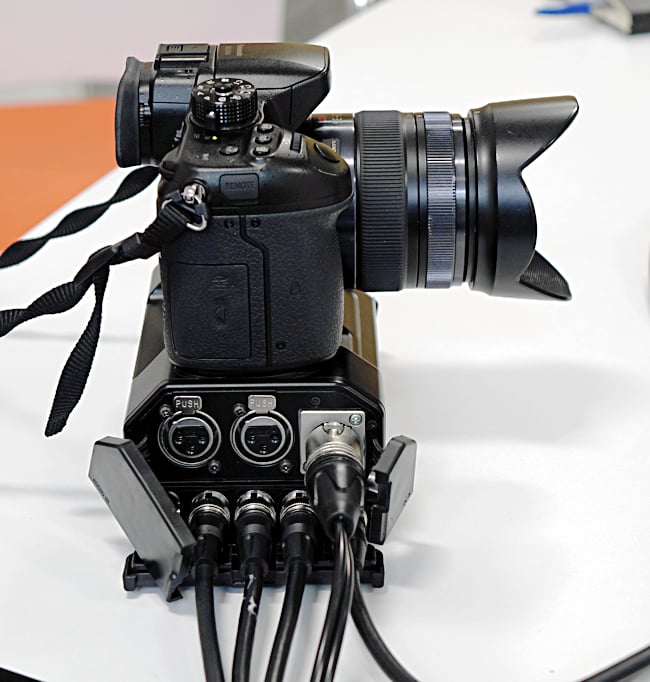 GH4 attached to the YAGHE base unit. You can see the Audio XLR sockets and the quad HD SDI outpu

The GH4 has an exceedingly fast and accurate new auto focus system called Depth from Defocus. With Lumix lenses the camera works out approximate distance by seeing how blurred the image is, then uses the more traditional contrast detection for the fine tuning. Continuous auto focus is available in video mode and a number of modes can be selected. This system is incredibly fast, a Bond like 0.07 seconds! Face and eye detection lets you select either eye of your main subject. Accurate tracking of a selected area is possible, a 49 point autofocus and a unique (to me anyway) free selection mode that allows a user to select which pattern of the 49 autofocus areas are used. Focus peaking and expanded focus on the OLED touch screen and viewfinder can confirm the autofocus accuracy or allow manual focus.

Because the internal SD card recording formats are 8 bit it's advisable to create the best look that you can in camera and the GH4 offers the tools to make this possible. Highlight and shadow curves can be selected and custom created, pedestal levels set, and both Panasonic's D and V film settings are available and fully customisable.
White balance even offers a dial in K mode which is useful for shooting under sodium lights or in other tricky situations. 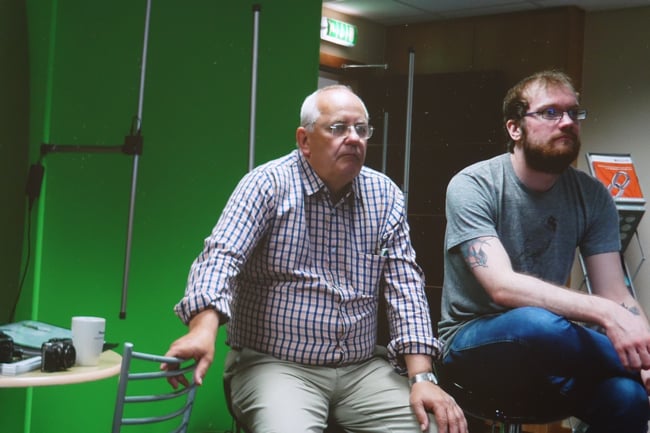 Photograph taken from the screen of a Dell 4K monitor, showing playback of GH4 4K ProRes, recorded on Blackmagic Hyperdeck Studio. Note the lack of banding on the green background

Expanded Focus, focus peaking and zebra zones may be normal to video camera users, but are a very welcome addition to monitoring on the GH4, but it's the quality of the 2,359,000 dot OLED viewfinder and 1,036,000 rear touch screen that will really impress here. The blacks are so black, just like my plasma at home. When I was shooting at the Grand Canyon in bright sunlight I didn’t need an expensive rig and even with my ‘toy town’ tripod and ultra-cheap circular polariser I was delighted with the results. The expanded view when in manual focus mode really helps confidence of focusing for 4K especially as you can touch the specific area of the screen that you want to expand.

Without the YAGHE the camera offers 3.5mm audio input and headphone output as well as micro HDMI output. Micro HDMI is not the world’s most secure connection, but it's all there is room for on this 560g body. What really elevates the camera to broadcast specifications is the availability of the YAGHE base which can securely be fixed to the body like a chunky battery grip, offering full size HDMI, Quad 1.5 GB HDSDI, 3G SDI, and balanced XLR audio in with phantom power. It also has 12v 1.5 A 4 pin XLR power input (which it needs to run) and timecode input on BNC. It's not the prettiest box but its LED audio level meters, dual audio level controls and robust tripod fixings mean I've grown to love it anyway.
If you want to record externally the YAGHE's quad SDI outputs are available at the same time as HDMI, and if you don't mind turning off the SD card recording 10 bit 4:2:2 is available from both.

The YAGHE injects digital audio straight into the heart of the GH4 without having to go through a 3.5 unbalanced external input, this ensures the best audio recording possible on a camera like this. Also as the camera is powered through the YAGHE it will not go to sleep even if you are not recording internally.

It’s a whopping £500 cheaper to buy the GH4 as a bundle with the YAGHE rather than buying it separately later, so bear this in mind even if you think you might not use it that often. Don’t forget that it doesn’t come with a 4 pin XLR power supply so factor this or a battery solution in too.

I've been recording from the YAGHE via Quad SDI into a Blackmagic Design Hyperdeck Studio Pro recorder in UHD in ProRes. It takes up a whopping great 5.5 GB per minute, but the quality and subtlety of colour recorded in 10 bit 4:2:2 is a pleasure to behold. Panasonic had theirs connected to an AJA Ki Pro Quad at NAB so it will work with those too.

The 10 bit 4:2:2 output also works through the micro HDMI without the YAGHE, but I’ve found only on a very short, high quality cables.  SDI is so much more robust, especially important as remember in 10 bit 4:2:2 output mode, there is no backup from internal recording.

Download the Panasonic Image app for IOS or Android and you have access to most of the camera functions remotely with video preview!  You can start and stop recording and switch quality. The delay is very short and you can even preview video and stills remotely too.  If you use one of the 2 Panasonic Power Zoom lenses you can zoom remotely. 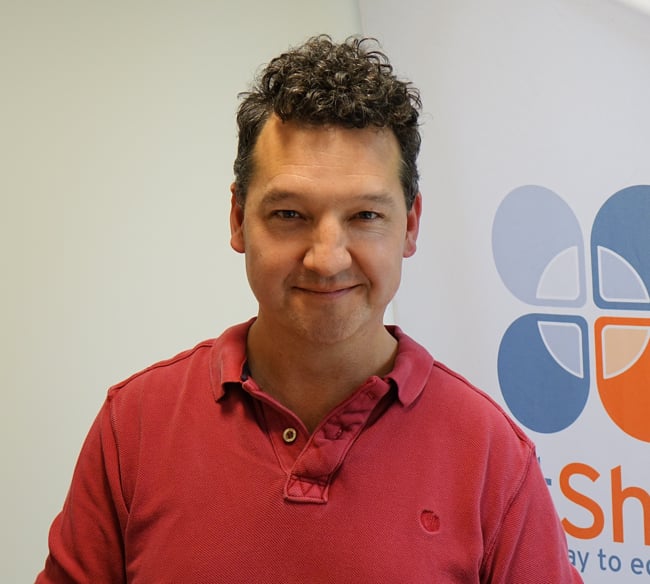 So far I’ve used Grass Valley EDIUS 7.3 for editing the 4K and UHD footage straight from the cameras SD card, Adobe Premiere Pro CC is fine too. In EDIUS I was using a 10bit project with the 8 bit 4K or UHD footage and resampling using Lanczos scaling to create 10bit 4:4:4 HD from the 4k.  If you are of the Mac persuasion check out this app http://www.eoshd.com/comments/topic/5426-mac-app-to-resample-gh4-8-bit-420-to-10-bit-444/   Scaling 4K recorded internally in the GH4’s SD card and converting it to HD is an almost magic process which creates 10 bit 4:4:4 colour video files from the 8 bit 4:2:0 originals.  It takes the extra resolution of the 4K files and converts it to extra colour resolution in the down-converted files. It even takes down the noise if you have shot at high ISO.

I would recommend that you always shoot 4K with the GH4 unless you need 1080 50p or up to 96fps Variable Frame Rate. The camera uses native pixels for both 4K and UHD which will reduce moiré and aliasing compared with pixel binning for the HD (still much more favourable than line skipping)

Using the native pixels has an impact of the crop factor of the sensor and I would say you get a crop factor of 2 for HD, 2.2 for 4K and 2.3 for UHD.
My favourite lens for the GH4 is the Lumix 12-35 F2.8 constant aperture from Panasonic, it gives a range equivalent to 26 – 77mm on a full frame sensor, which is really useful. It also has stabilisation and fantastic autofocus, and the constant aperture means you can zoom without the aperture changing.

Panasonic don’t quote a base ISO, but as you can set the camera to report Gain or ISO, and seconds or angle for shutter speed, I’m guessing that it’s 800, as this equates to 0db.

As I work for Holdan (a UK, Ireland and European Distributor) I see a LOT of professional camcorders and large sensor systems. In my 30 year’s experience of working with video cameras, I can say with hand on heart that the GH4 is the first camera I would trust for both stills and video.