Is it time for Organic user interfaces? 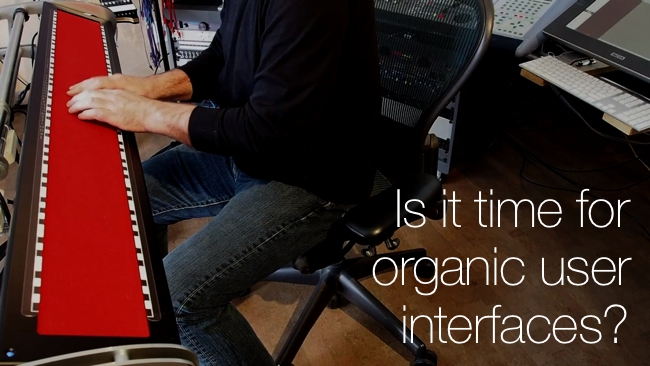 Replay: Is there any way we can bring an "organic" type of fluidity into the way we interact with our machines? Would this help us make better productions?

This is a bit wild but when I watched this video, I wondered if this level of "organicness" in a user interface could be transferred to anything that we do in the world of video and other content production.

What you'll see in the video is a special and unusual kind of musical instrument controller that doesn't have any of the usual digitalness about it. With this device, it's not about the sounds it makes (although that's obviously important) but the way that the sounds are controlled.

Think of a conventional keyboard: a piano, an organ or a synthesiser, perhaps. With these music controllers, the notes are quantised in pitch. What that means is that you can't slide one note into another: every note is separated by a jump in pitch.

Now, not all keyboards are equal. Some of them incorporate a degree of additional sensitivity. Some have velocity sensing, where the faster you hit a note, the louder it will sound (or, some other element that makes up the sound of the note will change). And some will change the character of the note depending on how hard you press the note after your initial contact with it.

But what you can't easily do is slide one note into another. Even though a lot of electronic keyboards have a Pitch Bend control, all that can do is slide a single note (or chord) up or down a predetermined distance: what you can't do is slide gracefully from on note to another, which is what you can do if you're playing an instrument like a violin.

The device you see in the video is specifically designed to work around these problems. There are no restrictions on how you move around the keyboard. Sliding around is easy and controllable. And the result is an organic-sounding instrument that is comparable with a violin or other stringed, bowed device.

The effect is pretty remarkable. It doesn't sound like a digital instrument at all. While it may not sound exactly like a real violin or cello (it has an enormous range), that doesn't matter. It has an expressiveness and openness that you rarely find in electronic music.

It's probably quite difficult to play, as well!

When I saw this, it made me wonder: are there any other ways we could use a controller with abilities like this? I don't mean we have to use a music keyboard, but, are there, perhaps, and activities or tasks that we have to work on in our professional lives where a more organic - more "analogue" interface would help?

Of course, there are plenty of control surfaces around that have "analogue" type functions built in, and it really doesn't matter if the technology is digital or not, as long as it can give the right degree of freedom.

Think of an audio mixing desk. The faders on a digital mixing desk work in exactly the same way as they did when mixing was done in the analogue domain. As long as there are enough digital "steps" to describe the position and rate of movement of the fader, it's OK to be digital, and might actually be an advantage.

Look at the control surfaces that are used with colour grading. They have track balls - which again will be digital, but act in an analogue way.

But these examples aren't really what I mean, either.

What I'm wondering is whether there is another way we can look at user interfaces and control surfaces that would mean they "understand" what it is we are trying to accomplish more closely.

It might not be possible! After all, at some point, we have to distil our wildly creative thoughts into something that is meaningful to the machines we use to prepare and process our media.

Or maybe the ultimate way to do it would be to somehow make the machines understand what we're thinking.  Perhaps we have to do it through natural language, although it would be difficult do do this in a repeatable way.

I think there is a lot we could gain with a more organic user interface, but we are, probably, a long way from even understanding completely what we mean by this.