New GV 4K camera is NOT, we repeat, is NOT a cinema camera 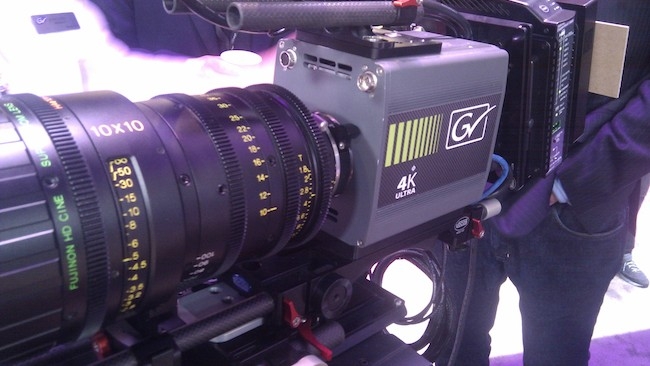 Phil Rhodes asks whether we can expect a 4K Viper in the future and, with regret, concludes probably not.

Keen observers will have noticed that Grass Valley have come up with something interesting: a 4K studio camera. This is fascinating perhaps most specifically if you’re a broadcaster keen to jump on the rapidly-accelerating UHD bandwagon, since there simply haven’t been any studio-configured 4K cameras to date. People have accessorised F65s and the like, but it really isn’t very ideal; the sensors are too big and the lens mounts are therefore selected for rather the wrong style of lenses. Big box studio lenses for 2/3” cameras won’t cover super35 sensors and the general controls and interface setup isn’t really right for studio or truck work with CCUs, vision mixers, and Rec. 709 output. It can be done, but taking out a digital cinematography camera on a studio shoot is a bit of a workaround.

So that’s one thing.

Early adopters of high-end digital cinematography will be familiar with Viper, Grass Valley’s mid-noughties foray into a style of camerawork quite unlike their usual broadcast and studio existence. Based on one of their existing 2/3” studio camera heads, the idea of Viper was to provide an almost raw, ideally unadulterated output representing the high-precision data acquired by the 2/3” sensors. Viper was ahead of its time inasmuch as there was no terribly convenient way to record its output, and things like Zeiss Digiprimes became necessary for it (and F23) to ensure the best possible results from a 3-chip sensor block. It worked, but it was, again, something of a workaround, although one which produced – for the time and even now – some staggeringly nice images.

So that’s another thing.

Astute readers will have recognised the relationship between the above two concepts, and might already be asking the question: can we expect a 4K Viper? According to Grass Valley, well, no. Sorry.

Nice as it would be, particularly for documentarians and other inhabitants of the realm latterly occupied by 16mm acquisition, even the briefest conversation with Grass Valley suggests that they consider Viper to have been a bit of an aberration, and one they could only justify against a backdrop in which few or no digital cinematography cameras existed. There seems to be a concern that the act of outfitting big-chip 4K single-camera production devices for TV work is seen as a bit silly, and that trying to outfit a small-chip 4K studio camera for single-camera work might be just as problematic. I think this misses the point: as I’ve discussed before, taking a shoulder-mounted camera and putting it on a geared head works, given an extension eyepiece, pretty well. Trying to turn an F65 into something you can take to Africa and shoot lions off your shoulder is a bit more problematic.

A shame we won't see one with modern, high-res sensors

Concerns over the suitability of current HD lenses for 4K acquisition aside, it still seems a shame that we won’t see Viper revisited with modern, high-res sensors. Panasonic, after all, have just announced a 2/3”, 3-chip camera aimed squarely at the sort of productions we’re talking about. I’m told that a 2/3” camera with high frame rate capability has already excited the people at NFL Films, who still shoot 16mm for the ability to hold focus in a documentary situation while shooting high speed. This sort of situation is in reality far more common than the high-end, single-camera drama productions that are required in order to create circumstances in which big-chip PL cameras can flourish.

Ultimately it may simply be an issue of fashionability. Lots of productions which aren’t well-funded single camera dramas would like to pretend that they are. Further reasons not to do something like this include the vanishingly small market – compared to outfitting 16-camera trucks. I can see, I suppose, why they’re not that bothered. But I wish they were.