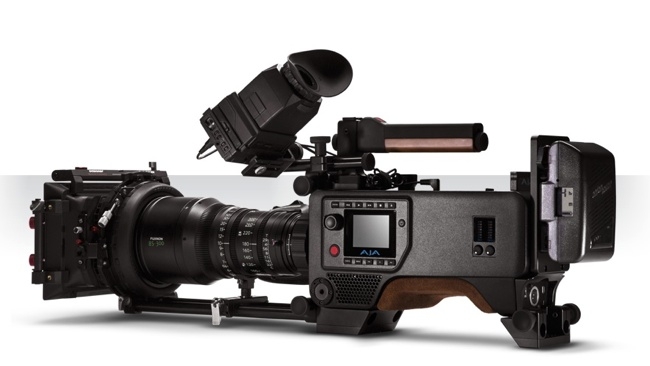 In a world full of showy, quirky camera designs intended to stand out by being unusual, AJA’s first foray into acquisition is perhaps surprisingly – and definitely refreshingly – understated. The company claims it was designed by cameramen and, with only a small caveat about the operator-side controls, it seems ungenerous to quibble, with an unobtrusive, matte-finished, dark-coloured case with all the connectors in sensible locations. Nice touches like a wooden buffer on the top handle might not be the first refinement one might think of, but it certainly makes for a classy aesthetic.

The Cion camera is a tidy, minimalistic device of modest dimensions, and with sensible holes in all the usual places for mounting accessories. It’s almost a shame that this has become a feature simply because so few people did it properly. AJA have bucked the trend and done it properly, even making the cheese plates replaceable, so that nobody has to live with chewed threads.

Technologically, this is mainly something that AJA has done before, most obviously with their Ki Pro series recorders. How much IP transfer there is between those devices and the Cion camera, we can’t tell, but it’s a fair bet there’s a fair amount. The company is, however, anxious to reinforce the idea that it isn’t simply a Ki Pro Quad with a sensor glued on the front. There’s no immediate impression of this, at least in the sense that the first Blackmagic cameras were almost visibly a Shuttle recorder with a sensor attached. Either way, the company’s background in the area, as with its competitors, can’t hurt.

The only tech downside is that the camera takes AJA’s proprietary flash format. This is a surprise to nobody, but I mention it out of a policy of always questioning why this is necessary when the world has so many very capable flash formats already. Running out of media in the middle of nowhere is less easily solved when this approach is taken.

As to the pictures, I shall say nothing; not nearly enough has been released yet. At under $10k, Cion certainly makes Canon’s C-hundred series look very expensive, although I always thought that the C300 was alarmingly expensive for an 8-bit 1080p camera. As ever, we need to be mindful of the on-the-road package price for something like this, with a sharpness-hungry 4K CMOS sensor demanding expensive glass.

This is a problem faced by all cameras of this type, especially if that comfortable shoulder pad is going to be frequently in use in circumstances where a focus puller is a luxury. Also, AJA doesn’t provide a viewfinder, and 1080p viewfinders barely exist at any price, let alone 4K options, so the focus issue is reinforced. One potential solution to this is simply speed and small apertures, and the usability of the camera in various low-support scenarios may end up being largely dependent on how quiet it is at a few thousand ISO.

The other thing that’ll be dependent on simple image quality is that — while it didn’t occur to me to do so — I’ve already heard people comparing Cion to Alexa. It’s a difficult thing to credit given the wildly differing price points and target audiences for the two devices, although I suppose they do look very vaguely similar. AJA’s device claims 12 stops of dynamic range, which is a reasonable engineering compromise over the thirteen-plus of Alexa’s lower-resolution, bigger-pixel sensor, but the simple answer is that we can’t know yet how well it compares to anything in particular. The global shutter is nice and ultimately this camera is part of what we might call the first mainstream wave of 4K, when resolutions beyond HD are assumed rather than a special feature.