Where next for Canon's Cinema Cameras? 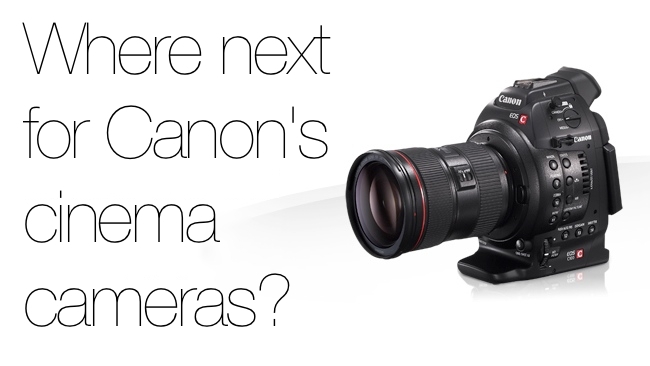 In the midst of rumours about Canon's Cinema Camera range, Phil Rhodes looks at the problems posed by updating your camera range too soon.

I try not to worry too much about what cameras might come out next. If I'm renting, I can rent the latest thing if I need it. And if I'm buying, I really ought to have a business plan that isn't in any way reliant on whether what I own is the latest thing or not. I know this is very easy to say, I know it's possible to buy work with gear, but even so my disinterest in the particulars of the latest and greatest toy is based on the idea that it really shouldn't be about the toys anyway.

But regardless, here we are among rumours that Canon may try to tempt us with additions to their Cinema EOS range. Frankly, unless they're going to give us global shutter, frame rates beyond 200, and other genuine, worthwhile updates, I rather hope they don't. Rearranging the same set of fundamental specifications and features in a sort of fridge-magnet game of design the camera is an iffy way to create a range, especially if your range is fundamentally complete to begin with.

I'm even going to go out on an admittedly creaking and tremulous limb and voice my assumption that any company considering a new release in this sort of situation might reasonably fear the creation of an F35 situation. I refer, of course, to the release of Sony's single-chip digital cinematography camera, the technology of which formed the basis of Panavision's Genesis. It was teased – as I recall – less than two years after the 3-chip, 2/3” but otherwise comparable F23. This was at a time where high-end cameras, body only, were routinely into six figures, and the chagrin of rental facilities with recent, yet-to-be-amortised F23 investments and rather specific (often Zeiss Digiprime) lenses was palpable. This was arguably during the transitional period between the old guard of decade-long broadcast format wars and the abbreviated six month refreshes of the current world. Either way, I'm not sure Canon would want to create the impression that any part of the Cinema EOS line is quite that quickly replaceable, unpopular as I'm going to be with Canon if I turn out to be wrong on that.

That's not to say that the existing Canon cinema range doesn't provoke the odd frown. The first released information concerned the C300, which, despite the subjectively very nice pictures, seems pretty expensive for an 8-bit camera. This is especially so given the slightly modified Bayer sensor, designed to maximise dynamic range to the point where higher precision becomes really essential. While some have fantasised that Canon could choose to remove that limitation with a firmware update, such a move would not only be something of an admission of error, but might also provoke the same sort of disgruntlement from C500 owners as would the release of a hypothetical C400.

4K at that price would be genuinely novel

The idea of a better 7D-level camera doesn't poke my scepticism centres quite so hard, since the original 7D, while a decent stills machine and a solidly-built device, was among the poorer performers as a motion picture camera and is probably due a refresh. With the 1D series expensive, and the 5D Mk. III with its sometimes inconvenient full-frame sensor, a better mid-level product would not, like the hypothetical C200 and C400, need to be wedged into the marketplace with a large mallet. The critical issue with something of that sort might well be what limitations were placed upon the product in order to differentiate it from other products in Canon's line. I wouldn't hold my breath for Magic Lantern to give us 4K raw, for instance. The real interest for both us and Canon is, I suspect, the idea that a 4K device at that sort of level would be genuinely novel and might offer stern competition to Panasonic's enticing GH4.

I guess we'll find out next week.

Here's our piece about the Canon Cinema Camera rumors