Panasonic Varicam: Modular cameras are back! 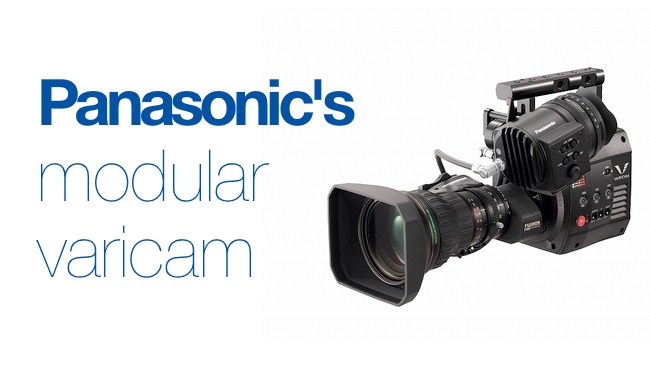 Modular cameras used to be a great idea, so why aren't they now? Panasonic makes a bit for this forgotten market sector with their new 4K-capable Varicam

One of the things about its upcoming 4K camera that Panasonic seems particularly keen to promote is the modularity. As regular readers may recall, the idea of building electronic devices out of individual components is one that's a de-facto standard in the world of heavily-accessorised DSLRs. Looking a bit more into the blue sky, it's also a potential for future standardisation, as we discussed when Dave Hakkens received so much attention over his PhoneBloks concept.

Nobody's ever broken a camera down to that level, though, at least not with the intention of its being a unified, snap-together system. What Panasonic have done is more comparable to the dockable standard-def cameras of the mid-90s, at least in layout – something like the Sony DXC-D35. It's difficult to argue with the idea that modularity promotes flexibility, although it many ways it isn't a new idea. Even with more modern cameras, you could conceivably use a Sony AXS-R5 recorder on F5 and F55 cameras, or on a modified FS700. The growth in standalone SDI and HDMI recorders highlights the public appetite for this sort of separation of purpose, at least at some level of cost-benefit tradeoff.

Size and shape of an ENG camera

What I like very much about the new Panasonic – inasmuch as anyone can like anything that only exists in the public sphere as a few rather small photographs – is the fact that the docked pairs appear to make something the size and shape of an ENG camera. This is a boon to ergonomics that has only really reached high-end digital cinematography with the debut of Arri's Amira. Personally, I've never understood the reticence: while it's often difficult, expensive, big, heavy, unweildy, or all of the above to accessorise traditional cinema cameras for work off the shoulder, an ENG layout can, suitably accessorised, perform admirably in the context of a more formal single-camera dramatic production. This holds until you get down to minutiae like which side the controls are on (and while the pictures Panasonic used on their blog today are from only one side, it looks like their controls are operator-side too).

To return to the modularity, though, while it's a nice idea I suspect that we probably won't see too many people buy both camera heads and one recorder, whether for the rental or owner-operated market. Rental houses will hardly want to see a camera head sitting on the shelf for want of a recorder, and these devices look to be aimed at the high end, where owner-ops might be less willing to spend big money on a complete set of devices. There is mention of the possibility of future designs to suit whatever mounting arrangements these devices have, and perhaps we'll have to wait and see what else emerges before the usefulness of modularity in this case becomes clear.

And as a side note, it's nice to see new, highly capable 2/3” camera designs. The current interest in big-chip super35 cameras is great, but it isn't for every show – especially when not every show has a top gun focus puller.