8mm HD camera makes us smile and not mind if it's any good or not. 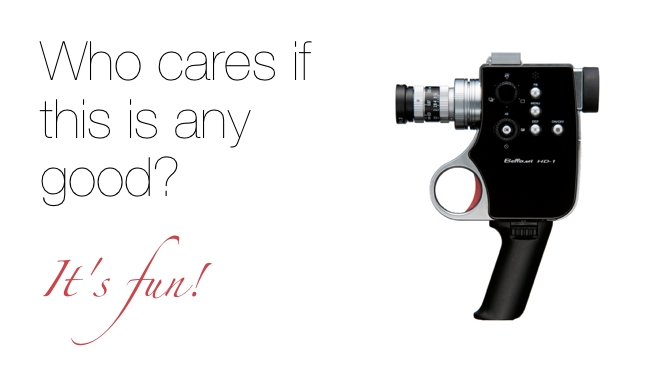 This cheeky design hints at 1970s Sci Fi retro. We don't know what the pictures look like but with a design like this, that's not the most important thing

Setting the way-back machine for 1970s Japan, we find a thriving market in 8mm and super-8 film cameras. With film as a technology still garnering significant cachet and a leaning toward the retro in modern fashion, it's probably not terribly surprising that one of the prominent names of that era has chosen to come out with a product that not only speaks to both the ancient (in tech terms, at least) and the modern, albeit in a way that tilts unmistakably toward the Macbook crowd.

Chinon Industries was founded in 1962 and seems to have been named after either the founder, Hiroshi Chino, or the city of Chino where the offices are based to this day. It became a subsidiary of Kodak in the late 90s, long after 8mm and super8 had ceased to be a mainstream format for independent filmmaking. Thereafter, the organisation has been mainly involved in the development of digital stills cameras, although not directly under the Chinon brand, and as such it won't be widely known that there was any connection to modern, electronic cameras. Various sources list the company as defunct in the mid-2000s, so it isn't clear exactly what connection current releases might have with the historic corporation.

Either way, they're now promoting an 8mm styled HD camera called, with an almost Italian flair for the dramatic, the Bellami HD-1, which looks like it was designed by a particularly forward-thinking Mad Men character in about 1969. Released photos of the HD-1 show a conglomeration of brushed metal and shellac (that must really be plastic), suggesting a Q-branch gadget of the sort that a Connery-era Bond would pull out in a tight spot and use to inflict slightly iffy visual effects on the bad guys. Some people have voiced the concern that it looks rather like a weapon, which is indubitably true from certain angles, but if so then it's the sort of weapon you'd expect to find in a science fiction movie where all the spacemen wear fishbowl helmets.

All of this is clearly and gleefully intentional, and as you may be able to tell, all of this rather good-humoured design extravagance is tempting your narrator out of his accustomed pigeonhole of pained dubiety.

How does it work as a camera? Who knows at this point, and frankly who cares – that's really not the point. If I want clean, crisp video from a device I can fit in a backpack, I'll buy a decent cellphone. If I want to look like a professional, I'll just buy the largest possible ENG camera, festoon it with barely-necessary wiring, and throw a porta-brace on it. As such it's clear that the Bellami HD-1 tempts a sort of expensive-T-shirt sophistry in its very design, but so long as that leads to people making interesting short films with it that's fine, even if I fear the only sort of short you could reasonably make would have to involve long shots of a gruff French private detective standing in the fog below a street lamp, chainsmoking Gauloises.

In all seriousness, as a camera it's unlikely to be spectacular: the sensor is or will be tiny, given that it is designed for compatibility not even with super8 but with the even smaller 8mm frame, which allows space for an entirely unnecessary soundtrack. It really depends how this is handled: much of the film stock shot on original 8mm cameras was reversal, and even very modest modern sensors could exceed the dynamic range. What's more, those 8mm lenses for which it's designed were designed and priced for amateur users, and many of them are less than spectacular (even if you actually want a retro look). Even so, digital processing could, and I bubble over with enthusiasm at the possibility that it will, offer emulation of the great reversal stocks of the 8mm era. You can do it on a 5D, after all. Drop in a few stop flashes (or emulate them with LEDs beside the gate!) and alakazam: here's our video of the time we went on holiday to nineteen seventy-three.

The HD-1 is reportedly to be price-competitive with a Blackmagic pocket cinema camera. Given the far better flexibility of the Blackmagic camera, its larger sensor, wider compatibility with modern lenses, and doubtless other conveniences, as a practical shooting machine it's probably not too soon to predict that the HD-1 will be entirely outclassed. But that's not the idea. The idea is to drive down the Pacific Coast Highway in a VW camper van, recording images of pretty girls and retro lens flares.