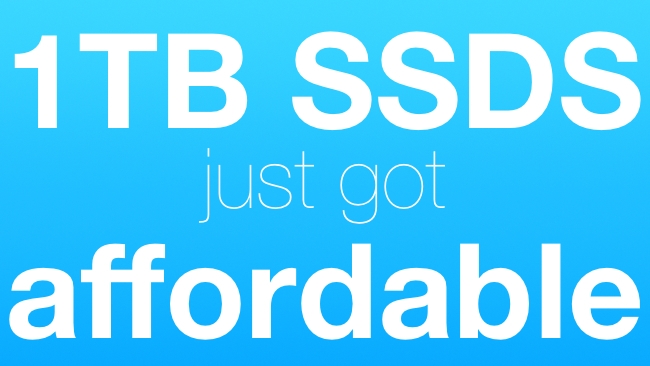 Just a few years ago 1TB of HDD in a PC seemed over the top. But now, you can have nearly a TB of SSD for a price that won't give you sleepless nights

In amongst the daily deluge of emails, we saw an offer from a UK company, Ebuyer, for an SSD. These things are advertised all the time and we're pretty normalised to the steady price reductions that they've been exhibiting over the last year or so. But this offer made us sit up: it was for a 480GB SSD for around £150 ($240).

There's no particular milestone that's been passed here, but this does seem a particularly good deal. Don't go looking for it now because it was for one day only and it's been taken down now, but you know what these deals are like: they'll be back again, possibly even lower.

It also means that solid state memory is arguably around a thousand times cheaper than it was ten or twelve years ago. If that applied to houses, your dwelling might only cost $300 dollars now.

There are very good reasons why houses don't do this: Moore's law, for example. But what it does mean is that there is now no need whatsoever to build a computer workstation with a hard drive as its main storage device.

It's sometimes hard to comprehend how big a place 1TB is to store material. Have a look at this article, to remind you.

Scan have just been in touch to say that they have a 1TB SSD for £327, which is a current, in-stock price.