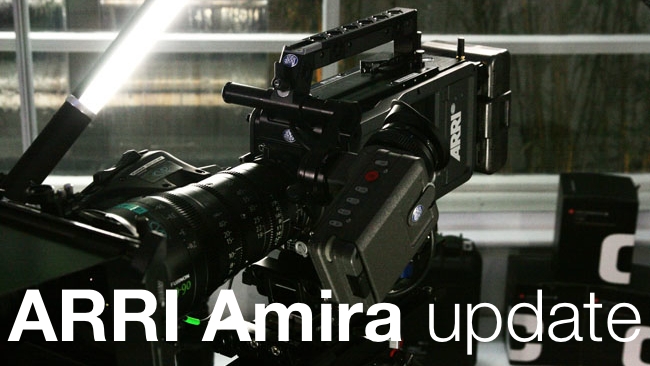 Arri showed its new darling, the documentary camera Amira, at an event in central London on Friday. There aren't that many new facts since its debut at IBC last year, although there was more talk of the replaceable lens mounts to suit EF and B4 lenses. To call the B4 option a mount is perhaps a bit of a stretch, since it will need to include at least some optical components to allow a B4 lens, even with its doubler engaged, to fill the super35 sensor of the Amira, but the option is very welcome. Also shown was the option to use one of IB/E's adapters which are designed to mount B4 lenses on PL mounts in general.

The Amira is lighter than it was

Particularly of note is Arri's intention to put Amira on a bit of a diet, based on feedback received. Apparently the is intention to cut around a kilo (although estimates varied) from all-up weight, mainly by milling out extraneous material from the alloy casing. Still, the weight issue with the outfits as demonstrated so far is possibly more to do with the Fuji Cabrio 19-90 zoom, which makes the whole outfit rather front-heavy without offering the range of something like an HJ-series Canon. It'd have been nice to try something like that to get a better idea of handling, even at the cost of minimum aperture and sheer optical performance over the Cabrio. Otherwise, ergonomically it's a dream, with particularly smooth and well-implemented versions of the adjustable  viewfinder and shoulder pad options which have been normal on ENG cameras for a couple of decades. The top handle is particularly well-designed to allow top mounting with standard threads and to permit fore and aft balance to be trimmed, which will be a boon to Steadicam operators working in low mode.

To broaden the topic for a moment, this issue does generalise out to other camera systems. Easily-handled lenses for big-chip cameras are becoming a bit of an issue. Big chip pictures are often nice, but all too often at anything but the highest high end we frequently find ourselves shooting on less-than-ideal stills glass (as the EF mount option for Alexa, perhaps surprisingly, demonstrates). Finding ergonomically workable and financially realistic options for fast-moving documentary is difficult. After all, larger, lower noise sensors provoke higher sensitivity which alleviate the demand for low apertures but require physically larger lenses to achieve the same aperture. At some point physics steps in to ensure it's a a bit of a zero-sum game. Anyway.

Otherwise, it's as near to ideal as you could imagine. To repeat my earlier concerns, it does have a rolling shutter, and if Alexa experience is anything to go by (which it should be) it's possible to provoke flash banding with xenon strobes. Power consumption is arguably a bit high, although Arri promise that upgrades will be possible, as they have shown with Alexa, given the FPGA-based electronic architecture. These are characteristics which will either suit particular use cases or not and there isn't much more to say about them.

The controversy with Amira, if any, is the looming shadow of 4K. I hasten to add that I accord completely with the Arri line that resolution is only one of many factors affecting perceived image quality. I agree completely that I'd rather have two thousand really nice pixels than four thousand mediocre ones. Manufacturers from Red to Blackmagic have shown, in essence, that resolution demands tradeoffs in dynamic range and noise, especially at high frame rate. The need for 4K is far from established, and conversation after the presentation revealed that most parties with a reason to care feel the same way. Distributing 4K is currently rare and possibly pointless, especially at 25fps where motion blur can quickly negate the advantage. There is some small caveat that it's nice to acquire at a higher resolution than we will distribute, for higher quality (especially from Bayer sensors) and greater flexibility in post, but Alexa and its siblings offer some of that advantage anyway with a sensor that's around 3.5K wide.

The problem is that while all this may be true, and while qualified people may frown at the clamour for 4K acquisition, there is nevertheless market interest in it. We may end up being pushed into sharper, noisier pictures by fashion alone, which would be a shame. Even so, distributors at the event talked of ordering dozens of Amiras to cover expected demand over the few months from the availability date in April. Alexa was, we're told, typically broken even in less than a year, and if Amira's performance as an investment is similar, the 4K issue is unlikely to impinge too much. Given Arri's reputation and the excellence of the Alexa sensor, it's hard to see this doing poorly.