The GH4 really is amazing! 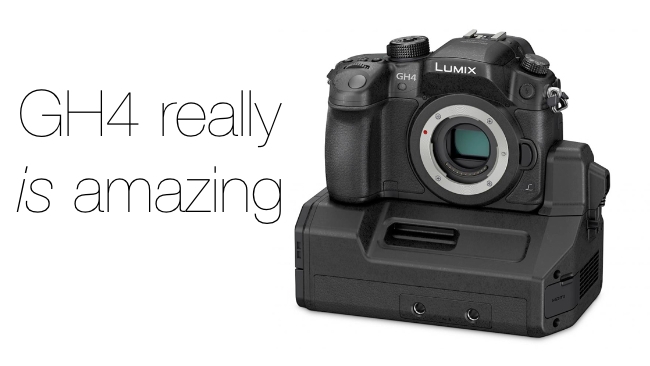 We've held the GH4, complete with base unit, and seen the pictures on a good 4K screen. It's hard to believe pictures like this come from such a small camera

Today I held the GH4 fitted with its base unit for the first time. I'm at the Broadcast Video Expo in London,  a sort of UK-only version of NAB or IBC. It's quite small but is perfect for getting hands-on with the product.

I have to admit that I hadn't realised that the footage playing on a big (sorry to be so vague) 4K monitor was from a GH4. It rally did look amazing, and I would have totally believed that it was shot on a big, top-end camera and not what is, essentially, a top-end consumer one. It looked as though it was from a prestigious Discovery Channel or BBC wildlife documentary. The colours were good, it was contrasty, and it was very sharp. There was nothing whatsoever that would suggest it was shot with a camera that's rumoured to cost less than $2000. Of course, we don't know what the lens was, or what it would have cost!

I wasn't able to actually use the camera but I did handle it with the base unit attached. It fitted to the bottom of the camera very snugly and felt almost as if the two parts were permanently fixed together.

The combination was reasonably heavy but less so, I would say than Canon's 1DC. With the weight at the bottom of the camera, it felt stable. I think the two parts together will make for a very stable camera.

And in terms of functionality, you should absolutely buy a base unit with this camera. Who wouldn't want proper audio or SDI output to use, perhaps, with an external recorder.

In a way, the combination of the base unit and the GH4 is carving a small but significant niche for itself, where a consumer camera, paired with a very obviously professional base unit, becomes something quite different altogether: a very competent still camera, and a very powerful 4K acquisition tool.