How does raw video compare with HDV? (seriously!) 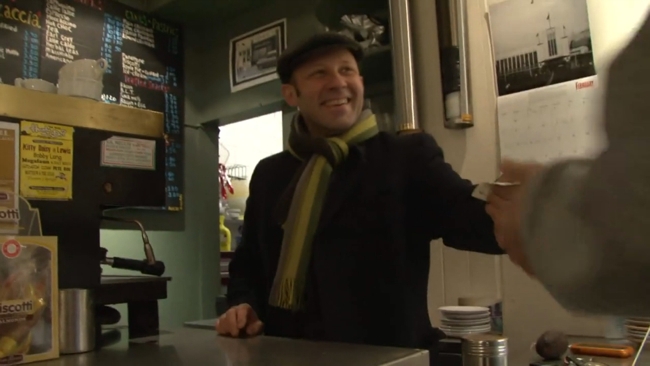 RedShark reader Krasnapolski saw Peter Haas' film Peter Pan Bakery, shot with a Digital Bolex D16, and sent us a link to a very similar production: Mario's Cafe by Roland Denning, a customer at the cafe. It was shot with a Sony Z7 HDV Camera. It's fascinating to compare the two!

Do you remember HDV? It was a very clever mash-up of modern and ancient technologies.  The modern bit was that it was High Definition. The fossilised part of it was that it still used tape.

That's being a little unkind because DV itself was pretty revolutionary, and there was nowhere near enough memory available for this standard definition format to be stored in solid state. When DV came out, tape was the current paradigm and it all worked well enough, apart from a litany of glitches if you tried to capture from a DV tape using early DV capture cards and drivers.

By putting an "H" in front of "DV" the new format was born. It was almost as simple as that, because very little else changed. Apart from, obviously, HD sensors, the tape mechanism and the tape was pretty much the same. Instead of the intra-frame DV codec, MPEG-2 was used, and we were launched into an era of editing long-GOP codecs. Because we all went though the pain barrier then, and got used to using intermediate codecs or simply very powerful PCs to deal with the long-GOP overhead, things seem much easier to us now, and it will be less of a hurdle for us to jump to 4K (unless we're using raw...).

So, although it was possibly not as state of the art as it might have been, HDV was a success, and Sony made some particularly good cameras, many of which are still in use.  In fact, the sensors and optics on them are so good that many people have given them a new lease of life with an external recorder like an Atomos Ninja, which bypasses the on-board compression and records directly to edit-friendly ProRes.

How does it compare?

So, how does it compare with capturing raw video on a Digital Bolex D16. Luckily, we can see, because we can compare the two videos side by side.

There's nothing fundamentally different about the light in a small, crowded Cafe whether it's in London or New York. There isn't much and it's very unevenly distributed between ceiling lights, dark corners and bright window light.

One big difference, apart from the format, is that the Digital Bolex was, I understand, using prime lenses, whereas the Sony would have been using its own fixed zoom lens.

So, how do they compare?

On the face of it, they look very different. And so they should: the Sony recorders interlaced video in a 4:2:0 format to a long-GOP codec 8 bit codec. The Digital Bolex records to Cinema DNG and has a much wider dynamic range. It looks a lot more like film.

Even though I'm pretty sure the Sony records interlaced video, It doesn't look terribly interlaced to me. If it has been de-interlaced, it's probably by Vimeo's encoders/transcoders, and they do a good job of making interlace comb artefacts look more like motion blur.

The Sony's dynamic range is obviously very limited compared to the Digital Bolex. A lot of the time large areas around the dull ceiling lights are blown out.

But I have to say that both films are really lovely. They both work as engaging, quirky documentaries.

Congratulations to both filmmakers!

And let us know what you think in the comments

See both films after the break