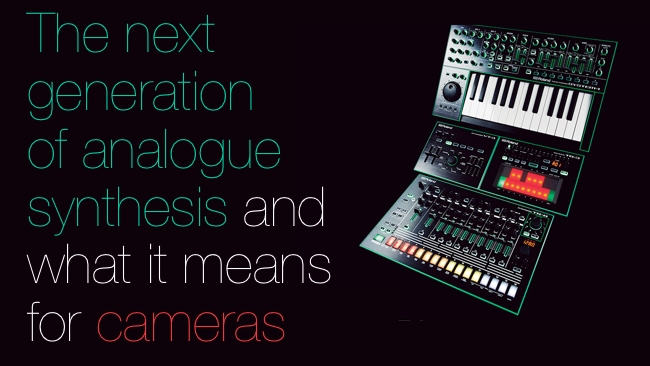 The power of digital, the look and sound of analogue

Each time there's a new jump in technology, designers have choices. One of the choices they can make (and one which you wouldn't necessarily expect), is whether to use the new capabilities to create something new and modern, or old and retro. Surprisingly, in some fields, the latter is the most popular choice.

Nowhere is this more so than in electronic music, where the wave of retro electonic sounds has been surging forward for many years, if not decades. Another way to put it is to say that the cheesy yet exciting sounds of the analogue synth and drum machine have never really gone away.

There's a strong analogy here between the grungy, imperfect, and often out of tune, sounds you get from a vintage synthesiser and the "look" of film in the 50s, 60s and 70s.

But although we can "filter" modern sounds to make them more like their decades-old forebears, wouldn't it be better to make them sound like that in the first place?

There are purists around who would argue that nothing - absolutely nothing - sounds like the original, and there are good reasons for them saying this.

For all the modernity of electronics, the equipment is still made out of real-world stuff. An old synth is a mish-mash of circuits, components and controls. In the early days of analogue, the state of an analogue synth would vary from day to day like the weather. Capacitors would blow, resistors would vary, joints would go dry, and, at the very least, you'd have to frequently retune.

At a slightly deeper level of detail, the individual components would each have their own imprint on the sound - especially if driven beyond their "safe" limits.

Digital equipment is dependable, reliable, and, some would say, thin and boring compared to analogue circuitry. I don't agree with that completely: there are some wonderful digital and virtual synths available today, but I do admit that they all lack the warmth and fuzziness of a slightly decrepit analogue keyboard.

Early attempts to "model" analogue synths were impressive, especially when they began to offer all the "analogue" facilities like detuning and overdrive, but while they could be convincing as "snapshots" of the original, they rarely managed to model the more intangible nuances that were actually what provided the essence of the sound.

A few generations of Moore's Law

Now, a few generations of Moore's Law further on, we're starting to see a dramatically different and wholly more plausible approach to analogue emulation. We're seeing it first in audio, but - as we'll see in a minute, this could lead to some incredible cameras.

Roland has just released a series of digital instruments that are a homage to its 808 drum machine and associated gear. The 808 propelled dance music though a wormhole and into a space where it is still as relevant as ever: examples of the 808 can be found on Ebay for around £3,000 dollars, which is a lot to pay for thirty year old electronics. At least this stuff is fairly easy to repair!

But this approach can only go so far when you're emulating not just a sound, but an analogue electronic circuit. And that's because every single component can potentially affect the sound of the instrument, especially when they're involved in the oscillators (the actual sound creators) and the filters (which modify the sound).

What Roland has done is create DSP (Digital Signal Processing) models of the components themselves. The new Roland devices know how the components work individually, and in context, in the sound generation circuits.

Analogue synthesis enthusiasts are the hardest people to please, but it looks like Roland has done exactly this with their new devices, which apparently sound just like the originals, but better.

All of which makes us wonder whether you could apply a similar sort of technique to emulating older film technology.

Arguably, this is already being done, with products like Film Convert (which we reviewed in depth here) and, of course, it's not the circuits inside analogue cameras that that give them their "look": they're largely mechanical and optical devices. But this new approach - on a broader level - might enable us to capture new and more authentic looks within the camera. Perhaps the same device could capture the raw footage and - transferred as metadata - apply processing further down the line.

Which is actually how it's already being done in some cases. The real breakthrough that we're waiting for with video emulation of film might actually be a better understanding of the entire film process, and a better model of that.

We're already almost spoiled for technology that could do this.