New details emerge about ARRI Amira: will be massively upgradable in software 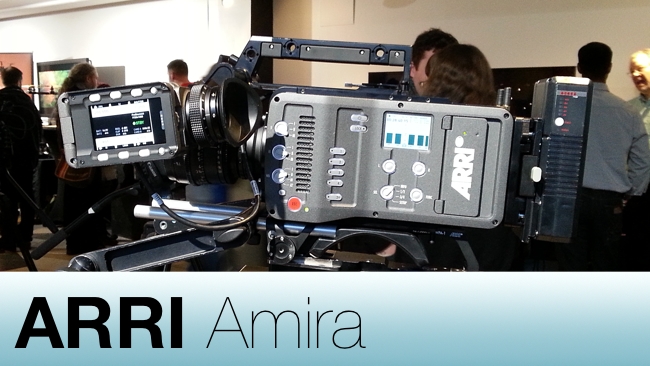 AMIRA, the brand new documentary style camera by ARRI, made its worldwide debut at Dublin’s Digital Biscuit conference this week, and we're slowly learning more about this intriguing camera

Impatiently awaited by shooters worldwide since its announcement in September, AMIRA fills a gap between high-end motion-picture cameras and consumer-type DSLR solutions.

With a curved body, designed for flexible use, the “lighter, smaller, faster, cheaper” sister of ARRI’s flagship ALEXA records HD 1080 or 2K pictures and can be used straight out of the bag by a single person on location.

Presenting the camera in Dublin, Milan Krsljanin, director of group business development at ARRI, explained that the big emphasis for this camera was on ergonomic features such as sliding dovetails for quick balance adjustments.

The body of the AMIRA is curved for comfortable positioning on the shoulder or when carried against the leg and, is see-through for air-flow purposes. The camera also accommodates right or left eye shooting.

Switches and configurable user buttons are easily accessible. The viewfinder combines a high-res OLED eyepiece with a fold-away LCD monitor that provides access to camera functions straight from the shoulder.

Flexible multi-channel audio options are accessed from the right-hand side of the camera. Frame rates and colour balances can be changed on the fly. Exposure control is supported by integrated, motorised ND filters as well as zebra and false colour tools and focusing is supported by an advanced peaking function.

The camera comes with an interchangeable lens mount, for quick changes on location. “Lens changes can be done solo, perhaps not in the field, but at least in the hotel room,” said Krsljanin at the launch.

Going back to its roots

“ARRI is going back to its roots in documentary filmmaking. We’ve done digital cinema cameras, the world is happy with that. Now, we want to bring this  documentary camera to the industry” he said.

ARRI's spokesman emphasised that high frame rate is very important for people doing natural history type work. “AMIRA, like ALEXA, can go up to 200 fps with full picture quality and no compromise. It’s built around the same sensor as ALEXA.”

The AMIRA workflow is all ProRes, on in-camera SanDisk CFast 2.0 flash memory cards with super-quick data rates (the demo-ed one did 120gb/s). “This allows recording of ProRes 444 up to 100 frames per second. No other card can do that. Read-out speed is also very fast.”

AMIRA also comes with a number of preloaded 3D LUT-based looks that can be applied on set during the shoot. Alternatively, productions can custom-build their own 3D LUTs in external grading systems, load them into the camera during prep and even modify them in-camera while filming.

Both ALEXA and AMIRA are built around FPGA chips. “They are not the cheapest but it’s a hardware that’s open to huge changes,” commented Krsljanin. “The evolution is clearly visible, for example when you compare the 2010 and the current versions of ALEXA. The amount of development we put into firmware and software is astonishing, we are improving our cameras constantly.”

Pricing for the AMIRA, which could be confirmed in the next week, is not yet announced but is expected to fall between €25,000 and €30,000. It’s understood that first orders will be accepted soon and that first deliveries could be made as early as April.