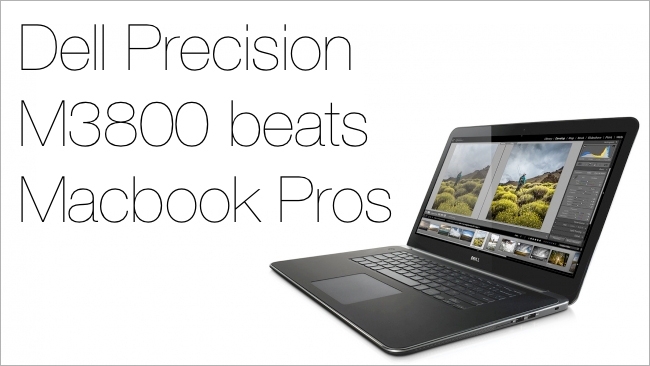 Apple's Macbooks are a pretty common sight around media professionals, and, until recently, they've been a top choice for workstation-type performance.

But now, Apple is not the only computer manufacturer in the game when it comes to desirable, powerful laptops. We reported in October that the upcoming Dell Precision M3800 was likely to usurp Apple's dominant position as the top creative's mobile computer.

There were several reasons why we thought this. First, it looks good, in an understated way. Second, the specifications are out of this world. If you've ever seen a retina screen on a Macbook Pro, it's hard to imagine anything better, but now you don't have to. The M3800 has a much higher (Quad HD) resolution.

And it trumps all other high resolution laptop screens by being touch-capable. As you'll see in the following video, this means that you can even use touch on the colour correction controls in Adobe Premiere.

Speaking of which, new tests reported on Dell's blog have shown that with Adobe's video editor, the M3800 beats the Apple's performance on several counts.

Here are the specifics, measured against an 2013 Macbook Pro Retina and a 2012 model.

The M3800's QHD+ touchscreen display has significantly higher resolution than both Retina displays.

The M3800 comes with Windows 8.1. Not everyone holds this operating system in the highest esteem but we like it (mostly) and it does come into its own with a touch screen.

M3800 comes with three times the storage capacity of the 2012 MacBook Pro and 33 percent more than the 2013 MacBook Pro.

The M3800 has had over 50 content creation and engineering applications certified for use with it. What this means is that these applications are expected to work optimally with the machine.

This is an important workstation

We think that this is an important desktop workstation. It outpaces Apple on the important metrics and for those who are not in the Apple universe, it means that they can take with them a powerful, good-looking laptop that doesn't have to play second-fiddle to the products from Cupertino.