Opinion: Will all cameras eventually have to have Global Shutters? 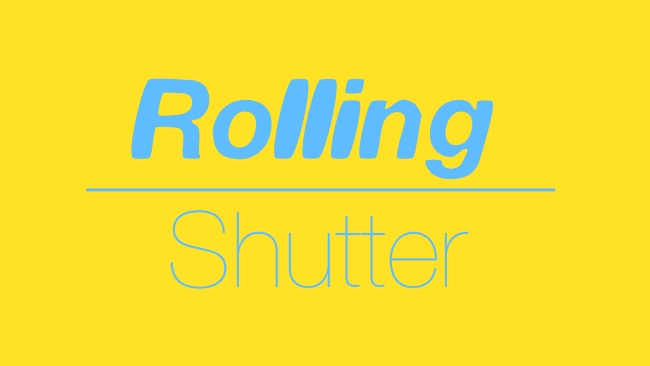 Here's another chance to read this great article by Phil Rhodes on why cameras need global shutters. Cheaper, cinematic cameras come with a cost - they tend to have Rolling Shutters, which means that rapid movement can be skewed. The ability to buy cameras with global shutters at all price points can't come soon enough, according to Phil Rhodes

Shooting strobe lights at the moment is a quick route to frustration, assuming you're using one of the currently-available cameras that doesn't quite read all of the pixels from its sensor simultaneously. And that applies to the vast majority of modern cameras: Red weren't quite the first, but they were certainly the people who made the cost savings of a rolling-shutter design a part of the modern world of cameras. On the face of it, it's difficult to see this as a benefit, since skewed motion and flash banding are unattractive artefacts of cost, rather than quality-focussed engineering, although the very high resolution sensors currently in vogue would not have been available, or at least not so soon, and not with such high dynamic range, had this compromise not been made. I'm still not sure it's a very good thing, but the motivation behind the decision is clear whether you think it makes sense or not.

The situation is now fairly well understood, but briefly recap the, rolling shutter is an artefact created by the amount of time taken to read pixels from an imaging sensor which is still exposed to light. If the subject changes during this readout, the remaining rows of  pixels in the image will be exposed to the changing light. As a result, objects moving horizontally may appear to be skewed somewhat diagonally by an amount proportional to the relationship between the speed of motion and the readout timing of the sensor. Some cameras, such as the Arri Alexa, use rolling shutter but have extremely brief readout time, minimising (though not entirely removing) the problem.

Strictly speaking, rolling shutter is an old problem. The mechanical shutter of a film camera can't possibly move as fast as the progress of the electronic readout down an even reasonably fast digital sensor, but it turns out that this doesn't matter much in reality. The film shutter is in an out-of-focus plane which means that the sharp, horizontal edges of flash banding are softened to the point of almost complete invisibility. In essence, a mechanical shutter fades the image out, albeit with some areas of the image fading out rather faster than others. Strobe lighting was used, for instance, in some of the action scenes of Aliens, without objectionable artefacts. Digital cameras which use rolling-shutter sensors may also use a mechanical shutter (F65 and certain Alexas do this, as did D21), which alleviates the problem. A common test approach is to shoot a revolving drum painted black with a white vertical stripe. On rolling-shutter cameras, the stripe appears to become something of a spiral wound around the drum.

Probably the worst possible subject for a rolling-shutter camera is the xenon flash tube, as used in strobe lights and camera flashes. The discharge is extremely brief and with an extremely fast rise and fall time, from tens to a few hundred microseconds, depending on the desired light output and the way the flash tube is being driven. Even the very fastest electronic rolling shutters do not operate quickly enough to remove all possibility of the light going out halfway down the frame. Strobes based on LEDs are only slightly less of a problem as their rise time, due to the activation delay in the phosphors used in white LEDs, is very much longer; even so, it may still paint a fade of light across several dozen to a few hundred lines of the picture. Shutter-synchronised strobe lighting, such as Outsight's CreamSource LED array, can avoid the problem by reading a video signal feed from the camera and ensuring that the light never goes on or off during the shutter readout period, but that's an expensive and potentially time-consuming workaround for a newly-invented problem.

Ostensibly flicker-free lighting can also cause issues. A fluorescent tube driven at – say – 24,000 pulses per second might present no problem to a traditional 24fps camera, which would see roughly a thousand flashes per frame (some types of lighting can produce visibly segmented motion blur due to this, but it's reasonably unusual for this to be objectionable). Even if a series of frames either included or excluded one complete pulse of light due to relative timing jitter, the maximum brightness variation would be one thousandth of the light's output (and most real ballasts go many times faster than my easy-maths example). This is the situation that exists with almost all electronically-ballasted lighting and isn't complained about. But the readout time of a rolling-shutter sensor is typically many, many times faster than the frame rate, and as such, even very high frequency lighting may be read as a visible series of horizontal stripes or bands down the frame, as its flicker interacts with the readout time of the sensor. Tungsten lighting doesn't usually do this, but some ostensibly flicker-free HMIs can.

All of this sounds like a reasonable workaround until you see something like, say, the 2012 remake of Total Recall, shot on Red Epic, a camera with a rolling shutter. As an action movie, there's a lot of use of flashing lights but also gunfire. Muzzle flash is brief enough to cause flash banding, and the problem is much in evidence throughout the film. Google brings up visual effects artists with credits fixing rolling shutter problems for Dredd, presumably on a similar basis. There are other problems, too – since cameras generally read out their sensors top to bottom, there can be additional complexities when using pairs of them in a 3D mirror rig, which would ordinarily mean that one camera is upside-down. Since stereo 3D is very sensitive to even tiny misalignments in the image, even quite sedate camera motion could create problems due to asymmetric skew between the two cameras. Various solutions exist; some cameras are capable of reversing their readout direction, intrinsically flipping the image into the bargain, to solve this. The use of 2:1 anamorphic lenses doubles the apparent skew, since the frame must be enlarged to twice its in-camera width to recover an image with normal geometry. Rolling shutter is a pain, even on big, big movies, and we can only hope that it will soon be remembered as a mere bump in the road on the way to much better equipment.

Happily, such equipment is already starting to appear. At the higher end, Sony's F55 has a global shutter and doesn't rely on mechanical parts to achieve it. Blackmagic are promoting their imminent 4K Cinema Camera as having electronic global shutter. [Don’t forget the Digital Bolex D16 - Ed.] It's inevitable that the expensive moving-parts approach of  a mechanical shutter won't be a practical solution for very compact or low-cost cameras, although we should be aware of the potential loss with electronic global shutters. Every pixel must have extra circuitry such that they can all be caused to stop accumulating energy simultaneously. That extra circuitry takes up space that could have been used by the light-sensitive area, reducing sensitivity and dynamic range, as well as reducing semiconductor yield and thereby increasing costs. Multi-layer sensor technology, as we discussed in a previous article, may be helpful here, but will presumably not be cheap in its early iterations.

Until then, we're likely to be limited to the F55 or other less-than-moderately-priced options such as mechanically-shuttered Alexa or F65. Or, thinking outside the box, 2/3” CCD broadcast cameras, which are almost invariably globally shuttered. F900s and Vipers, if you can find them, are often quite cheap to rent now and are still excellent cameras, and can be paired with a modern flash SDI recorder to avoid being shackled to an HDCAM workflow. Sadly, though, we'll have to wait for the next cheap high speed camera before getting into slow motion: the only affordable option for independents is still FS700, and that has a rolling shutter, as do many of the more recent high-end high-speed cameras, albeit to an absolutely microscopic degree.

So, it's hard to like rolling shutter, and I hope we'll see more global-shutter cameras soon.