Is the Mac Pro really for professionals? 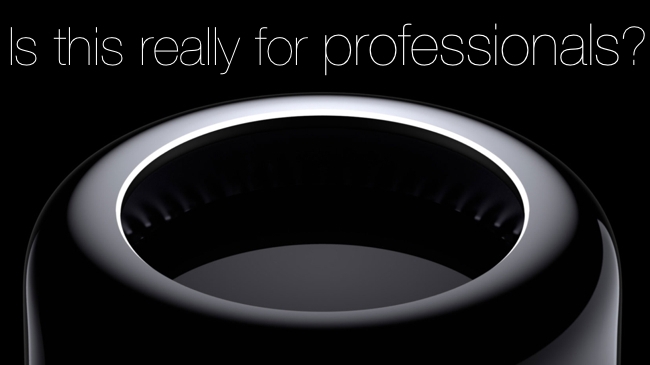 Is the Mac Pro really for professionals?

An overpriced vanity machine engineered for looks over utility - or the answer to your 4K prayers?

The nature of a power user’s computer is most often defined by expandability: a consumer might never want or need to crack open the chassis, but a professional’s hardware is often an evolving story of upgrades and expansions as budgets allow or even on a project by project basis.

Ever since the Quadra 900 back in 1991, Apple’s most powerful machine has invariably been a tower with the amount of cards and flexibility of upgrading being a key criteria for judging its value. While Apple pioneered sealed unit iPods and iPhones in the consumer space, for professionals the Power Mac G4’s innovative mounting of the logic board on the interior of the side door made replacing just about anything on the machine exceptionally simple.

Ironically, this very openness helped seal its fate, falling afoul of European Safety regulations about exposed fans and electronics. The last European units shipped in February 2013, but lack of USB3 and Thunderbolt had signalled its demise long before then - Tim Cook was prompted to promise a new Mac Pro in June 2012 as professionals were so disappointed by that year’s minimalistic Mac Pro update.

And now that the all-new Mac Pro has finally arrived, there’s plenty of people who question whether it really lives up to its ‘Pro’ name. The giant aluminium tower which was always bigger in real life than pictures has been shrunk to a shiny cylinder which manages the opposite trick. Is this really something a professional can rely on? Or is it another G4 cube, a radical design which is ultimately too under-specced and over-priced to last?

However vast the number of Apple Store permutations for the Mac Pro, cynics expected the lack of internal expansion space to be matched by a locked down motherboard. To achieve those slimline MacBook designs, Apple typically solders the CPU directly onto the motherboard. Fortunately, Other World Computing accomplished the first thorough teardown and contrary to the expectations found that the CPU was placed on the motherboard using a standard LGA 2011 socket. The Service Manual details the steps required to replace the CPU if needed. RAM is designed to be upgradeable with standard parts, however the twin graphics cards and SSDs both use custom connections. This means there’s no off-the-shelf upgrade options available right now, however OWC were optimistic that solutions could be produced in time. For the graphics cards, Apple’s pricing is, for once, cheaper than customers purchasing direct so immediate demand will be limited, but it’s reassuring to know the option is open.

There’s no getting around the lack of internal storage, but in many applications this convenience is increasingly irrelevant. Small production houses, for example, often run off NAS drives which, once a project is complete, can simply be wrapped up and put in storage as a cheap archive.

Moreover, the Mac Pro itself is even suitable for rack mounting, to a degree - with the unit being certified to be mounted on its side.

At the present time, initial estimates of PC comparable pricing suggest the Mac Pro is aggressively priced for what it offers. So the principal critique of the Mac Pro essentially focuses on Thunderbolt.  While a re-imagined old-style Mac Pro could have offered high-speed PCI access to the motherboard, the Mac Pro’s highest performance expansion is all via Thunderbolt 2 with six USB 3 ports as a back-up. To get the most out of it, Thunderbolt is the way to go.

Of course, Apple has a long history of driving forward innovation in I/O. It didn’t invent USB, but the iMac was built around it and that drove adoption forward. It co-developed with Sony FireWire/iLink which went on to become a de facto standard for video editing before HDD/Solid State media switched everyone to file-based operation. Thunderbolt isn’t yet anywhere near as popular as FireWire became, USB3 and other formats are good enough in most circumstances and invariably cheaper. Apple intends for the Mac Pro to change that, a strategic initiative which if it bears fruit will tremendously benefit the MacBook and iMac line-up which also come with Thunderbolt as standard.

Professionals working on 4K projects at the high end have until now largely relied upon building their own bespoke PC systems. The Windows PC eco-system is all about this kind of flexibility, but real-time 4K performance doesn’t come cheap and knowing which components play well together is as much art as science.

The Mac Pro comes out of the box as a 4K unit and if you’ve any questions, there’s an Apple Store and Apple Support to call on, plus you can be sure specialist resellers and rental houses will be keen to offer premium support to get those 4K orders rolling in.

As to software, FCPX was once seen as Apple’s exit from the professional marketplace, a slash-and-burn approach to business-critical features in order to provide a modernised code-based with a simplified interface for the prosumers. iMovie Pro(sumer).

In retrospect, we can see that analysis was plain wrong. Month by month, release by release, Apple has steadily restored professional features and bankrolled a new factory in Austin Texas to build a machine precisely tuned to run FCPX.

All this effort could be irrelevant if the competition was firing on all cylinders, however Avid’s ongoing financial troubles are well known while Adobe’s switch to a subscription model hasn’t been universally well received, to say the least. A 7.2.1 update for Premiere provides some optimisation for the Mac Pro, but it’s not clear how soon it will be able to deliver anything comparable to the performance of FCPX.

Back in the Game

So Apple and FCPX are at least back in the game.

Apple has never shipped a machine with built-in Blu-ray and completely avoided the misfire of consumer 3D. It has, however, led the way with ‘Retina’ quality graphics for the iDevices and MacBooks. Moreover, use of a high-quality codec to deliver 4K at data-rates comparable to 1080 HD via streaming is increasingly seen as the main standard-bearer for home 4K in the absence of any clear news on 4K Blu-ray (almost certainly requiring new hardware).

The Mac Pro gives Apple a robust 4K production workflow to feed into a 4K iTunes, so maybe next Xmas all those flagship 4K TVs from Samsung, Sony et al will actually have some content - and maybe even Apple iTV as competition.