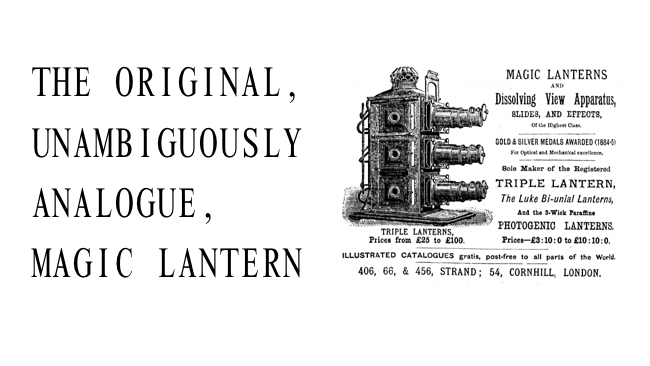 RedShark Replay: "It produces Effects not only very delightful, but to such as know the contrivance, very wonderful; so that Spectators, not well versed in Opticks, that could see the various Apparitions and Disappearances, the Motions, Changes and Actions, that may this way be presented, would readily believe them super-natural and miraculous”

Recently, we've heard an awful lot about something called Magic Lantern, although generally as a piece of software, not in reference to the historical projection device. The original Magic Lantern – essentially a projector for what by more modern standards seem particularly large glass slides – is interesting not only because it represents the genesis of what is now cinema, but also because its development tracks that of related technologies in lighting and photography. More than that, though, it's worth being aware of the fact that audiences at the very first Magic Lantern shows were happy to pay for something that was not much more than a slideshow simply because they had rarely seen projected light forming recognisable patterns before.

And those original shows, perhaps as early as the fifteenth century and certainly by 1650, were primitive in the extreme. Even producing glass plates of (what was then considered) optical quality was complex, with blown plate being manufactured from around 1620 in London and involving the manual grinding and polishing of both surfaces of a piece of hand-blown glass. The only available light sources were flames, either from candles or from oil lamps of little greater power, and the original shows must have been extremely dim even given the low effective f number of an optical system based around slides perhaps three inches square. 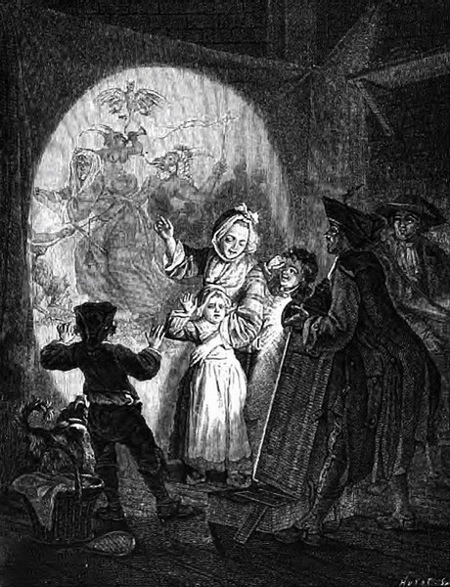 Among the earliest luminaries (see what I did there?) of the lantern was the prolific natural philosopher Christiaan Huygens, after whom the Cassini-Huygens probe mission to the Saturnian moon Titan, among many other things, was named. Then, as now, content was king, and the earliest shows concentrated on supernatural imagery. To an audience completely unused to the effects of projected light, in a time during which the public understanding of science was limited, it's easy to see how Huygens' device wound up being referred to as the “lantern of fright”. In the 18th century, German illusionist Johann Georg Schröpfer projected images of demons onto clouds of smoke, an effect later (much, much later) used to realise a supposedly computer-generated face for an artificial intelligence in the television series SeaQuest DSV. Similar tricks are still done with projection onto the of a high pressure water spray. Despite the technological limitations, it must have worked pretty well: Schröpfer committed suicide, convinced he was being pursued by real demons, although in his defence he did claim beforehand that he'd be able to resurrect himself.

The age of Show-Business

Given all of this history and showmanship, which eventually developed into the phantasmagoria shows of the 18th and 19th centuries, it's easy to overlook that just like the movie industry of today, this was show-business. People made a living out of it, and, we might assume, constantly sought ways to make a better living out of it. This was a driver of technological development, the shades of which are visible to this day. Few of the light sources that would eventually be used in the magic lantern were developed specifically for it, but their use charts the progress of lighting technology quite nicely. Beyond the most basic candles and oil lamps, the development of the Argand lamp in 1780 allowed a more concentrated, stabilised flame through the addition of a glass chimney to create steady draught. Gas lighting didn't exist until William Murdoch's experiments of 1792, although it would only be ten years or so until Humphry Davy (yes, the Humphry Davy) started to realise that passing current through a pair of carbon rods could sustain an arc which would heat the carbon itself to incandescence. This was arguably the first really serious artificial light, capable of hundreds or thousands of times the output of a candle, and one that remains in use, albeit in extremely niche applications. More advanced implementations of the carbon arc stabilise the flame of burning carbon by winding one of the power supply cables around a nearby bar of ferrous metal, producing a magnetic field that reduces wobble and allows for a stabler light, as well as providing automated feed mechanisms to advance the carbons as their tips are burned away. The first public applications of the carbon arc were, unbelievably, for street lighting; it must have been incredibly high maintenance.

The famous limelight, produced by heating a block of quicklime (calcium oxide), became available in the 1820s. It was quickly replaced – before the end of the 19th century – with much more convenient arc lighting, which is understandable given the need for a supply of hydrogen-oxygen mixed gas to allow a limelight to produce a sufficiently high temperature. There are interesting quirks to the technology in as much as the calcium oxide does not glow only because it is hot, but also due to a phenomenon called candoluminescence. This causes it to emit light at a higher frequency (that is, bluer) than would be expected simply because of the temperature. The oxygen-hydrogen flame heats the ceramic to only around 2000 degrees kelvin, which, for a perfect blackbody radiator, would imply that the colour temperature of the light would also be 2000K. However, candoluminescence adds enough blue light to the output that most limelights emitted at over 4000K, which would have looked very blue compared to contemporary light sources based on flame. Limelight, as well as carbon arc, was the point source of light which made really decent projection possible, as well as projection-type ellipsoidal or profile lighting devices such as followspots. 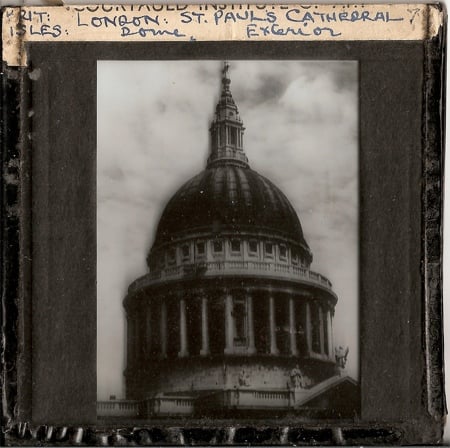 A latecomer to the field was the gas mantle, something which had been attempted since the earliest days of gas lighting. Austrian physicist Carl Auer von Welsbach finally figured it out, soaking an assembly of cellulose fibres in a solution of thorium (plus 1% cerium) oxides. This is almost precisely the same arrangement that gas camping lights still use, although the faintly-radioactive thorium oxide has been replaced with that of zirconium. In use, the fibres burn away, leaving an almost impossibly delicate structure of the oxides. When heated, a bright, slightly greenish light is produced. Using a gas burner similar to the bunsen burner used in laboratories, which produce a blue-hot flame which itself has almost no light output, the mantle can be heated to create light with much greater efficiency than by using a flame to create light directly.

Eventually, in the mid-1870s, incandescent light bulbs would become available, and their
convenience advantage over limelight, gas mantles or carbon arc started to displace the older technology even though the high intensity point source of a carbon arc exceeded that which has ever been available from incandescents. 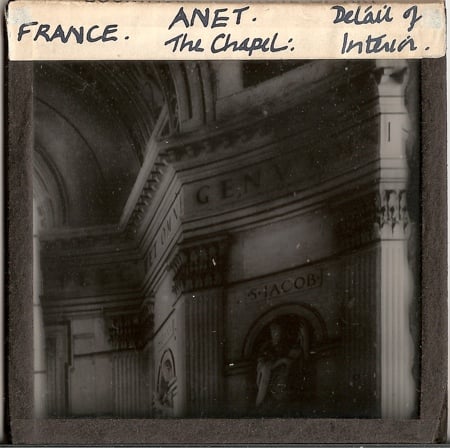 All of these technologies were at some point used in Magic Lanterns and later film projectors, although all this did was make the images brighter and the work easier; the motivation to produce more engaging shows also provoked development of various novel optical effects. The first slides were hand-painted onto glass, and thus full colour was available. Later, photographic slides would become possible, and devices essentially indistinguishable from a Magic Lantern remained in use through the middle of the twentieth century as tools for lecturers (see the film Mona Lisa Smile, wherein Julia Roberts' character uses one in the mid-50s in an art history lecture).

By 1895, when Louise and Auguste Lumiere more or less scotched the magic lantern with their system for full photographic animation, complicated designs involving levers, geared linkages and other mechanisms for creating motion in slides had been developed. Chromatrope slides overlaid several layers of transparency with a mechanism to move one against the other, producing kaleidoscope-style effects with subtractive colour mixing. The shows were developed further with dual or triple-lantern arrangements, permitting compositing and dissolves between several images. This could become surprisingly sophisticated, with the eyes and face of – for instance – a demon projected separately, so that it could appear to look around. Slides of various types could be mounted in a long rack to provide easier access. I think we can accurately picture a man with serious sideburns moving around quite urgently to produce a watchable show involving all these
refinements. 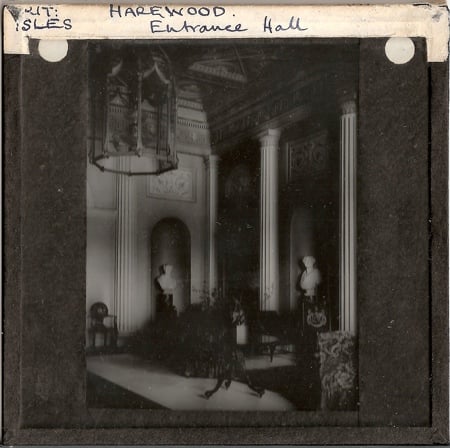 One of the nicest things about magic lanterns is that they were made in huge quantities, so if you happen to want to own one, you probably can. They're all over ebay for a couple of hundred units of currency. And, given that slide projection technology hasn't really changed in about a hundred years, you can happily buy one dating from the dawn of the movies in the knowledge that, with a new light source, you can project demons onto clouds of smoke just as well as anyone ever has.