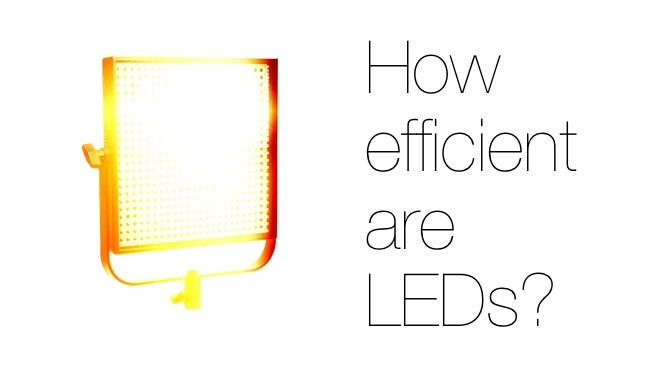 We've talked about LEDs before, in terms of how the technology works, its benefits and caveats, and we're likely to talk about it again because, well, the birth agonies of a new technology are always entertaining. Entertaining as it may be, though, unless you're buying it with someone else's money, it's as well to be aware of how the options compare, and going by a few conversations I've seen happening on message boards recently, the question over whether LED is actually more efficient than preexisting technologies is being somewhat subsumed by the shiny-object syndrome so common to people who work with technology. So, the purpose of this article is not to talk about solid-state light on its own terms, but in comparison to other technologies with which it directly competes.

It's all about efficiency

Before any LED manufacturers start firing up their email clients and working up the requisite level of vitriol, let's first make it clear that I'm not here to sledgehammer anyone's product unnecessarily. Efficiency – or more properly luminous efficacy – of lighting equipment is measured in lumens per watt. Really good tungsten might make 35. LEDs, with good power supply engineering, often break 100. Perhaps a more realistic competitor, in terms of both price and efficiency, is HMI, against which the comparison is less clear-cut. HMI, for hydrargyrum medium-arc iodide, is a 1960s invention originally developed by Osram with the specific intent of providing high-efficiency lighting to the film and television industry. Hydrargyrum is the Latin name for mercury (literally “liquid silver”), which emits UV light when electrically excited. Metal halides – iodides, hence the name – serve to convert this UV light to broad-spectrum white.

The technology is fundamentally similar to the metal halide lights seen in warehouses and other industrial lighting, although tweaked to provide near-ideal colour temperature and colorimetry, and equivalents are made by other manufacturers. The result is a light that emits at about 5600K and has a colour rendering index in the mid-90s, although the driving electronics can be complicated, especially if flicker-free operation and the ability to start while still hot from previous running is required.

LED does not currently have anywhere near such good colour rendering as HMI, nor can it produce such high power densities that make it easy to produce projector (ellipsoidal or profile) lighting devices, so there are big prizes waiting for the development lab which works out how to make, say, a one-hundred-watt single-junction LED. Until that time we're stuck with clusters of LEDs in the one to maybe five watt range. Good LED and good HMI are, however, fairly similar in terms of efficiency – at about 100 to maybe 110 lumens per watt in practical systems, they're both about four times better than tungsten.

As a practical usability concern, LED wins over HMI in pretty much every way. It can be driven with unvarying DC power, to produce light that's truly flicker free at any frame rate you like, and they're physically robust. The electronics can – notwithstanding complex designs including optical feedback for colour calibration – be simpler, or at least cheaper to replicate, than an HMI ballast. LED doesn't have any problems with starting when hot, whereas even HMIs advertised as hot-startable aren't always entirely reliable when attempting to do so. Crucially for situations such as broadcast studios, LED is dimmable, and without colour shift.

However, at the time of writing – and this analysis will date very quickly – the overwhelming majority of LED lighting that actually exists in the world is not really trying to compete with HMIs because most LEDs are softlights, and that's the case simply because it's an application to which big arrays of small LEDs lends itself easily. The prototypical example of this is the foot-square Litepanel, although many pretty similar devices using pretty similar technology probably perform in pretty similar ways. There isn't really a direct equivalent to this in any other technology, with the possible exception of Zacuto's irreverently capitalised PlaZma Light, but we might reasonably compare it to something like a Kino-Flo Diva Lite 401. On paper, fluorescent tubes may lag somewhat behind HMI and LED at perhaps 75 to 90 lm/W, and carefully colour-matched tubes may tend toward the lower end of even that range because their phosphor mix is optimised for good colorimetry rather than sheer output.

And practically, the numbers do seem terribly stacked against the fluorescent. It consists of four 55W tubes and therefore represents something like five times the power of the competing LED, but achieves only slightly greater peak output (173 lux over the LED's 143, at four feet, numbers from the manufacturers). The thing is, the LED only does this over the fairly narrow angle into which the light is focussed by the individual optics on the emitters, whereas the Diva pumps out photons into an arc of something like 90 degrees before even beginning to fall off at the sides.

The efficiency situation here is therefore highly dependent on exactly what you're trying to achieve. You can put a louvre on the fluorescent, which will make it behave more like the LED optically, but at horrendous cost: anything outside the desired angle (Kino-Flo supply 60 and 90 degree louvres) is simply absorbed by the black-painted louvre and dumped as heat (and no, you can't chrome the louvre – or rather you can, but it'll create a sort of half-way house which doesn't duplicate the LED's behaviour).

Changes for the Future

This murky situation is likely to change in the near future: In the laboratory, LEDs up to 275 lumens per watt have been developed (by Cree, announced last December), although there's the usual concerns over how manufacturable they are and these enormous test-bench figures don't reflect anything that's imminently likely to exist as a deployable lighting instrument. In the real world, Philips announced a 200-lumen-per-watt fluorescent tube replacement back in April.

Encouraging as this is, many quoted figures represent the efficiency of the light source itself, overlooking the inevitably less-than-ideal performance of any associated electronics. In most current lighting technologies – including HMI, LED, and fluorescent – the losses in the electronics can have a huge effect on the efficiency of the overall system. Certainly the very cheapest, nastiest LEDs often use simple resistive current limiting, which is likely to be both inaccurate over temperature and quite horrendously inefficient electrically.

And then we need to consider why we actually care about efficiency: because energy is expensive, and generators brought to a location are especially so. The concept of not having to have generators at all, and to be able to run an upscale shoot from common wall sockets, is attractive.

The thing is, the very best-engineered LEDs, things like Arri's L7 series and the Zylight F8 we saw at IBC, are also expensive, often more expensive than HMI of the same effective output. Compare the 90W Zylight F8 at US$2400 with an Arri 575W HMI, which is just over twice the price (US$5600 at B&H for the ballast and head) but many times the light. You might need to be in a situation where you needed the dimmability of an LED to justify the cost. And okay, if you needed the dimmability, you'd probably be replacing tungsten, so the efficiency savings would be more attractive, as would the potential savings in air conditioning costs if you were something like a news studio. Otherwise, well, It's complicated.

Assuming continued development at the current rate, it's not totally unreasonable to anticipate a world in which practically all lighting is solid-state within a decade. Given all these complex considerations, the answer to the question of whether LED really is efficient is: sort of, sometimes, maybe, and depending on the circumstances. And the most common circumstance, the flat-panel softlight, may not be an area where LEDs do particularly well.