The key to higher storage densities 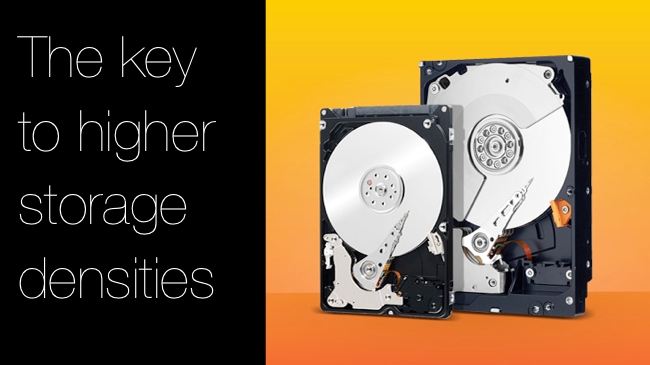 The key to higher storage densities

The race is on between mechanical (rotating) storage and Flash memory. And it's not over yet...

The film and television industry has been storing things using encoded patterns of magnetism, which isn't the most obvious choice, when you think about it, for at least sixty years, since the BBC built the VERA video recorder in the early 50s. Phonograph-style disk recorders actually predate that, with a device called Phonovision, compatible with Baird's mechanical television system, operating in the late 1920s as the very first video recording technology.

Skipping just a few innovations along the way, we now enjoy magnetic disks with many orders of magnitude more performance. Perhaps the latest innovation among these is HGST's (latterly Hitachi, now a division of Western Digital) recent announcement that the long talked-about advancement of patterned media may be moving a few steps closer to fruition. While I don't want to turn Red Shark into an information technology site, it's pretty obvious why this is important: with flash still outstripped by spinning metal on a sheer cost-per-gigabyte basis, our ability to shoot pictures of better fidelity is more and more controlled by the cost of post-producing them (about which more anon), and that is mainly down to storage. Better storage, therefore, is a big deal, especially in a world where 4K production is being widely pushed.

The purpose of patterned media techniques is to control how the magnetic material is laid down on the platters of the hard disk, simply because this influences how small a zone of magnetism can be created and thus the density of information. The earliest magnetic recording systems used either steel wire or a tape that was little more than finely-powdered rust – iron oxide – stuck to a strip of plastic. Development since then has been frenetic, with most current hard disks using vacuum-deposited magnetic media on glass discs using a technology called perpendicular recording, which was made commercially viable in 2005 and involves creating zones of magnetism with their north and south poles in a vertical, rather than horizontal, plane. This technology has been demonstrated in devices storing a bit less than one thousand gigabits per square inch, equating to a complete drive capacity of a few terabytes, the limitation being the ability to reliably store and retrieve the state of an area of magnetism comprising only a few dozen grains of the requisite magnetic material.

Patterned media attempts to improve this situation by controlling, on a microscopic scale, the formation of magnetic media in precise arrangements. Papers by the University of Texas, who did a lot of the work on this, suggest that a doubling in density is a realistic expectation. Achieving this is not straightforward, since the lithographic techniques used to produce silicon electronic devices do not behave well at the sort of feature sizes required by patterned media. The solution, which I promise I did not cull from a rejected Star Trek script, is a material known as the block copolymer, which is self-arranging into useful patterns when heated. One of the difficulties is in getting it to arrange itself into the concentric circles required for hard disk tracks, a problem which may be addressable by using more conventional photolithography techniques to provide a guiding shape for the process.

As ever, this technology is a considerable way from commercial fruition. Perpendicular recording, as we saw above, did not hit the big time until 2005. Although the earlier higher-than-high-density floppy disk used it, it was not a commercial success – and this after the process was described in the mid-seventies. Still, with conventional spinning-disk manufacturers clearly after every edge they can get hold of in the war against solid state storage, it's likely that this will happen absolutely as quickly as the financial resources of Western Digital, who now own what Hitachi have become, can make it happen.