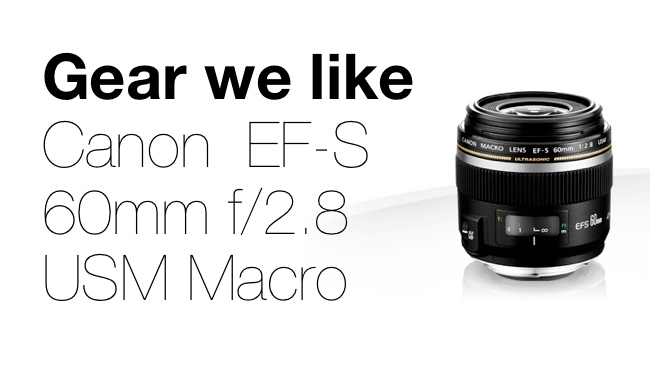 Occasionally, one comes across a piece of equipment that one likes. This process is often unscientific, although anyone in a technical trade will usually grow to appreciate equipment that works well, particularly if it's competitively priced as well

This is an experimental first instalment in what I intend to be a series of articles on things we like – perhaps old things, perhaps new things, but in general stuff that goes into the kitbag no matter what I'm doing. As such, this is all opinion, although I hope it's informed-enough opinion to be useful. Our first subject in this orgy of gear-lust is the lens Canon refer to as the EF-S 60mm f/2.8 USM Macro. This fist-sized lump of technology is of course of interest mainly to people who shoot with cameras such as Blackmagic's Cinema Camera, or of course any of the APS-esque sized Canon DSLRs for which it is ideally suited. It would work, one feels, quite nicely on a C300. Obviously, it isn't a full blown movie lens with a metal barrel and nice focus markings – in fact, focus handling is one of the few glitches, which we'll consider later. Even so, given the lens-challenged reality in which we currently live, where ancient Nikon prime sets covered in rust and mould are fetching eyewatering prices thanks to the explosion of low-end digital cinematography, this sort of glass is still very relevant.

This EF-S mounted lens is of course unsuitable for full-frame cameras such as the 5D Mk.3, although it's interesting to consider what it would take to achieve what this lens does on a sensor that big. If we want to consider the value proposition from the outset, probably the nearest full EF lens equivalent (for a similar field of view) on a full frame camera is the EF 100mm F2.8L, which currently rocks in at something like double the money. And yes, I did just compare the 60mm EF-S macro prime to Canon's high end range with the red stripes on them, because it probably is that good. Canon claim the L stands for “Luxury”, but my Canon-owning friend tells me it stands for “large amount of money”. Compared to the cost of comparable movie lenses, this seems a bit unfair, but either way they do not apply the L designation to EF-S lenses.

What do we want form a lens?

It's probably worth considering what we actually desire from a lens. Speed, obviously. Corner to corner sharpness at all aperture settings, of course – we can always filter out excessive resolution optically or in post. Pretty bokeh, at all stages of defocussing, especially when a lens offers macro performance. Certainly there is no visible barrel distortion. The EF-S 60mm prime excels in all these areas, reminding us that zoom lenses are intrinsically a compromise, and perhaps one best avoided – the fact that this is a prime makes it very, very much easier to achieve high performance in these areas without inflating the price. Critically for very sensitive modern cameras, it also retains decent sharpness all the way down to fairly small apertures, although as with almost anything it does suffer if used near the absolute smallest stops and a well-prepared user will make sure ND filters are available. The aperture remains reasonably circular at all stages, which is one reason soft focus looks nice.

The other thing we tend to like is decent build quality and compactness. In all honesty I can't find any part on the visible body of this lens that isn't plastic, with the obvious and necessary exceptions of the filter threads and EF-S mount, but even so it feels firmly constructed and the action of the focus ring is positive.

Downside of the Design

This is where we do hit a small snag, in that this is very much a stills lens, and one designed to rely on Canon's excellent ultrasonic motor technology to shunt bits of glass around While the action of the focus control ring itself is reasonably firm and positive, given the price of the lens, it's a friction drive onto the actual internal components which would complicate the use of a follow focus. There is considerable static friction and trying to pull from the barrel during a gentle camera move might be a problem. There are of course no gears – we wouldn't expect them – although the ring itself is about half an inch wide, goes all the way around the barrel, and feels like it'd stand a gear ring being clamped on fairly gently. Grip too hard and it binds on the inside of the barrel, which is unfortunate. That said, it's entirely internal focus, so you can mount your 52mm polarising or graduated filters without the requirement for a bulky mattebox. Some might argue about the value proposition of buying a large number of circular filters as opposed to a mattebox and a much smaller number of 4x4 square ones, but that's a topic for another day.

60mm on an APS-C sensor is pretty long, a medium telephoto, despite what people tell us about 50mm being a “normal” lens for 35mm motion picture work. It isn't ever going to be anyone's run-and-gun lens, which is a shame, as I'm not aware there's anything else of similar performance. There are well-respected 15-85 and 17-55 zooms available in EF-S mount which are as fast as this lens, which might be a better general-purpose buy, albeit for one and a half times the value of the 60mm. But for more formal work, and anything involving macro, it's a very solid performer.