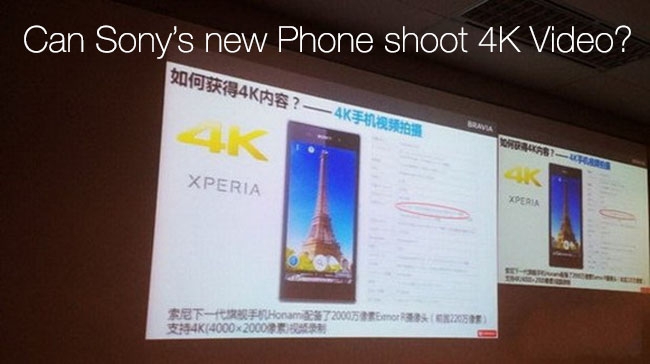 Leaked slides from a presentation in China seem to show that the new Sony Experia i1, code-named Honami, will have the ability to shoot video at 4K resolution

Technology news site Engadget spotted a post on the Chinese social networking site Weibo (which has now been deleted). The post showed some slides from a Sony marketing presentation about their new flagship smartphone the Experia i1. The slides show that the phone will be capable of shooting video at 4000 x 2000 pixels and one of the taglines is "How do you get 4K content? By shooting videos with a 4K cellphone" Of course 4000 x 2000 pixels is not one of the standard 4K resolutions but that may just be marketing simplifying the information for a non-technical audience.

The camera in the i1 is a 20 Megapixel unit with a rumoured resolution of 3936 x 5248 so that may be capable of shooting 4K video and the processor is a Quad core Qualcomm Snapdragon running at 2.2Ghz so there is plenty of processing power available.

Although the handset only has 16GB of memory onboard it has a micro SD slot for expansion and if it is using H265 encoding you should be able to get a reasonable amount of 4K footage on a memory card.

The big question of course is why would you want to shoot 4K video with your phone?

Sony have thrown a lot of weight behind 4K and have a complete end-to-end solution in the professional arena. Putting a 4K camera in the hands of consumers will only strengthen the demand for 4K TVs and if your smartphone is a Sony then why not buy a Sony 4K TV to go with it? In fact recently Sony were running a promotion where buyers of their high end TVs received a free Experia handset so maybe this model will be paired with their 4K TVs.

Of course it doesn't hurt that there are other 4K TVs on the market already and if the oft rumoured Apple TV turns out to be 4K resolution then that is yet another outlet for 4K video from your smartphone.

With IFA 2013 coming on the 6th of September we may not have long to wait until we find out if the Experia i1 is the worlds first smartphone capable of shooting 4K video.