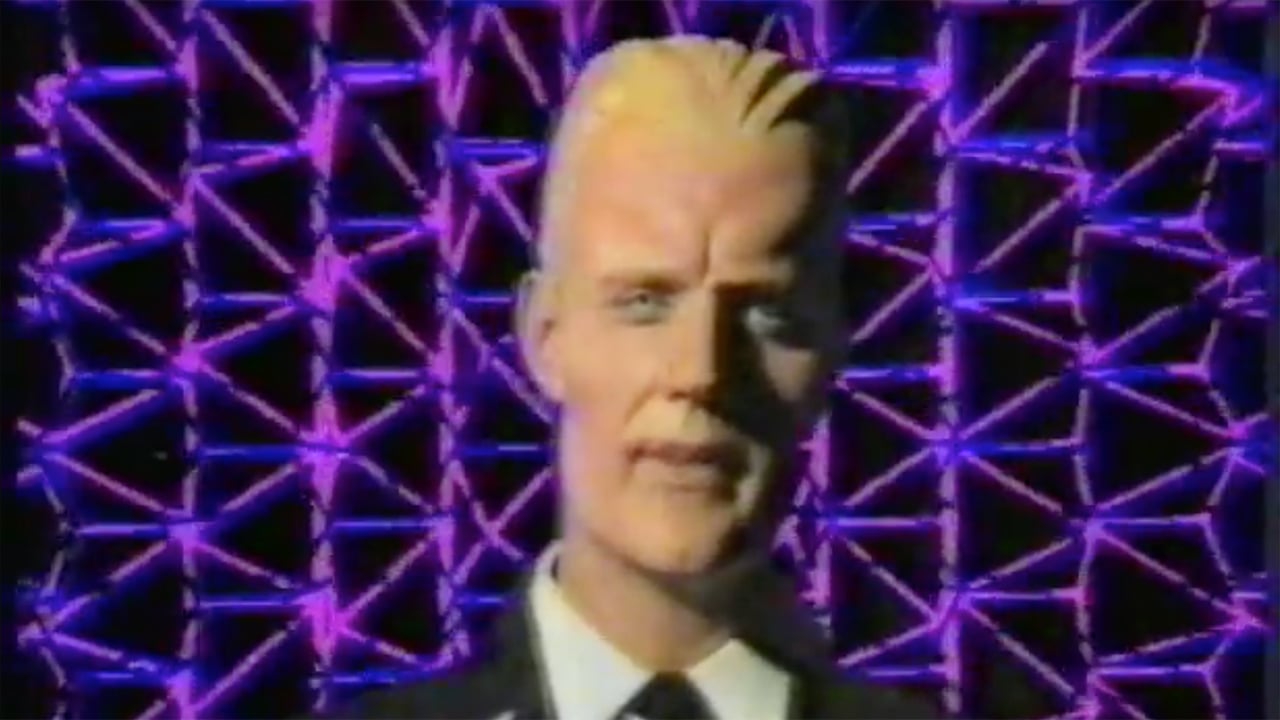 Replay: He became a cult legend, infuenced one of the most bizarre incidents on telelvision, and his legacy can still be felt today. Ladies and gentlemen may we re-introduce M M Ma Max H H Head Headroom!

There's a scene in Blade Runner 2049 in which Deckard and K discuss the meaning of life in a dystopian Las Vegas casino featuring holographic projections of Elvis and Frank Sinatra. The retro holograms glitch and stutter into life, like scratches on vinyl, but in disturbing and sinister fashion to suggest digital meltdown, technology out of control.

It’s likely director Denis Villeneuve wasn’t aware of it but this visual concept and tonal mood was arguably established by a British TV character of the 1980s. Cult hit Max Headroom has seeped into popular culture ever since.

One of the enduring legends surrounding Headroom was a bizarre TV hacking incident in the U.S which happened thirty years ago this week and remains unresolved to this day.

In 1985 Peter Wagg, a producer for Chrysalis Records, was approached by Channel 4 to develop a MTV-style music show. Wagg’s idea was to breakup otherwise unrelated music videos with some sort of funky graphical sequence. He turned the idea over to writer and ad agency creative George Stone who came up with the show’s name, ‘maximum headroom’ to represent filling the viewer’s head full of sound and vision. They weren’t blind though to the pun "Max. Headroom, 6.5 feet’ a sign used in multi-storey car parks across the land. Indeed, this became part of the narrative built up around the character.

Credited as co-creators, the trio morphed the idea into a weird computer generated presenter in a suit which Morton deliberately and cheekily thought would annoy anyone who liked MTV and which Wagg described as “like Johnny Carson meets Terry Wogan.”

At this point in development the character appears to have taken on a life of its own, with the co-creators inventing a whole back story for Max which led them to expand the initial series of thirteen short sequences into an hour long feature made for U.S cable network HBO.

Max Headroom: 20 Minutes into the Future featured the exploits of an investigative journalist working to uncover a form of subliminal and lethal advertising known as ‘blipverts’ at the mysterious Network 23. While tracking the story Carter’s head meets a parking barrier in his open-top sports car. Knocked unconscious, possibly dead, the network download his brain, reconstitute him as a computer model of himself, and puts him out on air. Max Headroom is born.

Both Carter and his digital alter-ego are played by American actor Matt Frewer in a weird transatlantic accent. Frewer had appeared in Monty Python’s The Meaning of Life and subsequently had parts in Honey, I Shrunk the Kids, Lawnmower Man 2, Watchmen (as the villain Moloch), Steven Spielberg’s The BFG and Netflix’s Carnage but Max remains his best known performance.

With computer-generated graphics still a thing of the future in the mid-eighties, the production team used prosthetics to emphasise Frewer’s already well-defined facial features, shot him head and shoulders against a neon-striped background and added the now trademark freeze-frame blips in the edit.

Shot amid bleak London landscapes, the look of the feature echoed the sci-fi paranoia of Blade Runner (1982) and Brazil (1985) and had the cyberpunk mentality of William Gibson’s 1984 novel Neuromancer.

A franchise followed including a two-season run of Max Headroom in which he interviewed celebrities like Michael Caine and Jack Lemmon in front of a studio audience, the C4 music series, an array of official merchandise and global commercials for Coca-Cola – ironically enough directed by Ridley Scott.

Synthpop act Art of Noise recorded Paranoimia with Max on vocals and a promo featuring the character which reached 12 in the UK charts in 1986.

Chrysalis by the way owned the intellectual copyright.

Other references include Back to the Future Part II (1989) in which Marty McFly walks into a retro diner and is greeted by a digital maitre d' with white hair, a gentle voice, and smooth, almost plastic skin.

At the peak of the personality’s popularity art seemed to imitate life when, on November 22, 1987, all transmissions at Chicago's WGN-TV – including of a local NFL victory - were rudely interrupted by a character appearing to be Max Headroom - in fact a crude interpretation or homage.

A second hack hours later was made on a local PBS station. Lasting just a couple of minutes, this was one of the strangest crimes in TV history - a rare broadcast signal intrusion, with no clear motive, method, or culprits.
Thirty years on, the hacker has never been found and remains a source of theory and counter theory on internet forums.

Just as quickly, Max faded away but his sarcastic wit and stuttering delivery reverberate and now appears oddly prescient.

Here is a human amnesiac whose only means of communicating is via TV. He exists in a near future is one in which television has become the sinister, global governing body. In a pre-digital TV era, he is exposed to hundreds if not thousands of simultaneous channels and his commentary on them is acerbic to say the least.

In that you can perhaps see Charlie Brooker’s Screen Wipe as a successor. Every YouTube star and the Google channel itself is forecast and mocked. Video as the medium of mass control is evident in everything from Bond movie The World is Not Enough to Kingsman and even Despicable Me 3 (at a stretch).

The early films of David Cronenberg, like Scanners (1981), is an obvious reference for the fusion of man, machine and media with Luc Besson’s 2014 Lucy taking this stream of consciousness the logical next step.

Indeed, Max Headroom can be read as the first artificial intelligent character on TV, as a satire on the nature of fake news and on the role TV presenters or TV personalities have on our lives.

The hack itself is a neatly subversive attempt to reveal our thrawl to the gods of TV and is charmingly analogue and anodyne when we consider the ransom demands for bitcoin by criminal gangs threatening to leak shows online today.

Of course, this could be reading too much into what was admittedly – and intentionally – an annoying low-fi stunt that bizarrely went viral.

Watch the bizarre hacking incident below!