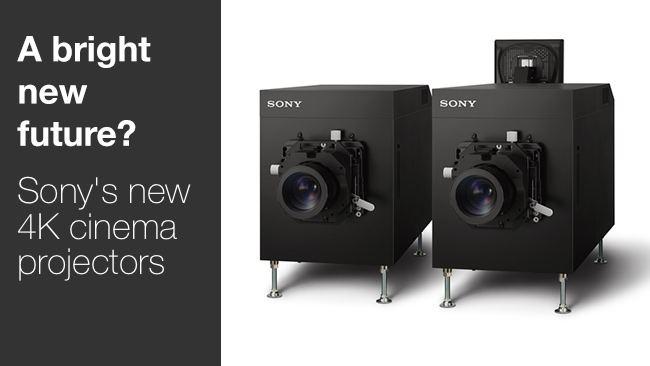 I recently wrote about how Samsung has developed a giant LED screen for use in cinemas, which has made a lot of people start to beg the question as to whether it is still really a cinema if it lacks any projection capability. However, a new product from Sony brings the other side of the coin to the party and flies the flag for cinema projection again. Sony has been leading the way with 4K cinema projectors for some time and now they have developed one of the most advanced cinema projectors the world has seen.

The SRX-R800 Series, which Sony already previewed at both CinemaCon in Las Vegas and CineEurope in Barcelona earlier this year, is 4K HDR compatible and uses laser technology to project the images on the screen - in this case, native DCI-compliant 4K, as these projectors are designed for theatrical cinema use. It also delivers an image that is brighter than existing projectors at the same time so it is a double whammy in terms of projector technology. The projector even makes use of Sony’s acclaimed SXRD optical panel technology which can achieve a contrast ratio of up to a maximum of 10,000:1. Sony says this makes all the SRX-R800 series models "the ideal choice for delivering HDR content, giving cinema audiences an even more immersive entertainment experience."

So it looks like digital projection has a bright future especially as it is well suited to larger screens, whereas Samsung’s offering requires a giant LED panel that is presently sold as a product that is fixed at 10.3 meters wide. That screen size is probably closest to the smallest cinema screens out there, but perhaps LED technology will find its feet for smaller auditoriums, whereas medium and large sized venues might go with 4K laser projection. Having said that, Sony has an offering for smaller auditoriums too. They are recommending the SRX-R810P as being ideal for small venues because it is rated at 7,500 lumens. The SRX-R815P can output 15,000 lumens which should make it work well in medium-sized auditoriums.

Some fans of 3D imaging hope that laser projection might solve one of the issues inherent in the system. The 3D lens system causes the overall light output that reaches the screen to be reduced, which results in an on-screen image that isn't quite as bright. All four models in the SRX-R800 series are laser-based, providing a brighter image than conventional digital projectors, which by itself might help overcome some of the brightness issues with 3D projection. All four models can be readily configured for 3D screenings, delivering smooth, easy-on-the-eye images without flashing. However, the SRX-R810DS and SRX-R815DS are dual-projection models that make big-screen 3D presentations even easier, without the additional hassle that lens swapping entails, and without the loss of brightness from the special 3D lens system that is required to make conventional single projection systems output 3D. The Sony SRX-R810DS outputs 7,500 lumens and might find its feet projecting 3D in smaller auditoriums. It sits alongside the high-end SRX-R815DS projector, which outputs an impressive 30,000 lumens and should give plenty of light for a crisp, bright 4K presentation on the largest of today’s cinema screens.

It seems evident that Sony is providing lots of options for cinemas who think they might upgrade to 4K HDR laser projection. It might be that these options will sit neatly alongside Samsung’s giant LED panel offering, since Sony’s powerful laser technology can accommodate larger screens than Samsung’s 10.3 meters LED panel. Sony is offering still more options too as they will even be selling the new laser projectors alongside the existing high-pressure mercury lamp based 4K projectors. Oliver Pasch, who is the Sales Director for Sony Digital Cinema 4K, explained, "We're delighted to give cinema owners an even wider choice of projection options. Complementing our highly popular R500 Series, the new R800 Series lets operators enjoy industry-leading Sony 4K image quality with the highest contrast ratio of any SRX series projectors to date, giving audiences that increased realism in viewing."

Most cinemas have already gone digital with 2K projectors, so the big question for both laser projection and the super-sized LED panels from Samsung is whether cinemas will be prepared to upgrade their existing 2K systems to new 4K technologies. They may see their existing projectors as something that is already working, and in which they have invested a lot of money that they need to recoup. One big advantage that laser projectors have, is that they can run for a lot longer before they need maintenance. Regular digital cinema projectors generally use Xenon lamps that require replacing over time to address the issue of reduced light output that develops as they age. Replacing the Xenon lamps is both a cost by itself and it's also a hassle in terms of swapping out the old lamps for new ones. The cost-saving in upgrading might give cinemas the impetus to switch up to 4K laser projection as it should require a lot less maintenance, but there is also the inertia factor of just sticking with what they have and with what is already currently working for them. Sony says that the SRX-R800 series models can run for up to 35,000 hours while remaining within 80% of their original light output.

Projector operation for the SRX-R800 series models is managed via a large, intuitive 15-inch colour touch panel. Seamless integration with Sony’s Theatre Management System and other compliant Management Systems allows operators to set up projectors, manage content and create a complete show schedule. This additional ease of use in terms of management of the projection systems might be another selling point for theatres.

Models in the SRX-R800 Series

Sony has 4 models in the SRX-R800 series, except in Europe where they have decided to give us slightly more limited options. The two options for Europe are the SRX-R815P, which is the brightest of the single projection models at 15,000 lumens and the SRX-815DS, which is the top of the range Dual Projection model that outputs an impressive 30,000 lumens. The complete lineup consists of: