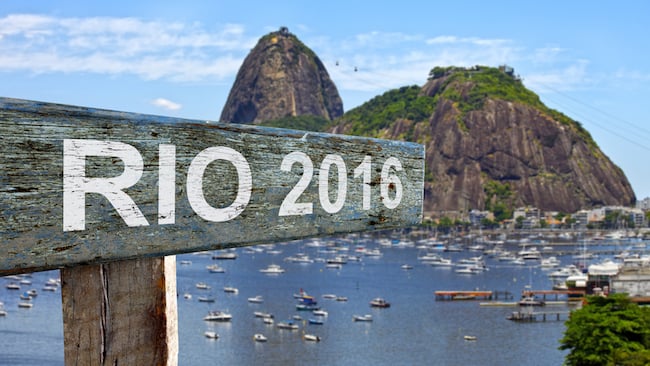 The signs point to Rio, but in what format?

As the world’s broadcasters gear up for their biggest event on the four-yearly calendar, are we witnessing the start of the next technological cycle that ends up with 8K in the world’s living rooms?

Make no mistake, the Olympics are the biggest event in the entire broadcast industry. The FIFA World Cup comes close, but with the US obsessed by coverage as well, the Summer Olympiad is the largest, most expensive, and also most technologically ground-breaking event of them all.

It’s no overstatement to say that it’s this event that everyone has been concentrating on for the past four years since the last fireworks of London 2012 faded into the nighttime sky. Manufacturers on both sides of the fence, pro and consumer, sync their development cycles to the Olympics and, if a product does well here, it will do well throughout the rest of the industry and for the next four years as endorsement by host broadcaster Olympic Broadcasting Services (even though it never officially gives one) is the gold standard by which everything else is judged.

So, what do we know about this year’s event and what will Rio 2016 tell us about the next technological cycle?

Well first, it tells us there’s still a gap in the market caused by the failure of Stereo 3D. Consumer adoption of broadcast tech tends to run one Games behind the previous one, so for the industry Beijing 2008 was the HD games, but it wasn’t until London 2012 that the broadcasters felt able to target the 42in HD set as the baseline spec for the viewer. That same games though was the event that signalled the beginning of the end of the Stereo 3D renaissance, as witnessed by the fact that none of us are going to be watching anything from Rio 2016 in the format — and indeed didn’t watch anything from the World Cup two years ago in it either.

So, with 4K transmission pipelines from the national and free to air broadcasters that tend to hold the rights to Olympic content not yet in place, it almost feels like we’re skipping this one from the consumer end, which is going to be firmly locked in to 1080i. At the broadcast end though, the fizz of technological ferment is very much in the air.

Around 7000 hours of content all in all will be recorded from the Games, up impressively from the 5600 of the last time, and something in the region of 130 hours of that will be produced in 8K using NHK’s Ikegami-designed SHC-1 OB truck we wrote about last month with a separate audio truck handling the complexities of the 22.2 audio

Unsurprisingly, Ikegami cameras are also going to be used for the production, the latest SHK-810 models being light enough at around 9kg to be handheld, while, according to SVG Europe, the production is going to work on site by splitting the feed into 16x HD SDI signals round the trucks and . Slo mo is going to be produced from upconverted 4K units.

Quite what content is going to be produced in the format is unclear, though the Opening Ceremony is a cast iron cert and OBS has said that it wants to try it out on a range of different sports, acknowledging that the editorial language might change with the move to higher resolutions.

Watching anything from Rio in 8K is going to be slightly less easy. OBS is planning on showing 8K content inside the production hub of the International Broadcast Centre at Rio on a whopping 350in screen, which should definitely get the broadcasters’ attention. Given NHK’s involvement in the project there will also probably be test transmissions in Japan too and, as with London 2012, there may well even be the odd public screening as broadcasters look to iron out any remaining transmission issues with the format. News of those will probably surface nearer the event.

If getting access to the 8K feed is going to be difficult, watching select Olympic events in VR is going to be a lot easier. At least one event a day is going to be live streamed from the event, with broadcasters round the world having an option to pick up the content and pump it through their own sites. It’s an important test: OBS trying to work out how best to position the four rigs it’s planning to use to best capture the nature of sports with very different speeds and fields of play.

The elephant in the room

VR, 8K….You will have noticed by now that there is no 4K planned from Rio. OBS has consistently said that there is no demand for it from broadcasters, and indeed it has a point. The business side of the industry dictates that those rolling out 4K services in 2016 are pay-TV providers, and in general those aren’t the ones with Olympic rights.

That said, it is perhaps surprising that not more is being produced from the Games in the format. Indeed, the only 4K that we know about to date will be produced from a down-rezzed version of the 8K signal and is presumably destined for the post-Games highlights package market.

There will be some HDR tests undertaken at the Games, both by OBS itself and by national broadcasters such as America’s NBC, but again access to those images is going to be very restricted.

In some respects it feels like a wasted opportunity. There is innovation in Rio (and in terms of coverage plenty of it, with 16 cable cams deployed, the promise of POV shots from the likes of canoeists, and a big ramp up in the amount information available for second screen viewing) but it’s not the four yearly stampede to buy a new set the world’s consumer electronics manufacturers would like.

That looks set to be Tokyo 2020, by which time the baseline spec will be 4K HDR. And if the evidence of 2016 is anything to go by, there is even a good chance that that will be being produced for the rest of the world from the down-rezzed 8K signal being beamed out to Japan too.

Update 18 June: It has been announced that NBC will transmit one event per day from the previous day's competition in 4K. Still nothing live...