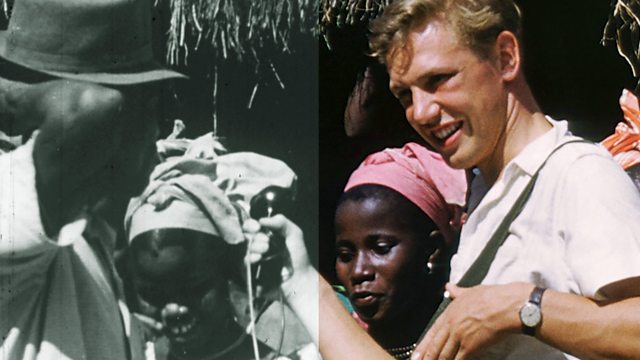 The BBC recently had a bit of a surprise while going through its archive. First, it found the original film elements for David Attenborough's first major production at the BBC 'Zoo Quest'. Previously there were only low quality tele-recordings available, basically 16mm film shot off a CRT screen. An archivist at the natural history unit in Bristol has now discovered some of the original camera negative of the location shoots which were all shot on 16mm film. Obviously this was great news as now the series could be upgraded with high quality HD scans direct from the original negative giving a huge upgrade in quality. The studio discussions were shot on video so that part would have to remain as on the tele-recordings, but now some of the location footage could be taken to a new level.

There was a further and much bigger surprise, however, as the camera negative turned out to be in colour. The series was made in 1954 long before anyone was even seriously thinking about broadcasting in colour and even the editing work prints were in black and white, so nobody had ever seen the footage in colour — even at the BBC. In fact almost everyone remembered the show being made in black and white so it seemed impossible that there was now colour negative of it sitting forgotten on a shelf.

However it really was the Zoo Quest footage. It turns out that the BBC film unit of the time were not at all happy that David wanted to use small 16mm cameras for the production. The BBC was apparently very hostile to 16mm. (The more things change, the more they stay the same!) 16mm wasn't considered professional and the BBC was insistent that they wouldn't allow it. However, the 35mm cameras of the time were huge in comparison and would have been impractical out in the field. In the end David convinced them to let him use small clockwork 100ft 16mm cameras, but the BBC insisted on one provision: they would have to use low speed colour negative stock as the BBC felt that the black and white stock would be too grainy in 16mm. The hope was that the lower grain of the slower stock would make things a bit more acceptable. This compromise ended up bringing about the first use of 16mm film at the BBC.

In practice though, the slower colour stock caused a lot of issues out in the field forcing the production to get creative. It was just too dark in the jungle to get an exposure on the film so they decided to work out what kind of creatures they could shoot more out in the open. Birds were sometimes a possibility but they hit upon the idea of also shooting insects and other tiny creatures and DP Charles Lagus improvised a macro extension tube to get in close. Macro shots of tiny creatures have obviously since become a staple part of natural history production, but at the time it was just a way of dealing with the slower speed colour film.

Sometimes they got lucky and were able to catch some larger animals running out in the open and the lightweight cameras definitely came in handy in that context, but they ended up shooting certain climatic shots on B&W film anyway because they could only capture those creatures in the dark of the jungle. Zoo Quest went on to become quite a hit with the public, and it was this series that launched David Attenborough's subsequent glittering career.

It's not quite clear how much of the camera negative for the series has been found. There is presently talk of having all the footage from the first three episodes but it's clear that there is also at least some footage from the famous "Zoo Quest for a Dragon" episode too. Maybe even more camera negative will turn up on another shelf somewhere at some point, but in any case, what has been found makes a huge difference already.

Now that the colour elements have been scanned in at high definition the improvement is incredible. Beautiful skin tones and fantastic colours alongside the obvious improvement in resolution from going back to the original negative as opposed to a CRT film recording many steps removed from the original.

If you have access to the BBC iPlayer you can see the upgrade in quality for yourself here.