Live streaming with the VidiU Pro 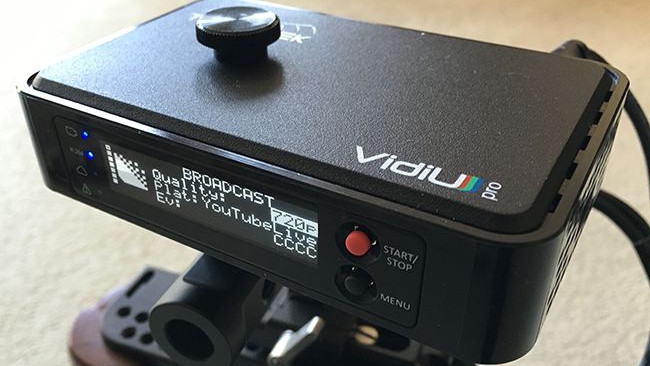 A detailed look at the Teradek VidiU Pro, which aims to greatly simplify the workflow for live streaming broadcast.

It perhaps isn't at the forefront of most video producers minds to do a live broadcast. But if you were approached to do such a thing, how would you go about it, particularly if you were on a budget?

Live broadcasting on platforms such as YouTube has opened up the types of live subject matter that used to be the domain of the established broadcasting companies to the public at large. The Adidas Sickline event and the Hurley Classic on the Thames are two examples of minority sports competitions that are now broadcast live over streaming services to fans who would otherwise not get to see them.

It can still be an effort to make such things work, however, and that is where Teradek's new VidiU Pro system comes in. The VidiU Pro has one aim: to make live streaming as simple and as straightforward as it possibly can be, from anywhere in the world, even in more remote locations. As long as you have a wired, wireless or cell connection, you will be able to perform a broadcast. Even if you don't, the device will record your programme ready for streaming later.

What's in the box?

The VidiU Pro is a small device, with a footprint of around 120mm x 80mm, and it looks very simple. On the front, there is an LCD display to show menus and device status, along with lights to indicate wifi, streaming connection, alerts and whether a camera is successfully connected. Along with a start/stop button and a mini menu joystick, that's about it. But as we'll find out, that's all there needs to be.

On the back, there's a DC in, Ethernet in, a reset button, HDMI in and headphone monitoring via a 3.5mm jack, as well as a 3.5mm mic/line in socket.

No instruction manual was supplied, but this can be downloaded through the Teradek website, although it is only a quick start guide. Accessory wise, an AC adapter is provided, along with a cold shoe mounting system and an Ethernet cable. Puzzlingly, a full size HDMI to mini HDMI cable is also supplied. Personally, I cannot see the point of this, because so many cameras these days are a mix of micro HDMI, mini HDMI and full size. A more practical solution would be to supply a standard full size HDMI cable.

What do I do with it?

This is the first question I had to ask myself when I initially examined the VidiU. After a quick visit to the Teradek website, I downloaded the VidiU iOS app. This, as I found, would be the practical heart of the system.

The VidiU Pro can combine connections in areas where reception or the internet may be slow. This means that you can combine up to four mobile data connections, wireless and wired internet. This connection bonding is performed through Teradek's subscription service called ShareLink. I'll come back to this later.

The most straightforward way to connect the device and get started is to hook it up to a network using an ethernet cable or to join a wireless network. Booting up the VidiU app on the same network as the device will identify and connect to it easily. Within the app, you can set up the login details of the streaming service you wish to use. Currently, Lifestream, Ustream, YouTube, Twitch, Live:Air and Wowsa are officially supported.

Setting up such accounts was very straightforward and, after a small amount of investigation within my YouTube account, I was live streaming to it within minutes. The whole process was quite intuitive. You can also preview the stream before going live, to make sure that everything is working.

The quality of the stream will naturally depend on the quality of your connection. The app makes it very simple to choose your streaming quality and even includes a speed test to determine the best resolution. The device will perform real-time adaptive bitrate adjustments, too. If you are really stuck, you can record your broadcast in a stream-ready format onto an SD card, inserted into the VidiU device itself, or to a FAT32 formatted USB hard drive, ready for streaming later on when you have access to a better connection.

However, as I mentioned earlier, there is another option for getting a more efficient connection called ShareLink. ShareLink is a subscription service by Teradek that makes the bonding of connections transparent and easy. There's no real setup to speak of. It just works.

Using this service, you can stream via ethernet, for example, plus up to four mobile devices. The device itself has a USB port that is compatible with 3G and 4G/LTE dongles, too. One thing I did discover is that if you are going to bond mobile connections, it is better to make sure that each phone is connected to a different carrier, to ensure the maximum bandwidth is available. If any of these devices fails, your broadcast will still work. There's a lot of redundancy in this method.

Subscriptions for ShareLink start at $19.90 per month for up to 22 hours of 1080p streaming, through to $49.90 per month for unlimited data. However, there is one caveat in that if you have more than one VidiU device, you will need to pay again for each additional device. That said, you might be thinking that, if you had a multi-camera broadcast, this could get expensive. However, the effective way to achieve a multi-camera stream would be to feed the output from your mixing desk into the VidiU device and then this will be your live edited stream. The device is so small that it won't take up any room at all.

All was answered when I made the wireless connection. Or ,at least, I found that it worked! When you hook up to the VidiU Pro's wireless network, your cellular data connection is still active. In other words, it isn't like a standard wifi connection where the wifi replaces your mobile data. Because the VidiU app on the phone was configured to use the ShareLink account, video frames were now being split between the wired network and my mobile phone data connection. It's very simple to set up once you start to configure it.

I was advised that, with Android devices, it is better to use Client mode. With this method, the VidiU Pro connects to your Android device when it is in hotspot mode. Unfortunately with Android, you can only connect one device at a time, compared to four for iOS systems.

For what at first seems to be a simple device, the more I played around with it, the more I realised how clever the design is. When you consider what must be going on behind the scenes as it were, making live broadcasts this straightforward can't have been an easy thing to achieve.

There are a couple of things that stand out to consider. The first is, from a practical point of view, if you are mounting the VidiU onto a camera. If you only have one HDMI out from your camera, you will need some sort of splitter if you also use an external HDMI monitor.

The second is power input. The VidiU accepts a DC input, but it also houses an internal li-ion battery, which will keep it going for a couple of hours. There is no ability to attach external batteries conveniently, but you may be able to rig up an external box with DC out if you need longer.

The VidiU Pro is a pretty niche device and so it won't be something most of us use on a day-to-day basis. I was pleasantly surprised at how straightforward it was to setup and it is impressive how Teradek has taken what could be a very complex operation and made it almost as easy as 1-2-3. The device itself is well-built, but not heavy enough to be cumbersome when camera mounted.

If live streaming and programming is something that you would like to embark on, then it would be well worth giving the VidiU Pro a look. At £900 ($999 for our US friends), it would seem to be a very reasonable price to pay for such a capable system.