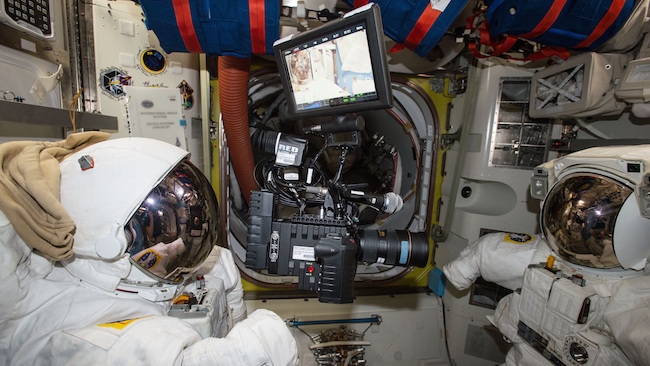 Shooting on the iSS with RED

4K TV dealers are perhaps about to get their most powerful sales tool yet: an ambient video channel designed to highlight high quality, high beauty images from the space programme. Meanwhile 8K approaches launch.

NASA TV UHD is going to use an end-to-end 4K video delivery system from Harmonic and a test signal of the 2160p60 channel is currently available on the AMC 18C satellite. Expected launch date is November 1 2015 and discussions are 'ongoing' about widening the distribution to various other pay-TV outlets (online streaming is a given for those with a 13Mbps pipe).

As well as high-resolution still images and video generated from the ISS, Hubble, and elsewhere, programming will also include remastered footage from historical missions, shots from NASA's development and training processes, and ultimately live launches.

Interestingly —and excitingly for us space geeks — NASA and Harmonic have also begun discussions about adding HDR imagery into the mix and expanded colour-space technologies to the channel as standards emerge. Some testing is expected before the end of the year.

This is niche, perhaps, and it’s certainly got a geek element to it, but this is also an important step. There are some technical details in the paragraphs below that illustrate how this can be done in the here and now by any broadcaster with the will to do it, all of which means that the 4K distribution side of content is going to be expanding into the mainstream *much* earlier than anyone forecast.

We are just going to add one corollary: 8K. News from IBC is that 8K is also coming *much* earlier than anyone forecast. First we had the Canon EOS 8K announcement, then confirmation that NHK in Japan is powering ahead with its schedule of test broadcasts in 2016, significant satellite TX in 2018, and widespread deployment in time for the Tokyo Olympics in 2020.

Talking privately with some niche manufacturers in the broadcast space, we have already heard of some smaller companies that are putting a brake on development while they wait to see which way they should jump: 4K or all the way to 8K. Now, this still remains a bit of an outlier as far as positions go, but it does indicate that there is nervousness in the industry about the resolution format of the future (especially in Japan) and it’s not beyond the laws of possibility that that could spread. And if it does, that could also mean that the breakneck pace of current 4K progress might get slowed up. The next year or so, and the run up to Rio 2016, should see.

Anyway,  the tech details of how the new channel is being distributed are below the trailer.