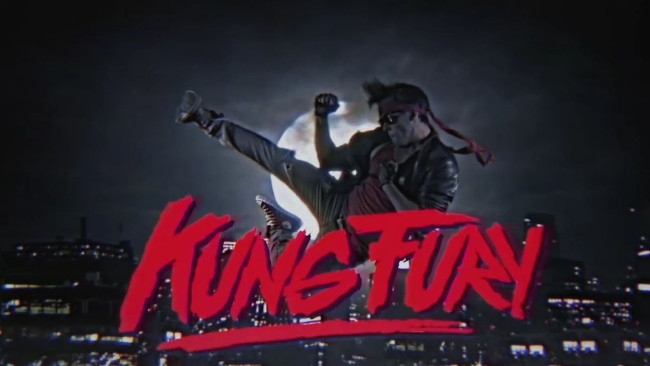 8K? 4K? HD? No. This is the only contemporary film to have been downgraded to VHS quality to give it that oh-so-smooth '80s look. And it's a masterpiece.

(This is a quick preview of this remarkable film. Recently, Dell flew us to Stockholm, to visit their customer Fido, a Post and VFX facility that worked on over 400 scenes from the film. We'll be posting our full report soon.)

Kung Fury is a short film produced, written, directed by and starring ex commercials and music video director David Sandberg. Kung Fury has built up a bit of a following online ever since it was first crowdfunded through Kickstarter.

Starting with an initial aim of raising $200,000, it went on to raise a staggering $630,000, though still falling short of the $1M that would have been required to make the production feature length.

The film is never the less a staggering achievement, making use of some amazing CGI combined with live action and greenscreen to produce a wonderful homage to the sorts of action films we loved in the 80s. Kung Fury is utterly bonkers, with so much surreal humour that at times you may wonder what on Earth is going on.

The story tells the tale of Police Detective Kung Fury, whose partner, Dragon, was killed while apprehending a red ninja. Kung Fury inherited super kung fu powers after being struck by lightening and bitten by a cobra! Now, he has to face down his ultimate foe, Adolf Hitler (aka Kung Fuhrer), who has travelled through time and is going on a criminal rampage. Kung Fury now has to go back in time himself to stop the Fuhrer before he gets a chance to enter the future.

I did say that it was bonkers, but also truly very funny and brilliantly executed. Along the way, Kung Fury is assisted by Hackerman, the Norse God Thor, his new partner Triceracop and a couple of Viking women for good measure.

Using a combination of a Canon 5D Mk3 and a Sony FS700, the production is top notch from the very beginning with the picture being made to look like you are watching it on an old VHS player, complete with tracking errors. The soundtrack, produced by Swedish groups Mitch Murder and Lost Years, is also incredibly well-done and sounds just like it was made back in 1985. Sandberg even went so far as to get David Hasselhoff to make a music video called "True Survivor" for the film, something that is worth watching in itself. Although be warned, the tune will stick in your head permanently! You can even get hold of the soundtrack on vinyl if you so wish.

Aside from being an entertaining watch, Kung Fury is a good lesson in how crowd funded projects should be done.

Warning. Contains comedy violence. Do not watch if you are offended by, well, just about anything.