Trouble Ahead for Broadcasters? 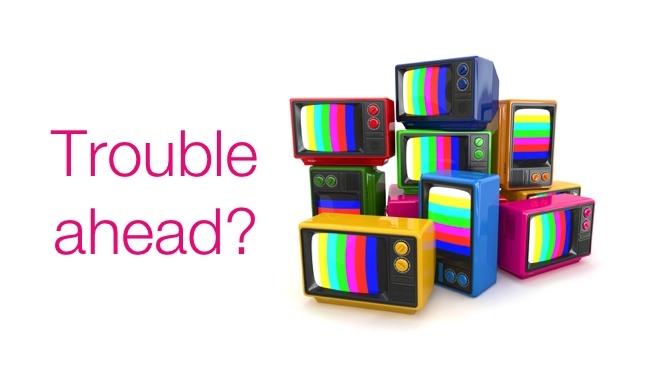 There may be trouble ahead for conventional broadcasters, explains Andy Stout

You may not necessarily have heard of the International Association of Broadcast Manufacturers (IABM) but it’s an influential trade industry body that researches the market on behalf of its members. Its reports are essential reading as they let its members know whether they should invest, or man the lifeboats. And the latest has a clear message: learn to swim, rapidly.

The first surprise was exactly what the survey’s respondents (who, it should be pointed out, were a sample size of 1000 made up of broadcasters, suppliers and ‘others’ - consultants, commentators, the press etc) thought was the major change affecting the industry. The result? IPTV a clear winner at 49.1% of replies. HD and 3D? 0.7%. 4k? Search your way through the whole report and one person mentions it once.

Admittedly the survey was undertaken before IBC and 4k has probably moved substantially up the radar since, but its absence highlights the fact that its introduction doesn’t really worry the industry.

It’s a step change, an upgrade to the pipe joining the broadcaster to the viewer, and its one that’s already been undertaken several times, first from monochrome to colour, then to digital widescreen, then to HD. What *really* worries people is a fundamental shift in the underlying principles and that pipe being ditched all together.

Adrian Scott of the Bakewell House Consultancy put the report together. Was he surprised at the strength of IPTV as a change factor? Especially given that other 'conference favourites' such as 3D and social media barely registered?

“No, not at all,” he says. “I think it's a "no-brainer" that the future of broadcasting is inextricably linked to the internet, and IPTV is just one manifestation of that. Social media is really another, and I would lump it in with all the other internet based disruption. As for 3D, I think it's been apparent for some time that the public isn't really that interested in 3D in the home, at least not in its current form and with its current technology level, and the industry is facing the hard truth that 3D is not going to provide the same kind of bonanza that HD did. Or at least not yet, until people don't have to worry about wearing funny spectacles, or sitting in the right place, or dipping in and out of the immersive illusion when they want to stop watching and pick up their cup of coffee.”

The report then ups the ante considerably by asking if broadcast as we know it is dead or dying. That might seem like a hyperbolic question, but away from the cutting edge of technological change, even the most optimistic attendees have picked up that the undercurrent of all recent tradeshows has essentially been one of worry. “What was once an orderly, even comfortable world is now chaotic, unpredictable and characterised by threat and opportunity in equal measure, for broadcasters and suppliers alike,” says the report’s summary.

“To me, it's all about coping with change, says Scott. “Manufacturers and service providers must wake up and smell the coffee: broadcast engineering has become a branch of IT in almost all respects. Cameras, tripods, lights, virtual studios, OB vans - they are all important parts of the "acquisition" and content creation business. But once the stuff is captured, it’s data and everything else is software. “

All of which points to a deeply uncertain future as far as Scott is concerned.

“As far as the traditional manufacturing fraternity is concerned, There Will Be Blood,” he says. “The ones who survive will be the ones who carve themselves a niche in the new IT-driven world, who anticipate what their customers, the broadcasters, actually want and need in order to satisfy the demands of THEIR customers, the consumers. I'm not sure that everyone is going to be able to stave off disaster.”

Keeping up with change

“It's back to the question of coping with change: we are experiencing the most profound change our industry has ever seen, affecting every aspect of that business from end to end, and all happening at once. When the creation, management, aggregation, demand, delivery and consumption of a given commodity are all changing rapidly at the same time…along with the business model and financial basis of the industry which supports it…then only the most agile will survive.”

What does RedShark think?

The key is in flexibility. Understanding file-based content creation and delivery is essential to survival. Once you’re in the file-based domain, you’re in a strong position to purpose your material for delivery, whether it’s traditional broadcast, IPTV or on-demand.