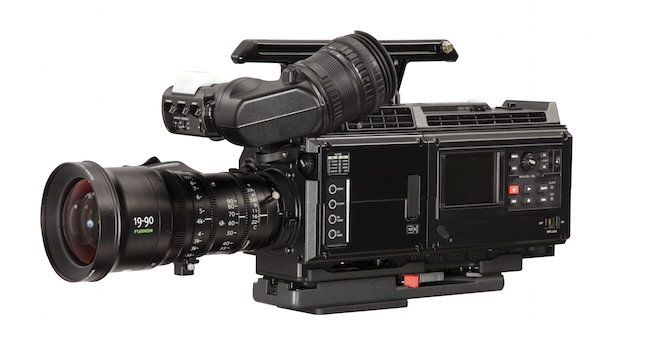 NHK is still pushing forward with its 8K Super-High Vision television project and is planning to begin test broadcasts in Asia next year (2016) with an end goal of broadcasting the entire 2020 Olympics in Tokyo at 8K resolution. To this end it is working closely with Hitachi on developing new 8K video cameras and the latest fruit from this collaboration is the SK-UHD-8060, an 8K camera with a 33-million pixel CMOS sensor.

The new camera is at first glance a technology demonstration or prototype, although Hitachi is also saying that if NHK or someone else with the right resources were to order the camera they could go into production of it right now.

The SK-UHD-8060 weighs about 13 pounds and works with a 12-inch 4K viewfinder. Power consumption is about 60 watts. A SMPTE304/311 type hybrid cable system is used to tether the camera head from its control unit, while it uses 40Gbps fiber optic cables to transmit 8K, 4K and 2K video feeds simultaneously.

It would appear that potentially the cameras could be used in a 4K studio where they would be available for a possible upgrade to 8K in the future, but would also allow downsampling to UHD for the more immediate future.

NHK has always been keen on the idea of skipping right ahead to 8K Super-High Vision television on the basis that by the time the broadcast industry is genuinely ready to upgrade to UHD the technology for 8K broadcasting will already be easily available. Hitachi seems to agree. "8K broadcasting is on the verge of becoming a reality, and it will undoubtedly become the mainstream past 2020," said Sean Moran, Hitachi’s COO and Vice President of Sales and Operations.

The camera can also record in 8K raw to its SSD recorder with a running time per disc of 40 minutes. Perhaps this could even open the camera up to being used in digital cinema applications? It seems unlikely this will happen, however, given that RED has already announced an 8K sensor upgrade for its Weapon camera system. Red are a much more known brand in the field of digital cinema and at present there are no plans for the Hitachi camera to go into mass production.

The camera might also be handy in sports broadcasting where it might be possible to zoom in digitally onto the action after it has happened. 4K cut outs from 8K pictures, anyone?

No prices, no release dates, but with the 2016 date for trial broadcasts fast approaching now, we suspect that there will be further news on the NHK 8K project soon.