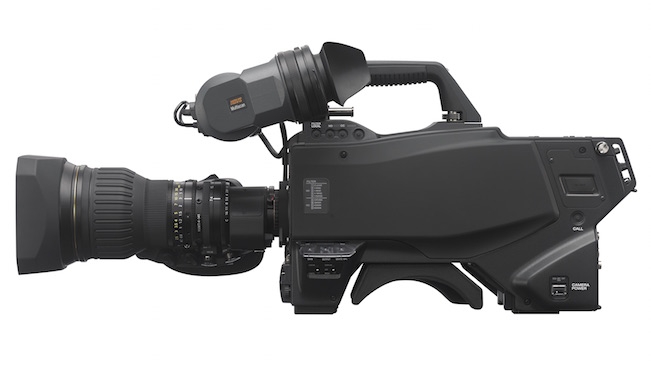 ‘Game-changer’ is probably the most overused phrase at this year’s NAB, but in the shape of the HDC-4300 Sony might just have the real article in its hands, not just for the company itself but for the whole industry-wide introduction of 4K.

Sony’s own headline about the camera dwells on it being the world’s first 4K system camera with three authentic 4K image sensors (2/3-inch since you ask), but arguably the most significant thing about the unit is its backwards compatibility. It not only supports the same B4-mount lenses and control surfaces as Sony’s industry leading HDC-2000 series camera, but also all existing HDLA-1500 series control and shading systems, viewfinders and master set-up units are all interchangeable between the HD and 4K systems.

All of which means you can now effectively parachute 4K cameras into a live HD set up — studio or OB, it bridges both — and not only keep camera angles, zoom ranges and iris settings, but also have a familiar camera that operators can just pick up and shoot with. This is hugely significant. 4K broadcast shoots to date have all had to effectively be bespoke, but now OB and production companies can just rock up at a venue with their old camera plans and adapt them lightly, not rewrite them from scratch.

What’s more, it’s multifunctional enough that you’re not killing any other camera positions to deploy it either. 2x and 3x super slo-mo is standard, while step down to HD and up to 8x can be achieved. And, and perhaps this is the clincher, the 4K capabilities are activated by a weekly, monthly or permanent license, giving purchasers a huge amount of flexibility over its eventual use.

If Sony prices this right — a summer 2015 release date is all that’s confirmed on that score just yet — hire companies are going to love this camera as it provides a robust and, what’s more, retractable bridge between HD and 4K.

Around 80% of all primetime live sport and entertainment is captured using HDC series cameras in the US. And with the likes of Bexel, Game Creek Video, NEP, CBS Sports, CBS Television City, ESPN, Fox Sports and NBC Sports all indicating their support for the new unit, it’s hard to see that changing in the transition to 4K.

We haven’t even got round to mentioning its support for Rec.2020 colour spaces yet either…

The full release is, as ever, on page 2.

The HDC-4300 delivers 4K/HD capabilities for Sports and Event Broadcast;
Up to 8X Super-Slow Motion in HD Resolution and Proven HDC Series Performance

Las Vegas, 12 April 2015 – Sony’s next generation of HDC series camera technology provides the ability to use the high magnification wide zoom range lenses currently employed by HD 2/3-inch systems while maintaining an adequate depth of field to accurately show all the action during live event broadcasting.

The new HDC-4300 is the world’s first camera to use three 2/3-inch 4K image sensors¹. It supports the same B4-mount lenses as well as the same control surfaces as Sony’s industry leading HDC-2000 series cameras. The existing HDLA-1500 series, control and shading systems, viewfinders and master set-up units are all interchangeable between the HD and 4K systems. Directors and operators can keep their approach to live events -- including camera angles, zoom ranges and iris settings – while using familiar camera technology.

“This camera provides 4K capabilities and a workflow that content producers are instantly familiar and comfortable with,” said Norbert Paquet, Strategic Marketing Manager, Sony Professional, Sony Europe. “We’ve developed the HDC Series as a flexible platform for our customers to maximize their ROI on multiple applications. The HDC-4300 is multi-format for daily HD applications, sports on the weekends with up to 400fps, and futureproof with 4K acquisition.”

The new HDC-4300 is capable of 4K/HD operation, with2x, 3x Super Slow Motion as standard, and higher speeds up to 8x available, to produce high-quality replays and specialty program effects.

The addition of other 4K products, such as the PWS-4400 multi-port 4K/HD Live server, a multi-format switcher capable of real-time 4K signal processing based on the MVS-8000X, and Sony’s new BVM-X300 4K OLED or PMW-X300 4K LCD monitors creates an end-to-end 4K live production solution.