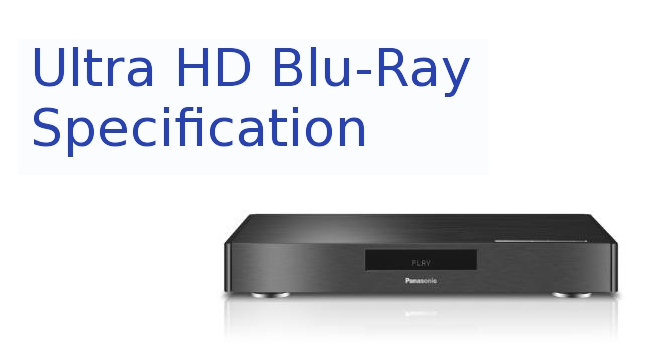 Finally we have some substantial early news on the 4K Blu-Ray front, only it's not going to be called 4K Blu-Ray but ULTRA HD BLU-RAY™.

Panasonic are showing an early player at CES but it's still just a prototype which means that, sadly, we are still some way away from devices actually being for sale. This could be a problem as the streaming world is working hard at making 4K a viable means of delivery. There is now 4K YouTube, Netflix is making all its new content in 4K and Amazon just launched its Amazon Prime Instant Video 4K service in December. Even Vimeo is making some small moves into 4K. It seems likely that many of these companies will be working hard to make 4K work in spite of the restricted bandwidth on most people's internet connections, which could mean 4K only really being viable for high end consumers.

So on the face of it, it would now appear to be getting a bit late in the day for UHD Blu-Ray given that it isn't even available to buy yet. However there is some really big news: we finally have some specifications for the new generation of Blu-Ray and it isn't going to be just about the arrival of UHD resolution.

The new format is going to support high dynamic range. BT.2020 wide colour gamut and will actually be 10bit. The new standard is also touting HEVC/H.265 playback at up to 100Mbps which is a far cry from the tiny 15.6Mbps or less that streaming services are using for 4K. Whether it will be practical to encode discs at such high bitrates we will have to wait and see but the equipment is capable of playing it.

A lot of people have been saying how they would rather have 10bit video over more resolution for some time but now it appears we have the option to have both! The inclusion of Rec2020 means that the UHD BluRay will also be able to show far more colours than were previously available with the Rec709 colour space used in the past. So we are looking at more colours and smoother graduation between those colours.

So basically it’s still possible that UHD Blu-Ray could arrive and really shake things up in terms of quality because it has amazing new features, beyond just resolution, that streaming services lack. At this point however they do need to move fast to actually get it out there.

Here are the specs of the new format:

High Dynamic Range A technology that drastically expands the brightness peak from the previous 100 nit to 1,000-10,000 nit, marking a significant leap in the dynamic range of the picture. Bright light sources (e.g. lights or rays of the sun) and reflected light (from metal or water) that up to now were difficult to display can now be shown in rich textures.