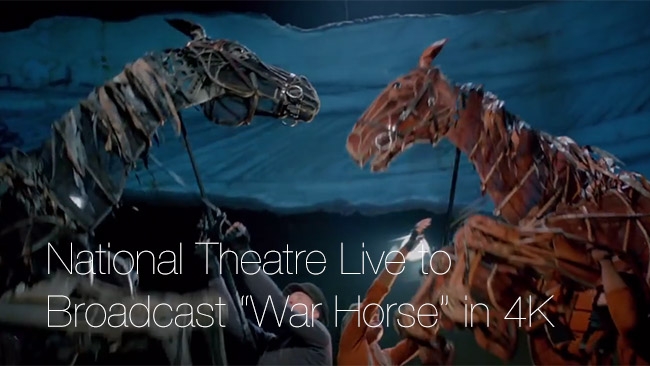 Since 2009 the National Theatre in London has been broadcasting selected productions to Digital Cinemas around the world. On the 27th of February they will set a new standard when they broadcast "War Horse" live via satellite in 4K

London's National Theatre have been at the forefront of the live transmission of theatrical performances into digital cinemas worldwide. In fact since 2009 they have broadcast more than 20 productions to over 500 digitally equipped Cinemas around the world, where they have been watched by over 1.5 million people.

As well as the live broadcasts recordings are made so that they can also be repeated later to fit in with local time zones and demand.

Up until now the broadcasts have been in HD, but on the 24th of February they will be shooting and transmitting their stage production or Michael Morpugo's play "War Horse" in 4K.

Creative Broadcast Solutions and NEP Visions have been working with National Theatre Live for some time. Now they will be working together with Sony to create the infrastructure to enable live 4K transmission.

The show will be shot on Sony F55 Super Cinealta Cameras, which will generate simultaneous 4K and HD streams. The 4K streams will be vision mixed live and then sent to Links Broadcast Satellite Uplink truck to be sent via SES Astra's 3B satellite using 36Mhz of capacity to the Curzon Cinema in Chelsea, where it will be projected on a Sony 4K Cinema Projector.

The show will also be sent to over 1000 cinemas in HD, and a 4K DCP master will be made allowing for later screenings in other 4K equipped Cinemas worldwide.

Emma Keith, Producer, NT Live, commented, "NT Live is delighted to be at the forefront of this new technology and to continue being at the cutting edge of live broadcast, particularly with our production of War Horse, which at its heart is a show which involves some spectacular puppetry – an art form which is thought to have originated over 5000 years ago."

David Bush, Head of Marketing at Sony Professional, Sony Europe added," At the heart of Sony DNA is the will to push technological boundaries always further. Being able to demonstrate, with the help of partners, a worldwide first live 4K workflow from stage to screen, on a project as well loved and renowned as War Horse, represents a true milestone in the development of 4K technology."

First produced at the National Theatre in 2007, War Horse has gone on to become an international hit, with shows in Australia, America and Berlin. This 4K screening will bring the show to audiences worldwide in stunning quality.

Here is the trailer for the National Theatre Live broadcast: