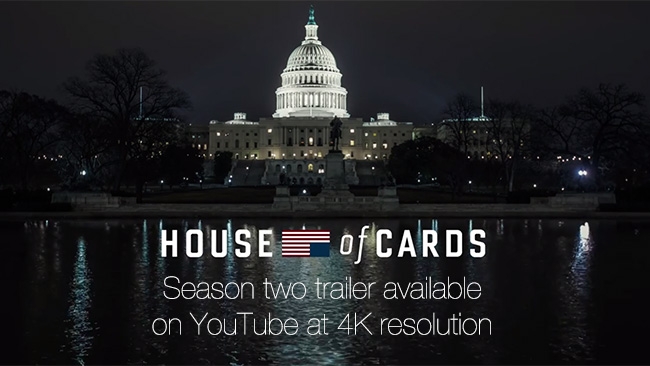 Netflix will release season two of their hit political drama "House of Cards" on February 14th. You can watch trailer now on YouTube, with the option to see it in 4K (if you have the hardware).

Netflix broke all the rules of television distribution when they released all thirteen episodes of the first series of the political thriller "House of Cards", starring Kevin Spacey, on the same day. Audiences loved it and many of them watched the episodes back-to-back, giving us a new expression: "Binge watching" which was the runner up to "Selfie" for the Oxford English Dictionary's word of the year.

A recent survey commisioned by Netflix found that of the people who watch streamed TV at least once a week, 61% admitted to binge watching regularly, with most viewers watching two to six episodes in a session.

I'm sure all the fans of the first series will be eagerly awaiting season two, which goes live on Netflix on February 14th. Netflix have uploaded the trailer for the new series to YouTube, with the option to watch it in HD, 2K or 4K if you have the equipment.

The new series was shot in 4K and Netflix has announced partnerships with Sony, LG and Samsung to deliver 4K streaming to consumers. They also said that all their original shows will now be made in 4k.

Netflix CEO Reed Hastings had this to say:

"Netflix is working with Sony to create a fabulous entertainment experience. When 4K started to be talked about, we saw the Internet as the natural medium to deliver it because most 4K content was going to be available online. We know that content creators are very excited about 4K because of the additional picture range they get to play with. All new original content from Netflix, including season two of House of Cards, will be shot, edited and produced in 4K...and we've been working with Sony to show Breaking Bad in 4K."

"This is very practical," said Hastings. "You can stream 4K over WiFi if you want to. It's testament to the work we've been doing on encoding and what Sony has been doing on decoding."

Check out the trailer after the break