VP9 codec rides to the aid of 4K 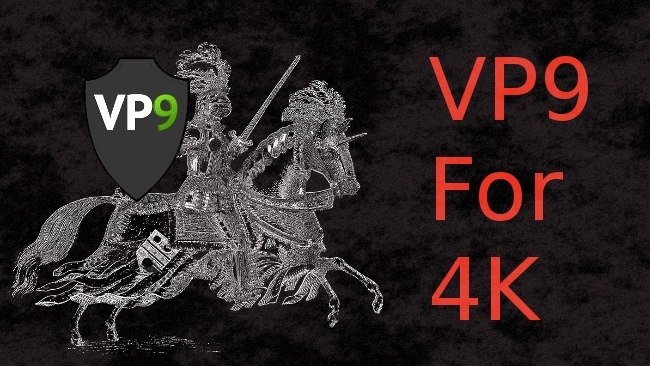 Google have oddly found themselves in a great position to capitalise on the current 4K fervour with their VP9 codec. Google weren’t really thinking about 4K when they developed VP9, it just happened to be a fact of the way the codec was written that it supports up to 16K video! In fact when asked earlier last year if they would be supporting 4K the Google folks appeared somewhat confused by why anyone would want to do that, as obviously they had been designing VP9 with YouTube in mind and were more thinking that this would be a great way of making 720p YouTube streams really viable on normal internet connections.

However VP9 was designed to be much more efficient than its .h264 counterpart (You can save about 50% of bandwidth compared with .h264) while requiring only a similar amount of processing power as .h264 to decode. As it happens this puts it in much the same kind of territory as the .h265 /HEVC codec that is presently still quite far from being ready for prime time. In addition VP9 is open source and unencumbered by patents, HEVC on the other hand needs to be licensed before it can be used in commercial products.

At some point somebody at Google must have clicked that there are all these 4K Televisions being released without content and that content is kind of hanging around waiting for HEVC to become available which is still a way off. At the same time Google are trying to promote a codec that just happens to work at 4K very well right now. Google are also very keen to have YouTube to be supported on televisions as you might expect, so put it all together and we now arrive at the situation where Google is going to be at CES 2014 demonstrating their VP9 tech on the Sony, LG and Panasonic booths. It’s win-win for everyone because it means that Google can promote both YouTube on TV’s as well as VP9, and the TV manufacturers can promote their new Ultra High Definition TV’s with a real, right here and now, well known, video service.

Check out this video where Google not only demonstrates VP9 compared to .h264 but also explains how the new codec achieves its extra efficiency gains.

It’s expected that televisions with built in VP9 won’t arrive till 2015 but the advantages would extend beyond just 4K. It would mean that YouTube videos would be able to really make the most of whatever kind of bandwidth you have available, whatever their resolution. Goodbye spinning pin wheel! It could even become a selling feature in itself, aside from 4K.

Google are now making a big push for hardware vendors to support VP9 and have signed up 19 new partners to support the format including: ARM, Broadcom, Intel, LG, Marvell, MediaTek, Nvidia, Panasonic, Philips, Qualcomm, RealTek, Samsung, Sigma, Sharp, Sony and Toshiba. They have also designed a hardware chipset for fast decoding of VP9 to try and make the whole process as easy as possible for their partners to hit the ground running.

I can see a future in which VP9 is very common, the advantages are obvious and Google are in a good postion to drive support for the format through YouTube. It’s a technology that is in the right place at the right time and could really help to get 4K distribution off the ground.

Read: If you use YouTube, you need to know this.