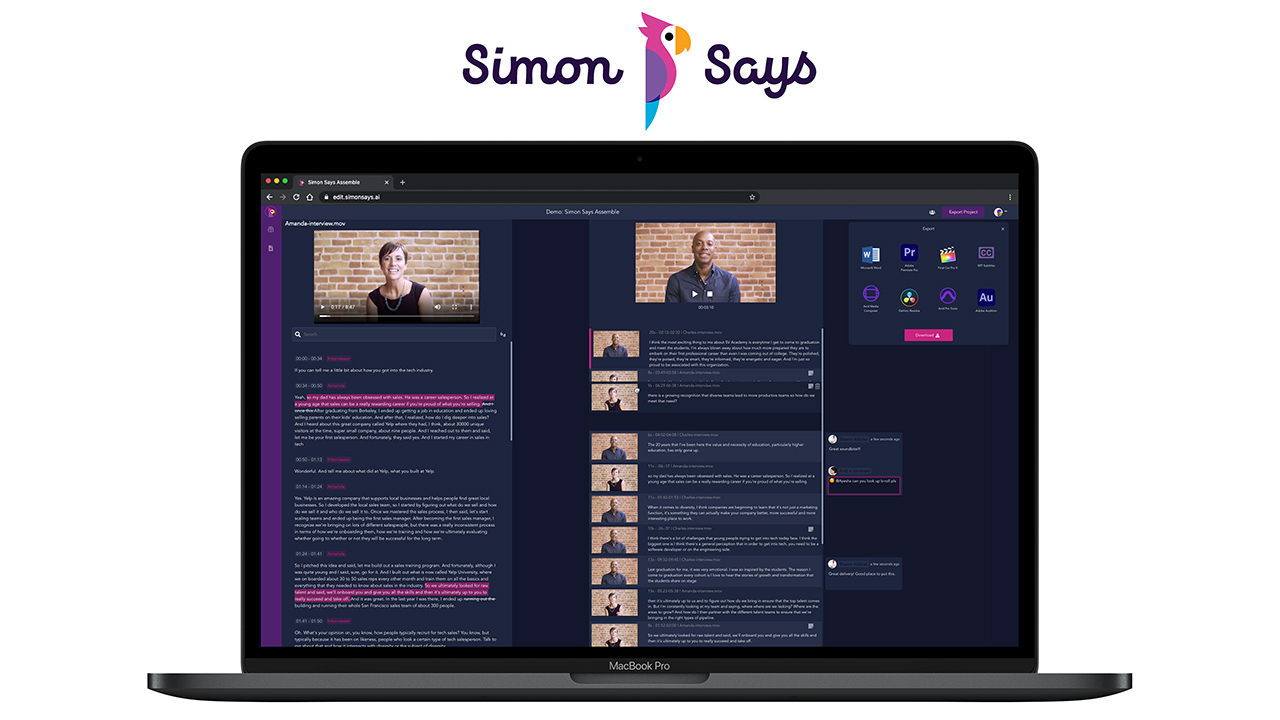 Simon Says is a timecode-based AI transcription platform, and now it is bringing a new service, Assemble, to the table, allowing fast remote collaboration on edits with simple text editing.

Imagine you have a long series of interviews to sort through and find the best parts. It can be a laborious process, and ironically even though it is video, it isn’t very visually intuitive. That’s because audio is, well, audio, and you can’t hear it unless the video is playing.

Written text on the other hand is visual represents spoken audio very well, and it is this concept that makes this new announcement from Simon Says quite compelling. It’s almost taking the idea of a service like Frame.io, which allows comments from clients, but actually allows collaborators to make physical changes to the edit flow.

It works pretty simply. You upload the footage to Simon Says using the web, Mac app, or Adobe or FCP extensions. These are then transcribed by the Simon Says service giving you a full record of what is said in the video clips. The really clever bit is when it comes to manipulating the transcription.

Once the transcription is complete you can then read through it and then highlight blocks of text and assign them as individual soundbites. But it doesn’t end there. Once you’ve highlighted all the important bits of the footage or interview you want to isolate, it’s then possible to drag and rearrange them, effectively creating your story structure there and then. Collaborators can then comment on what has been done, or clients can sign off on things.

This makes for a really fluid exchange of ideas on how a production can flow, and it means that once everyone is happy with the soundbites that have been chosen the work of actually focussing on the creative aspects of editing is made much easier. No more scrubbing back and forth through clips, and the back and forth between collaborators is also minimised.

The main features of the service are:-

The Simon Says system is already used by major broadcasters such as the BBC, CNN, and TED to name a few. When remote collaboration is a buzzphrase that is here to stay, services like this are just going to become more and more relevant.

If you want to try out the service you can sign up for free with a 15 minute credit to see how things work on the Simon Says website.